She moved back all her books and belongings. In our apartment she would look at me from underneath the bed sheets, her bottom half covered, her diary in her hand. She would ask me not to look at her diary. I never have—I remember once she left it on the bed and I stared at it for five minutes. It had a black cardstock cover. I opened it and read the inscription, her full name, the year, how much of a reward she would give if it was returned—20 bucks. I closed it and let it lie on the bed. Her diaries would be here in a closet. I wonder if they might be with the parents. Would they read through them? I wanted to ask her parents to let me move in to her room and let them take care of me.

A small Vans shoebox on the desk that I know is full of mementos from our relationship. It’s black, small, frayed. A note might be in there. (Adnan Khan, “All I Can Tell You”)

The Unpublished City was conceived to show the (Multipli)City of writers that call Toronto home; that the City of Toronto might hear the wonderful voices of the Citys own true imaginaries. The idea here is to read ‘unpublished’ not simply as not in print, but as the narratives, and imaginations of the City that are present, and not yet fully realized, nor acknowledged. In these stories and poems we apprehend what lies on the surface of the City’s glass walls, in the depths of its rapidly and perennially urbanized landscape, and in its bristling and multilingual streets. 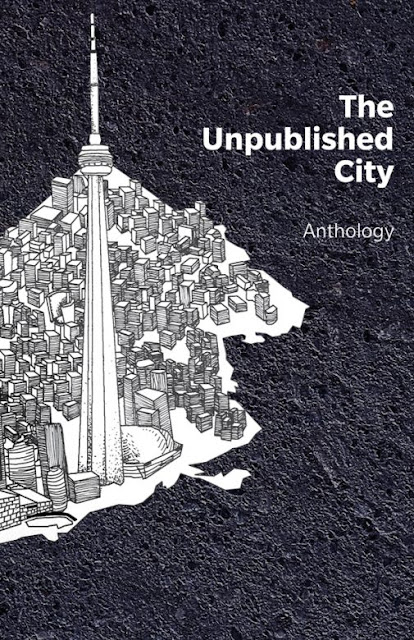 How different such a collection is than some of the Toronto-specific (or really, Canadian) anthologies of the past, whether Plush (Toronto ON: Coach House Press, 1995), the book that introduced myself and many others to the work of Lynn Crosbie and R.M. Vaughan (for example), or Blues & True Concussions: Six New Toronto Poets (Toronto ON: Anansi, 1997). The focus on diversity becomes an important part of the conversation of literature to engage in, no longer automatically pushing certain writers further into the margins. While I’m familiar with a couple of the names in The Unpublished City (Chuqiao and Dalton from their Ottawa days, for example, Doyali Islam is well known for numerous activities, including her recent appointment as poetry editor for Arc Poetry Magazine, and I recently reviewed Canisia’s latest small publication here), but most names are new to me, sitting just under the radar, it would seem, over there in Toronto. While my own sensibilities might have wished for more poetry than the collection holds (the bulk of the collection is made up of short fiction), one of the highlights had to be the work of Rudrapriya Rathore, such as her short story “Canaries,” that includes:

Grief is a heatstroke stumble through a coalmine. Find me with my parents, thirty years deep. History has gone slower here. The cheese comes in a tin. The bougainvilleas burn like fires. The glass of milk I am given grows a skin of fat.

Everyone calls my mother Baby. Later, I will watch Dirty Dancing and never not think of these things together. My mother’s mother sits on a straw mat in the middle of her home, which is crawling with relatives. A circle of women rock and pray and talk around her. Their heads are covered, eyes downturned, but the children have memorized the patterns on their saris, which is how they clamber into the correct lap. My grandmother, newly widowed, wears pure white. When she hugs me, I don’t recognize her earlobes. Stripped of jewelry, they’re fleshy and naked.

I would be curious to know the selection process for such a collection (Brand’s introduction is no longer than that paragraph quoted above), and where she discovered such a grouping of writers, or even the purpose/argument for the collection itself at this particular moment, but otherwise, the argument (as Brand writes it) is quite clear, quite strong, and quite remarkable: the wide variety of emerging voices that make up Toronto’s writing scene, one that can’t be reduced to a single sensibility, personality or perspective. And this is (beyond the introduction of a whole collection of emerging writers) a very good thing to be reminded of.

Where they buried the garrison in a gravel pit.
And we are all friends till the snacks run out. (David Bradford, “Why We Can’t Live Together”)