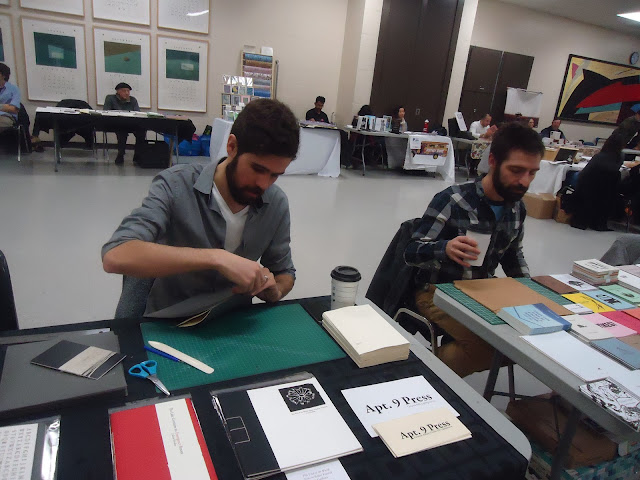 [poet and Apt. 9 Press publisher/editor Cameron Anstee, putting together further copies of Gil McElroy's latest; to the right, Michael e. Casteels at the Puddles of Sky Press table] Further to my previous set of notes (and, see, I’m writing about Toronto’s Indie Literary Market as well), here is another item I picked up at our most recent fair:

Ottawa/Colborne ON: I’ve been pleased to see Colborne, Ontario poet, curator and critic Gil McElroy [see my 2015 Jacket2 piece on him here] revisiting older works, such as the publication of his Sum: Word Maps (Ottawa ON: Apt. 9 Press, 2017), a slightly reworked version of a much older poem that blends the language grids of, say, Wilfred Watson, with the sensibilities of Steve McCaffery. I’d be curious to see where some of this revisiting/excavation might lead, and if it might mean a shift in his current work, as contemporary McElroy begins to collaborate with a previous version of his writing-self. Produced with the “Original Introduction” from 1983, McElroy’s grid-poem plays with numbers, fractions and patterns, writing: “Consider an arbitrary (and imaginary) structure composed of two parallel “lines” running horizontally, each “line” containing thirteen possible letters spaced at equidistant intervals [.]”The afterword, “After Words,” provides a bit more context to the piece (which would be difficult to easily replicate here):

As a working poet, though, most of my visual poetry dates back to the late 1970s/early 1980s. It was there that Word Maps took shape. I’d been casting around for a way of “disorganizing” words as semantically meaningful units, conversely seeking some organization scheme that would allow me to do something visual without devolving into what I thought of as the decorative or ornamental. While I wasn’t necessarily opposed to the aesthetic by any means (the words I chose to map, for instance, were most certainly the product of aesthetically based decision-making), so much visual poetry I had seen struck me as trite, especially by comparison with what visual artists – Lawrence Weiner, Gerald Ferguson, Jenny Holzer, even a piece by ‘earth’ artist Robert Smithson – were doing with language. It was far more sophisticated than an awful lot of visual poetry I had seen by poets.

But it was still held hostage to meaning, and I wanted to get outside of that. So, for good or ill, I thought that systemization would be just the trick, and I embraced one of Modernism’s great devices: the grid. I wanted to see words – the purely visual unit – differently, to strip away anything hinting of meaning, connotation, metaphor, what have you, and consider the pure artefact. Hence, Word Maps, visual units mapped onto an organizational grid that prevented meaning from adhering and so gave sight to something elemental, essential. In an introduction I wrote for the first appearance of Word Maps in Grain magazine (November 1983 issue, “Visual and Written Languages in Dialogue”) and for an exhibition at AKA Gallery n Saskatoon, I pompously referred to a mapped word as a “genotype,” borrowing from science, and the semantically meaningful ‘worldly’ unit as (logically) the “phenotype.”