now,
im gone
simple really
that really knocks me out

Calgary-based storyteller and academic Joshua Whitehead’s first trade collection of poems is Full-Metal Indigiqueer (Vancouver BC: Talonbooks, 2017), a spirited collection of text that “focuses on a hybridized Indigiqueer Trickster character named Zoa who brings together the organic (the protozoan) and the technologic (the binary) in order to re-beautify and re-member queer Indigeneity.” Exploring Indigenous representations and mis-representations through blending pop culture references up against those images, Whitehead’s Full-Metal Indigiqueer shifts and spins, smashing preconceptions from within and without his immediate vicinity. As part of a recent interview over at CBC Books, Whitehead responds:

I didn’t realize that the poems were all connected at first. I thought this was just going to be a collection of poems that I could call a book. But as I started working on these poems, I noticed a thread that was binding them all. It was all about disruption, ruptures, breakages and just straight up revisionism. I wanted to recentre Indigenous characters in canonical texts. I’ve always played with the idea of Indigeneity, whether outright or not. The way to do this is by bringing in the character of the Trickster — someone who can shapeshift, mould and form, and almost envelope, consume and redigest these types of stories. 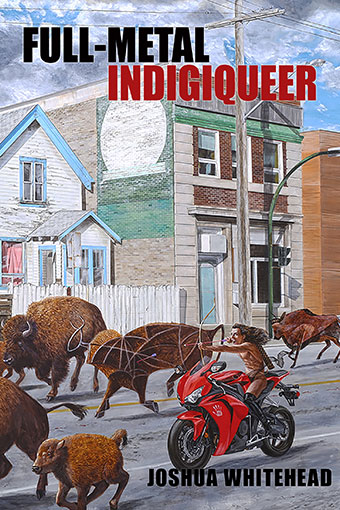 Fiercely intelligent, the poems in this collection move at a pretty high speed, playing with narrative, visual and concrete poetry structures and image, and includes a list of sources at the end some three pages long, from Seinfeld reruns to The Faerie Queene and A Christmas Carol, King Lear, Mean Girls, Richard Van Camp, Zora Neale Hurston, Leanne Simpson, Annie Proulx, Larissa Lai and Harry Potter. Even with all of the research and reference, there is a heavy performance and narrative aspect throughout, akin to the stripped-down narrative of Michael Turner’s original Hard Core Logo (a title originally produced as a poetry title, since republished as a novel), which makes one wonder if an adaptation for this work might also be possible?

i am the liberal project for a happy hour experiment;
i wonder if he feels like jake gyllenhaal in that bathroom
james franco[questionmark]
sean penn[questionmark]

when the waitress brings our feers
i down one, sip the other
think about what jack twist means in a town like this
& channel my inner ennis:
“i wish ii knew how to quit you –
i do
i do” (“ITS THESE LITTLE THINGS, YOU KNOW[QUESTIONMARK]”)

After hearing him perform recent as part of the Arc Poetry Magazine “Oh Canada, We Have Issues” launch at the Ottawa International Writers Festival, it became unmistakable that his work has a considerable weight, utilizing some significant word-play and a wide array of cultural knowledge to craft a body of poem-essays on identity, exploring what Indigeneity and queer-ness means, both individually and together. This is an impressive work, and a writer very much worth paying attention to.

Posted by rob mclennan at 8:31 AM
Labels: Joshua Whitehead, Talonbooks