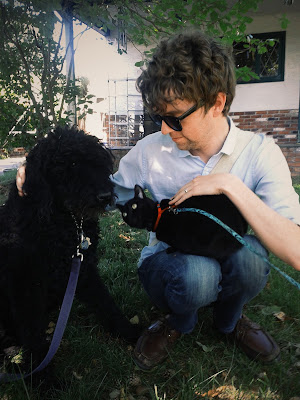 Sam Shelstad lives in Toronto, Ontario. His first book of short stories, Cop House, was released by Nightwood Editions this October. His stories have appeared in The New Quarterly, Joyland, Prism International, Carousel, The Puritan, Grain, The Fiddlehead, The Feathertale Review, The Dalhousie Review, and The Rusty Toque. He contributes to McSweeney’s Internet Tendency.

1 - How did your first book or chapbook change your life? How does your most recent work compare to your previous? How does it feel different?
My first book came out one week ago, so not much has changed yet. No one has recognized me on the subway. No has tried to “Misery” me.

2 - How did you come to fiction first, as opposed to, say, poetry or non-fiction?
I started writing fiction because that’s mostly what I read. When I walk into a bookstore, I head directly to the fiction section and spent most of my time there. I actually did write a series of poems in high school and they were terrible. So, so terrible. They were supposed to be funny and they were absolutely not. I wrote them on my computer and then that computer stopped working. I’m so glad those “funny poems” are dead and gone. Oh God.

3 - How long does it take to start any particular writing project? Does your writing initially come quickly, or is it a slow process? Do first drafts appear looking close to their final shape, or does your work come out of copious notes?
It varies. Every time I write something I want it to be easy and quick. I want to discover a perfect story formula so that once I have an idea I can just sit down and complete the formula, then move on to the next idea. It never works like that though—I always have to figure out how to write a story all over again, as if each one I write is my first. I think it gets harder to write stories, the longer I’ve been writing them. So sometimes it takes forever, sometimes it’s quick. Sometimes I meticulously plan everything out before I write and sometimes I dive right in. Some stories take months and months of editing and some come out exactly how I want them in one sitting. I don’t know what I’m doing.

4 - Where does a work of fiction usually begin for you? Are you an author of short pieces that end up combining into a larger project, or are you working on a "book" from the very beginning?
I always start with a rough, vague idea and I’m not sure at first what it will be. It will be a word or sentence or concept, something small, and I usually write it in my phone or notebook. I think about it until eventually a story starts to shape itself around the idea, and I can usually tell early on whether it’s a short story or something larger, like a novel. For example, I have a note in my phone that just says “mannequin fingers”. That probably won’t amount to anything. What am I supposed to do with “mannequin fingers”? But the phrase popped into my head and seemed significant enough for me to write it down, so who knows. Look out for Mannequin Fingers next spring!

5 - Are public readings part of or counter to your creative process? Are you the sort of writer who enjoys doing readings?
They can definitely be part of the process. I’ve found that I’m much more ruthless an editor of my work if I’m getting ready to read in front of an audience than if I’m preparing to submit a story to a magazine. Not sure why. Also, reading your work out loud while you prepare for a public reading gives you a better sense of the rhythm of the writing, which is definitely helpful. I do enjoy reading in public. I like talking into microphones.

6 - Do you have any theoretical concerns behind your writing? What kinds of questions are you trying to answer with your work? What do you even think the current questions are?
No real theoretical concerns. I just write stories, try to make them interesting, and then meaning sort of forms itself in the background. I’m not really conscious of the questions my writing is asking or answering until I’ve finished a draft. I’ve tried writing stories with a theoretical objective from the outset and these have always fallen flat.

7 – What do you see the current role of the writer being in larger culture? Does s/he even have one? What do you think the role of the writer should be?
I like what Barack Obama said about how reading novels helps you empathize with people that are different from you. Fiction allows you to slow down and really think about other perspectives as you move through various crises with the characters you’re reading about in a book.

8 - Do you find the process of working with an outside editor difficult or essential (or both)?
Whenever I get notes back from an editor, I always look at their comments quickly and then walk away for a few days.  My ego gets insulted that the editor has the gall to criticize my amazing story. They don’t understand my genius! When I go back to the editor’s notes later, my ego has calmed down and I realize they’re right about everything and that they actually understand my story better than I do. My writing would be much, much worse without the editors I’ve worked with stepping in and reigning in my bad habits.

9 - What is the best piece of advice you've heard (not necessarily given to you directly)?
I started a new job in high school and one day I came home from work upset. I hated everything about it and wanted to quit. My dad told me to give it two weeks, because it takes two weeks to get used to a new thing. So I waited two weeks, got used to the job, and ended up loving it. Now I always give new things two weeks.

10 - How easy has it been for you to move between genres (short stories to the novel)? What do you see as the appeal?
The hardest part of writing a novel is that it takes so long, which means there’s this incredible pressure to make it great. While working on a novel, I constantly second-guess myself and wonder if I should scrap everything and start over with a better idea. With a short story, you’re free to write a bad story because it’s not as big a deal to waste a week or two writing something awful. But to spend a few years crafting a bad novel seems depressing. The only way around this is to learn to ignore the enormous pressure and just write the thing. Hopefully it turns out okay, but there’s no way to guarantee that it will be. Anyway, you’ll learn something from it and so what if you wasted all that time on a bad book? What else were you going to do? You would’ve wasted that time some other way, trust me.

11 - What kind of writing routine do you tend to keep, or do you even have one? How does a typical day (for you) begin?
Ideally, I write in the morning as soon as I get up. I try and write for two-to-three hours. If I have the afternoon free as well, I might go for another couple of hours. I write at the kitchen table, and occasionally at the library down the street. I listen to music (on headphones at the library) and take breaks to pace around the room. At night I sometimes look over what I’ve been working on and make notes.

12 - When your writing gets stalled, where do you turn or return for (for lack of a better word) inspiration?
If I lose energy or inspiration and can’t seem to write anything, I step back for a while and focus on other things. It’s happened a few times and I’ve found it’s impossible to force productivity when I’m in that state. I try and be patient. I kick a piece of garbage around the neighborhood until my creative powers return.

13 - What fragrance reminds you of home?
Cat litter.

14 - David W. McFadden once said that books come from books, but are there any other forms that influence your work, whether nature, music, science or visual art?
Definitely. The mood captured by a painting can inform the tone of a story I’m working on, or I might try to capture the energy of a song with a scene. One of the stories in my book is about a lonely man who starts a letter writing campaign to keep the show Friends on the air, because I was watching the show Friends at the time and needed a place to direct all of that “Friends energy” I was soaking up.

15 - What other writers or writings are important for your work, or simply your life outside of your work?
There are so many important writers and writings in my life, but off the top of my head: Flannery O’Connor, Kurt Vonnegut, John Fante, Lydia Davis, Don Delillo, Ottessa Moshfegh, Roberto Bolano…

16 - What would you like to do that you haven't yet done?
Get my driver’s license.

17 - If you could pick any other occupation to attempt, what would it be? Or, alternately, what do you think you would have ended up doing had you not been a writer?
When I was a kid I was obsessed with private detectives. My friend Jeremy and I had a detective agency and we’d meet in a treehouse that stood in the yard of an unoccupied home. We put up a flyer in the local convenience store. That obsession is quieter now, but it’s still there. So I think I’d like to be a private detective, but somewhere quiet and pleasant where the cases would be non-violent and charming.

18 - What made you write, as opposed to doing something else?
Writing is unique in that you don’t need a lot of equipment or tools to get the job done. The act is beautifully simple. You can write a novel with a pencil and paper. And you’re in control of everything—you don’t need to find a decent bass player or hire a lighting assistant. I like having total freedom to make whatever I want with words.

20 - What are you currently working on?
A novel set in Niagara Falls, Ontario.