on past graves
holding settlers

until the pines
seemed to charm

me out of myself

of Plato’s vision
the human not

a heavenly plant
the soul housed

in the head (“Convince me you have a seed there”)

The sixth full-length poetry title from Philadelphia poet, editor and publisher Brian Teare is the expansive and ambitious Doomstead Days (New York NY: Nightboat Books, 2019), following his earlier poetry titles The Room Where I Was Born (University of Wisconsin Press, 2003), Sight Map (University of California Press, 2009), Pleasure (Ahsahta Press, 2010), Companion Grasses (Richmond CA: Omnidawn, 2013) [see my review of such here] and The Empty Form Goes All the Way to Heaven (Boise ID: Ahsahta Press, 2015) [see my review of such here]. Doomstead Days is constructed in eight extended poem-sections—“Clear Water Renga,” “Headlands Quadrats,” “Toxics Release Inventory,” “Sitting River Meditation,” “Convince me you have a seed there,” “Olivine, Quartz, Granite, Carnelian,” “Sitting Isohydric Mediation” and “Doomstead Days”—the second of which appeared last year as a self-contained chapbook through Brooklyn publisher DoubleCross Press [see my review of such here]. As I wrote at the time, Headlands Quadrats is “a small chapbook of short lyrics furthering his own engagement with eco-poetics, and produced ‘In Memoriam’ for the late San Francisco poet Joanne Kyger (1934-2017).” The afterword to the chapbook, which doesn’t appear in this trade collection, writes:

The quadrat is a unit of measurement used in ecological studies of botanical species. It is a square (made of a durable material) placed over a site to aid in the controlled collection of data. Within the square, species are counted, rain is measured, temperatures are taken, and variations are often tracked over weeks, months, and years. Its inventor, the botanical ecologist Frederic Clements, first advocated for its usage in his 1905 textbook, Research Methods in Ecology, describing it as “merely a square area of varying accurate information.” But as the critic Joshua Schuster notes in his 2015 study The Ecology of Modernism, the quadrat eradicated the values with which Romanticism had laden nature. With the quadrat, “anything could be ecological, and ecological change was an open-ended process without a script that favored morally freighted outcomes.” 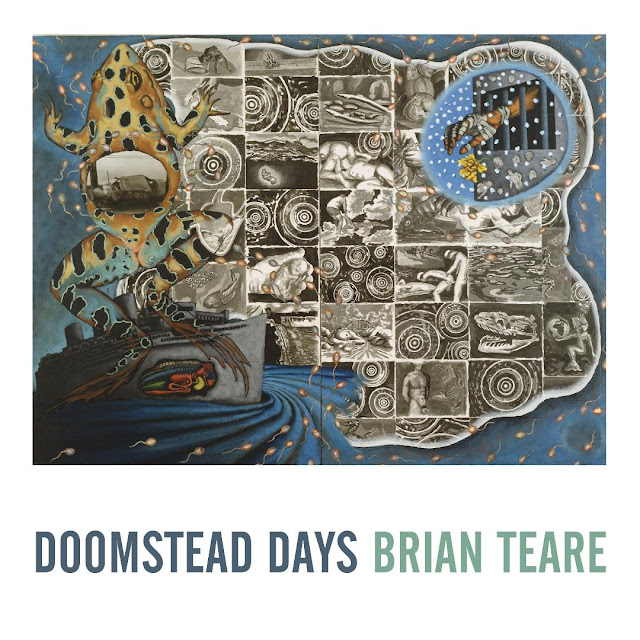 Doomstead Days is a book very much engaged in the large canvas, experimenting with short lines and short sections across expansive sequences, collected here as a sequence of poem-sections. Teare’s experiments in rhythm and meaning coincide with how the poems flow across the page, whether poems constructed using left-margined short, accumulating lines, a sequence of two or three line stanzas that flow back and forth across the page, or a sequence of three couplet stanza-squares, one to a page. “[S]ometime the image,” he writes, in the poem “Toxics Release Inventory,” a poem subtitled “(Essay on Man)”: “seems like the first frames of film / before the horror [.]”

One of the more active and engaged eco-poets in the United States that I’m aware of [he had an article on such recently posted via Harriet, the blog], Teare’s Doomstead Days is concerned with precisely what the author—and a number of his books—have been concerned with for some time: the ongoing planet-wide ecological disaster, entirely caused by human activity. Given his prior collection, The Empty Form Goes All the Way to Heaven, explored both the onset of a chronic illness into the work of abstract expressionist painter Agnes Martin (1912-2004), Doomstead Days would seem an extension of his explorations in the book prior to that, his Companion Grasses. As he writes near the opening of “Clear Water Renga”: “I watched white boats go // trailing bright yellow booms, saw / how the real absorbs a fact [.]” Doomstead Days records loss, articulates shifts in ecology and meditates on potential human responses, lack of response and what the shift means, both as loss itself and the encroaching possible termination of human life as we know it. His is a lyric propelled by research, experience and thinking, one line accumulating up against the next. There is something in Teare’s work, also, reminiscent of the work of Vancouver poet Stephen Collis—writing extended, meditative lyrics of accumulated short lines on and around the effects of the Anthropocene—blended with the poem-essay of poets such as Erín Moure, Elisa Gabbert or Phil Hall, utilizing the poem as their best “thinking form.”

made with water’s power

south to the city port

from under hemlocks (“Doomstead Days”)