I’VE MADE A TERRIBLE MISTAKE

I’m not like all those
other women. I will not
rise above myself.

Vancouver poet Adrienne Gruber’s third trade poetry title is Q & A (Toronto ON: Book*hug, 2019), “a poetic memoir detailing a first pregnancy, birth and early postpartum period.” Following on the heels of This is the Nightmare (Saskatoon SK: Thistledown Books, 2008) and Buoyancy Control (BookThug, 2016), the lyric narratives of Q & A explore territory so often set aside, unwritten and unspoken, on the fear, elation and uncertainty that comes with pregnancy and childbirth. “I writhe on my back with my eyes closed.” she writes, in “GESTATIONAL FALL”: “I see only blood. / Yours and mine.” Or there is the quintuplet sequence “WHAT TO EXPECT WHEN YOU’RE / EXPECTING (100 YEARS AGO),” the fourth of which, “Sex,” that reads:

Indulgence results in the transmission of libidinous
tendencies to the child.

It is a well-established fact that the propensity
to abortion is induced by sexual appetite.

The practice of continence during pregnancy
is enforced in the harems of the East.

Abortion is practiced among women who desire
to remain special favourites of the common husband.

Continence during gestation ensures the pains
of childbirth are greatly mitigated.

A woman’s sexual nature should find expression in motherhood,
not the grosser forms of sexual activity.

The females of most animals resist advance of the males
during this period. They are less perverted than humans.

Gruber explores some interesting elements relating to discussions around what the body is doing and should be doing during pregnancy and childbirth, both currently and historically, some of which was misinformation caught up in years’ worth of poorly conceived ideas informed more by misogyny and error than actual research (including some misconceptions still held and repeated). Her poems seek agency, citing historic examples of medicine failing women about to give birth, and the loss of her own feeling of control during her own experiences. There is something curious, as well, in the way Gruber writes about and around pregnancy and childbirth: writing poems from her own experiences alongside poems that explore historical circumstance, constructing a collection, in part, around research around her particular subject. The construct is comparable to some of the recent work of Toronto writer Kate Sutherland (another writer who began with Thistledown before moving to Book*hug), who researched rhinoceroses for the poems in her How to Draw a Rhinoceros (Toronto ON: BookThug, 2016)[see my review of such here]. The poem “SUPPLY AND DEMAND” ends:

Postpartum is the sewage system of a shrunken world.
You splay my chest. Starfish. Milk wastes under your weight.
My stomach is a flaccid blueprint of your past life.
Vacancy sings. It was a good harvest.
You pat my belly, the old stomping grounds. 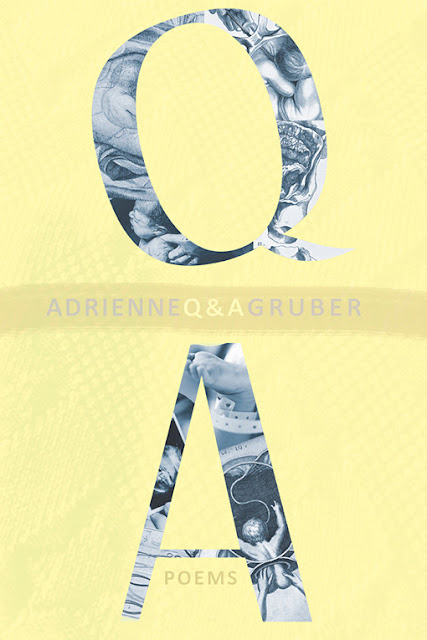 In her “12 or 20 questions” interview, posted September 1, 2016, Gruber speaks of both the publication of her second collection and the composition of her as-yet-unpublished third, the manuscript that evolved into the published Q & A, writing that “When I began to work on poetry again, it turned out that first year of parenting was a much-needed reprieve and I suddenly had loads to say. I wrote the entire first draft of my third manuscript when my daughter was two-years-old, much of it during her (wonderfully predictable) afternoon naptime. I credit her for forcing me into a new phase of discipline, where I no longer mess around on social media or clean the house when I have an hour of time; I get shit done. My youngest is eleven months and I’m back in that anxious phase of feeling like I have little time and energy to work and it’s driving me a bit mad. I keep reminding myself that this is all par for the course when you have a baby under one.” Further in the same interview, she writes that:

My current questions are;

Why did birth move into the hospital?
What happens when we try to intervene in and control the physiological process of birth?
Why are we always trying to control women’s bodies?
Who is making dinner tonight?
Why does my youngest keep pulling on her ears?
Will my house ever stop being sticky?

The poems in Q & A exist precisely within that intimate space, intricately observed, questioned and explored; hers is an intimate and domestic territory Margaret Christakos might have pulled apart with language, but Gruber pulls apart through a different lens, articulating short narratives that focus on moments both large and small through an urgency, anxiety and the discovery that letting go is as important as holding close, as the poem “FINALE” ends: “21 hours / and you didn’t / come easy / but who does?” Her book writes of love and loss, discovery and utter fear, and an absolute joy mixed with exhaustion. As the final poem, “ANSWERS,” teases the reader with what ends up becoming her greatest discovery, writing:

Some call out God
during sex
or birth or even
in death but I said
Love. Love
with every force
of my being.

Posted by rob mclennan at 8:31 AM
Labels: Adrienne Gruber, BookThug