Actresses in their dressing rooms,
ambassadors. Undoing distinctions
between body and environment.
A woman standing in the bath.
A woman drying her feet. reading
after the bath. A lion in the pan.
Not giving a damn about your
demons. Or loving them. Naming
them. Try it with your mouth,
to make a better sound and another
better sound. You start doing it to
stop feeling so much and you keep
doing it to keep feeling so much. 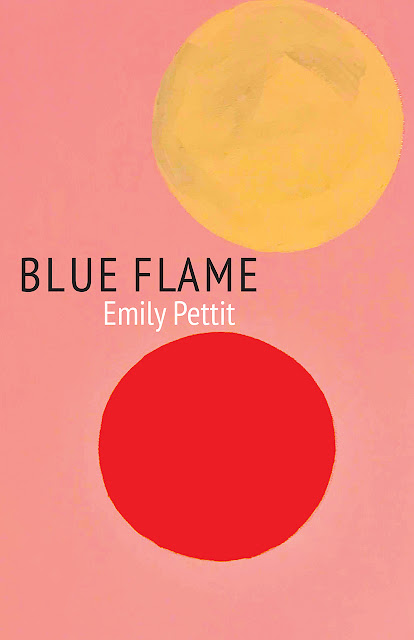 Given how much I enjoyed American poet Emily Pettit’s debut, Goat in the Snow (Birds, LLC, 2012) [see my review of such here], I was pleased to hear of her second collection, Blue Flame (Pittsburgh PA: Carnegie Mellon University Press, 2019). A few years ago, I compiled an informal list of contemporary American poets I’d noticed who were composing tight, observational lyrics, many of which were composed as mid-length lines in poems often less than a page long, and often set as a single-stanza block down the page; poets such as Emily Pettit, Bianca Stone, Hailey Higdon, Emily Kendal Frey, Sommer Browning, Anne Cecelia Holmes, Matthea Harvey, Natalie Lyalin, Dorothea Lasky, Amy Lawless, Anne Boyer and the late Hillary Gravendyk. My list is, as most are, rather arbitrary, even as one can see each of them composing first-person narrative lyrics on attempting to navigate the world, some of whom use humour, but all of whom who utilize subversion, distraction, discomfort, comfort and use of the straight phrase, and a blending of lightness against dark. “I tried to tap into the old bitterness / to see if it could teach me anything / about the new bitterness,” Pettit writes, in the poem “AFTER VISION,” “but it was / a wall. A wall is not worth looking at.”

The poems that sit in the first two of Blue Flame’s three numbered sections are composed as single stanzas, composed of mid-length lines and line breaks hard and soft and sometimes jagged, writing elusive and allusive to a point that might sit at the end, sit mid-point, or even beyond the horizon; writing towards an idea, like a thesis. There is a clarity to her thinking that moves across and into unexpected places, but moves in such a way that one immediately trusts the author, even if you, as a reader, might have no idea where you are headed. Her journeys contain wisdoms, uncertainties, anxieties and wrong turns even as lessons are learned. Her poems are sharp, confident and quick, even as she’s reaching through uncertainty, anxiety or restlessness. As she writes in the poem “ALL OF THE ANIMALS WERE THERE”: “I keep my fire in the fire. Except / when I don’t. You learn a pattern. / You learn another pattern. We’re talking / imaginary practice. We’re talking / secret parades.”

AN AGREEMENT REQUIRES
AN OFFER AND ACCEPTANCE

I came here to get you excited.
We have an accidental stare down.
No bees, no money. No one says this.
I am so frightening. No one is impressed.
It’s all, a duck’s quack doesn’t echo
and no one knows why. You think
you are whispering when you are not.
We are experts at distributing distorted
information. This is how it might feel,
take hold of something between
your finger and your thumb and twist it
sharply. Make a slight adjustment.
A logical consequence appears
to arrive, a bar, a partition, a stick.
I am hitting rocks with a stick.
What do you believe to be important
points of convergence? Vegetables.
Electricity. The extremely challenging
sky. To show adoration with the eyes.
To say something necessary. I avoid
my eyes. I think I mean it.

The third section is structured as an entirely different entity: a tonal shift as well as her shift from poems set as a single-stanza into a longer sequence of fragments, shifting and stretching her thesis into one more abstract, built out of furthered and accumulated moments.

Look at how you are moving your legs.
And look

Composed entirely of a single poem, “HANDS LIKE LIGHTERS,” the sequence appears as a more lyric lyric than the poems throughout the rest of the collection, employing shorter lines and space, a different kind of breath, and a different kind intimacy, both through smallness and the narrator discussing the possibility of becoming truly vulnerable for the sake of an open heart. There is an openness to this poem that is quite lovely, one that ruminates across a new distance; her poems already contained multitudes, and this piece presents an entirely new flavour, one of breath, space and possibility, writing:

I love words.
I thought I hated bodies.

I didn’t know I could love
a body.

I didn’t know I could let
somebody love my body.