What the Poets are Doing: Canadian Poets in Conversation, edited by Rob Taylor


Thammavongsa: Describe an image of a place you’ve travelled, and why it’s important to you to have been there.

Brand: The Atacama Desert. It was the quiet of it as soon as I arrived. This quiet settled everything I had been experiencing before; it quelled several years of disturbance.

Thammavongsa: Deserts are examples of maximalism. The quiet can be so large, so weighted, it is louder than any disturbance. I say this because it’s how I like to think of my writing. The quiet, the silence, the nothing there is maximized. I make things bare and I amplify that.

Brand: It’s wonderful that you say deserts are examples of maximalism. I had strangely thought minimalism! I wanted to go someplace empty of noise. You are right, the silence crowded out the disturbance.
You’ve been to a desert; what was it like for you?

Thammavongsa: Yes. In Marfa, Texas. The land was so flat. All I noticed was sky. It made me feel seasick. It was too much. And I loved the tumbleweeds. I was so happy to see them. I know that tumbleweeds began somewhere and they take the shape they have because nothing stood in the way of their tumbling-toward.

I’m impressed with the interviews (more specifically: the conversations) in the collection What the Poets are Doing: Canadian Poets in Conversation, edited by Vancouver poet and critic Rob Taylor (Gibsons BC: Nightwood Editions, 2018). This book is self-described as a response and follow-up to another Nightwood title, Where the Words Come From (2002), edited by Tim Bowling, as Taylor explains in his introduction:

The structure of this book mirrors the last, with a few key adjustments. We’ve added poems to the book—poems which, for the most part, are mentioned in the conversations themselves—in hopes they will deepen the reader’s experience. We’ve also set out to have these be true conversations as opposed to interviews, with both poets posing questions to one another and contributing equally. Tied to that, while the book does adhere to the structure of pairing established and up-and-coming poets, the qualifications for who fits in which category were amorphous and largely ignored while finalizing a pairing. There are poets in the up-and-coming slots who have published as many books, or are nearly as old, as some of the “established” poets. Oh rule sticklers, it’s a mess! Fortunately, you’re entering a party and not a coronation. 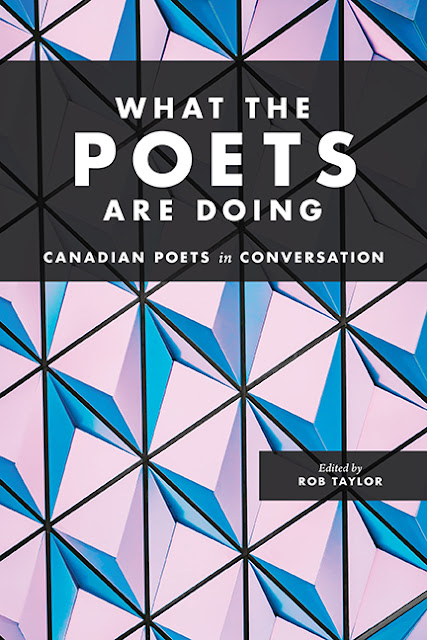 What the Poets are Doing: Canadian Poets in Conversation includes ten conversations between an intriguing array of paired currently-active Canadian poets—Steven Heighton and Ben Ladouceur, Armand Garnet Ruffo and Liz Howard, Sina Queyras and Canisia Lubrin, Dionne Brand and Souvankham Thammavongsa, Marilyn Dumont and Katherena Vermette, Sue Goyette and Linda Besner, Karen Solie and Amanda Jernigan, Russell Thornton and Phoebe Wang, Tim Bowling and Raoul Fernandes, and Elizabeth Bachinsky and Kayla Czaga, as well as an afterward co-written by Nick Thran and Sue Sinclair—running quite the range of engaged contemporary writers from emerging to established, and lyric to the more experimental. The highlights abound, but some of what struck included an utterly charming and illuminating sequence of seeming non-sequiturs between Dionne Brand and Souvankham, the conversational topography between Steven Heighton and Ben Ladouceur, and a fascinating conversation between Armand Garnet Ruffo and Liz Howard, two poets of similar heritage; born a generation apart, they were both raised in the village of Chapleau in Northern Ontario. As their conversation includes:

Howard: I think you’re exactly right that there is this all-too-steady gaze on the traumatic Indigenous experience. I also often wonder about what might be called Indigenous “futurisms,” or futures or possibilities, aesthetic potentials as you have said. I think I have made a way toward that in my work. At least that was the intention, the necessity. The fracturing, the hardship, the wound, whether within oneself and/or within one’s lineage as an Indigenous person is a fact. The question is what to do? Ultimately for myself as a writer, I discovered the figure of the infinite citizen of the shaking tent. Perhaps I am a kind of slippery, in-between, trickster spirit. I suppose this is the figure of myself as a writer that could compose in so many formally inventive and generative ways, pulling in neuroscience, the bush, Western philosophy, Nanabozho, dreams, calling down the sky, Toronto streets, ecological concerns and so on, and compressing them all together into my account, my gift, my book. The trauma, the silence, the absence is there too. But I think it is an ultimately joyful text. I see your work on Norval as being along the same lines. You don’t leave him with us as either a tragic or revelatory figure. He’s deeply human. I see the possibilities for Indigenous work as being an open and variegated as each of our stories.

Honestly, while going through this collection, I’m a bit surprised that there hasn’t been more talk around just how strong this assemblage of conversations actually is. This is, I would say, one of the examples of the follow-up surpassing the original, moving beyond the limitations of a particular aesthetic into a possibility of subject matter, one that is incredibly far-ranging and timely. Part of what this curated list of poets allows for is also the possibility for multiple conversations around race, representation and how a variety of violences have impacted individuals and communities, as well as writing, and how writing has been forced to adapt in response. Over the past decade or so, conversations around diversity, colonialism, #MeToo, #IdleNoMore and other topics that had long been bubbling under the surface have risen to the mainstream, and a series of shifts in publishing and possibility have allowed the same to emerge in writing as well, and this book does well to allow for those conversations, some of which might be seen as long overdue.