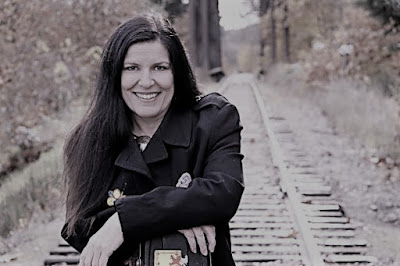 Karen Lee White is Northern Salish, Tuscarora, Chippewa and Scots from Vancouver Island, British Columbia. Adopted into the Daklaweidi Wolf Clan of the Interior Tlingit/Tagish people on whose land her first novel The Silence (2018 Exile Editions) unfolds, in 2018, she was commissioned by the Banff for Fables for the 21st Century. In 2017 Karen was awarded an Indigenous Art Award for Writing by the Hnatyshyn Foundation. Her work has appeared in Exile Editions That Damned Beaver anthology, EXILE/EQ Magazine, Impact: Colonialism in Canada, and other literary journals. A playwright, she has been commissioned by theatres in Vancouver and Victoria.

My first book, The Silence which was released by Exile Editions in December 2018, has finally allowed me to feel like a Writer and fulfilled a childhood dream. It has shown me how much Indigenous and mainstream community support I have in my life.

My most recent work flows out like water. It feels free and natural to me. Previous, I always felt that I was struggling with words. As though English was a second language. Writing sometimes felt free but mostly was a struggle. Now it flows like a river.

I started early with poetry, and could never get it right so became a singer-songwriter, using my voice to articulate what I could not. I fell in love with short stories early on. I took Playwriting to hone dialog and fell in love with it.  I have written non-fiction, and I finally gave birth to a novel.

Sometimes I note down an idea and it takes years to go back to it. Sometimes and entrie story busts out onto the page and needs little change. Final drafts are a house that is honed down to a magic cottage.

I seem to know what form it is before I begin. A poem begins as a poem, a short story as a short story, and a novel as a novel. So they are what they are from the beginning.

Public readings are exciting and challenging. Reading aloud is a powerful tool in writing. Reading aloud to an audience amplifies the power of the tool. Readings allow me to hear the writing as if through the ears of the listeners. Without bias, without feeling it is mine. I feel it in a fresh way. It doesn't feel like it belongs to me. So while readings are not a natural thing for writers (writing is a solitary sport) they provide instant gratification and feedback.

I try to be like an Elder and share with love. I am aiming at Reconciliation in my work between Indigenous People and European-Canadians. There is a great divide and I feel as a person who is from both of those peoples that I should bridge and ceate understanding. The current questions are about everyone questioning everything, and about connecting to the unseen world for relief from this one.

All artists exist and suffer to create beauty in the world. We need so much beauty to counter what is not. Each Writer is solitary and writes for whatever reason they do. For me it is about creating beauty, exposing truths, providing wisdom for life the way a kind and compassionate Grandmother does. Lee Maracle once told me that I had a duty to publish because per capita, per Indigenous child, there were so few Indigenous Writers in Canada. It gave me a conscience, and I had to seek my courage and go forward, risk everything, and shoot my work like an arrow out into the unknown.

8 - Do you find the process of working with an outside editor difficult or essential (or both)?
It's a dichotomy. Outside editors force you to be widely understood; question. Make you fight for what you believe in. An outside editor is absolutely essential, because as a Writer I am far too close to the work to be unbiased and to kill off characters. As an Indigenous Writer, some Editors are excruciating to work with because they lack cultural competency (not their fault, it's just a lack of opportunity to know and understand our world view). One editor slashed and burned and left the soul of my work exposed, and for that I am deeply grateful. Another triggered me constantly by asking for correct spelling of words in Indigenous language (there is no such thing as our written languages were not English). She also argued the spelling of translated words in English, saying that the Oxford dictionary spelled it this way and not the way I spelled it, and I would have to defend my spelling as a direct translation from a language and that it was correct my way and used widely in my community my way. They would brin up political correctness, 'should I be using Indian when Indigenous is the used term'? I would respond that we get to call ourselves whatever we want, that Wagamese always used 'Indian' and it's like our reclaiming the way it has been used as a racial slur. I would have to say that it was not a requirement for me as an Indian to be politically correct. Once I found that an editor had put an 's' on the end of a Tlingit word, thinking that it would pluralize it. It was quite maddening. I sent her a scan of the cover of the Indigenous Style Guide.

From Roger White, a beloved Canadian poet and artist 'when you create, put the ogre or critic to sleep. Let the elf, the creative spirit out. Wake up the ogre ONLY when you need critique. Never let the ogre be awake and present when the elf is at joyful work.

10 - How easy has it been for you to move between genres (poetry to plays to short stories to novels)? What do you see as the appeal?

It's easy once I adjust to the formats. The appeal is that playwriting hones dialogue for other genres, poetry creates economy of writing (you lose extra and uneeded words). Short stories describe one scene,and one must be succinct and clever to effectively lure the reader to take a quick trip.  Novels are a journey that combines all the others, and requires skill to continually engage the reader so they read to the last page.

I have a large body of unpublished work because I get up, make coffee, feed the cats and sit down and write for as long as I can before life encroaches. Weekends I write as long as I want to. My first novel I wrote in six weeks, also writing scenes during lunch hours and on breaks from work. In this way I have written 5 plays, 6 novels, two collections of short stories, and 2 volumes of poetry. Sometimes I take months off, like at the moment, I am learning the business side of writing. Promoting my new novel. I have the second with a content editor for an opinion. So I take time to 'think' and don't consider off-times to be times of 'writers' block', but simply a period of gestation, thinking and recharging.

I don't. I let myself be until I feel like I want to go back at it. If I need to jumpstart, however, I go back to the 'morning pages' from The Artist's Way and I just write drivel until a story begins to tell itself to me. It's a magic moment.

Definitely my connection to spirit. I write in my sleep. I never get up to write it down. I stare at trees for hours. Have conversations with them. I watch the inlet outside my house. I stared at that water for months once and wrote my favorite piece, about water and how Salish people are connected to it in all its forms.

Sometimes its a facebook post or letter I have written. The loss of a loved one. A dream. My wild imagination. Watching someone I know walking from a distance in Victoria in a long black coat and fedora spawned an entire 5 act play. He told me later he had been kicked out of Residential School. That is one whole scene. Sometimes it's a conversation. A joke. A look. An energy. A near death experience.

Other Indigenous writers, people I have met who are writers, my mentor, Linda Rogers whose writing is absolutely of deep spirit. The writing of little ones, all writing that has integrity and takes risks, writing so beautiful that it evokes fragrances and lulls the spirit. Writing that is absolutely rife with compassion.

Swim with dolphins and killer whales, retrace the footsteps of some of my ancestors, find my Indigenous home villages, learn Tuscarora, Northern Salishan, and Chippewa. Relearn Shona (Zimbabwe). Paint a painting that I love. Get my silversmithing studio set up and work with silver and stones again.

I would have been a teacher. I still can. I can teach writing.

I have no idea. This was an early dream as a child. I read thousands of books and listened to thousands of songs. I fulfilled the dream of having a book and album published.

Christopher Robin. Impacted me for days.

No idea, formulating. Watching. Listening, smelling, feeling, sensing and tasting. No doubt this will become something. I am a little worried about not being able to write something new after the recent publishing of my first novel, but that's idiotic because I wrote a poem this a.m. as a gift for a friend who struggles with being empathic. It may have only been for her, but that's still writing. As is the watching and being.