Rita Wong and Fred Wah, beholden: a poem as long as the river


FRED WAH – Where did the words come from for what we were doing with the Columbia River?

RITA WONG – Maybe the River gifted us those words. […] (“Afterwords, a Dialogue”) 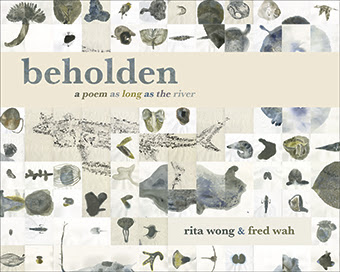 Furthering the idea of the bio-text into, as the back cover suggests, “the biospheric, the biotextual,” is the book version of Vancouver poets Rita Wong and Fred Wah’s collaborative art-text, beholden: a poem as long as the river (Vancouver BC: Talonbooks, 2018). beholden: a poem as long as the river is a project that “arises out of a larger project titled River Relations: A Beholder’s Share of the Columbia River, a collaboration of artists seeking a creative engagement with the Columbia River. […] The poem, represented along a 114-foot banner of the entire Columbia River, has been exhibited as part of a number of gallery presentations displayed in the Pacific Northwest.” As the back cover informs: “We have not lived up to our responsibilities to the river, and we need to do better. The river does not end at its banks, but flows through our sinks and showers, charges our cellphones, and stirs our thoughts about treaties.”

Existing as both poetry title and exhibition catalogue, beholden: a poem as long as the river displays the entirety of the 114-foot banner in book form: two lines of text rolling, looping and crossing a full colour illustration of the Columbia River. Set as twin lyrics in conversation across the bank from the other, in a way that suggests Wah as author of one, and Wong as author of the other (although this remains conjecture): “[…] hello David Thompson now this quiet water maps diesel along the marshes of locomotion crossing North down the map of the River of Heaven Steamboat Mountain are you worried about a future – […]” (pp 5-6). The book also includes a more direct conversation between the two authors on their project, in which they discuss the movement of how their project emerged. As they write:

FRED – I found in approaching our project, after we had decided to do this poem as long as the river, that I had to first shed my preconceptions, not about the river, but about what I could bring to the river. One of the greatest experiences of making this composition was finding out that I had to listen to the river to hear what resonations were available. You’re right. Language was something that bounced back from the river. I know you’ve done a lot of writing on water, and thinking with water generally, not just the river. You came to this project with a sense of water.

The book-length singular threads are reminiscent, slightly, of Darren Wershler’s The Tapeworm Foundry (Toronto ON: Anansi, 2000), a poem composed as a singular, book-length line that sat as page upon page of text blocks. In contrast, beholden is very much a pair of singular threads—that look like individual threads across the page—in dialogue, occasionally meeting to overlap, but moving at the same speed in a similar direction, along that same river, working through whatever differences, distances and divergences they might hold. Sitting as threads handwritten and typeset, the poem rolls and eddys the length of the river, writing out an argument for the waterway, ecological preservation, aboriginal land rights and simply the possibility of a continued ecological existence upon the earth. As one of their threads reads:

[…] the trees need the river and the river needs the trees and we need both river and trees in ways that are buried in bone and sinew, uncanny returns, shifting baseline syndrome no excuse for not learning the cultures of this land, better late than never to not take abundance generosity or humility for granted on this spinning earth, keep the language and the story honest, don’t call a reservoir a late… don’t naturalize the hubris, don’t hide the arrogance of destroying what you don’t understand. listen for what’s underneath the narrative of convenience, the inadequacy of speed and progress, or its deadly outcome, from the perspective of trees & herons & wolves, who remembers the before, the during and the after as we wait for the leap to take hold or for the machinery of greed to dig a mass grave for those who refused to learn to respect the land, the river, and those who were unwilling or unable to stop them. (pp 24-34)