Amish Trivedi, Your Relationship to Motion Has Changed


Edwin Booth on the Outside of History

that’s been going unnoticed
and finally a crack appears

can see between genes. Getting a handle
on emotions is a sign of

becoming an adult, but letting go
of concern is as well. I’m concerned

my emotions are wrong and
misattributed to other voices

and other secrets
running around houses and

into gaps in walls where
bodies of language families

are buried. If we could bring
lineages together, we’d create

beautiful words, even if they are
made up and appear

The second full-length collection by American poet Amish Trivedi, following Sound/Chest (Coven Press, 2015) [see my review of such here] is Your Relationship to Motion Has Changed (Bristol UK: Shearsman Books, 2019), a collection of poems that exist in a kind of dream-state, hovering directly between perception, anxiety and the world. As the blurb for the book on the publisher’s site reads, Your Relationship to Motion Has Changed “is an exploration through a wandering mind in the middle of external chaos. The poems trace private and public histories, from Lincoln mythos to serial killers, tied together through contorted bodies, whipped lungs, one eye firmly on the abyss, and one hand reaching back from it. ‘One more nightmare and I’m out,’ but what are we waking into?”

One more nightmare and I’m out. I seem to
remember you dancing while holding your arm
bent back and tensing. Another dream of child
rearing and another about falling down into the
gravel and being picked up, only to be dropped
again. I’ve said this before and I’ve said it before. 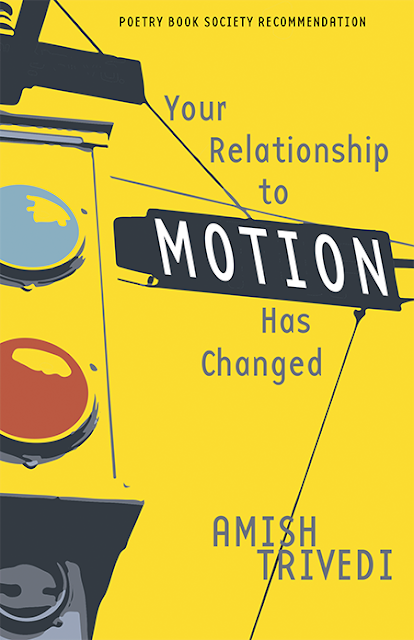 Structured in two sections of short lyrics that each take up roughly half the collection—“Ann Rutledge in the Dark” and “Body Map Symposium”—the poems in Your Relationship to Motion Has Changed build, resonate and crescendo, bringing to the fore a lyric sentence rife with music, narrative intensity and a halting, breathless precision. The poems give a sense of journeying, seeking out whatever might be immediately in the narrator/author’s path, wishing to be, as Trivedi writes in the poem “I’ll Meet You on That Other Shore,” “a wanderer / and not a tourist.”

While the author might have originally submitted an earlier draft of this manuscript as his M.F.A. thesis at Brown University’s Program in Literary Arts, it would be important to point out the time the author lived in Normal, Illinois, which might account for the thread of Abraham Lincoln poems that run through the book, from “Mary Todd Lincoln in the Boudoir,” “William Seward in the Post Office,” “Gettysburg in Film” and “Ann Rutledge in the Dark” to “Edwin Booth on the Outside of History.” Given there are fewer than fifty poems in total that make up this collection, the Abraham Lincoln-related content does seem a hefty percentage, but one that keeps with the book’s engagement with destruction, uncertainty and other anxieties of the author’s America, with anxieties resonating as deeply then as now, as the poem “Abraham Lincoln in the Yard” reads: “We are whetted through separation, // though not union, sifting through evidence / belonging to our destruction, but ashes // remain still with no wind to spread them / and no ground to swallow them.”