This is the office so
she leans forward
again. My washtub is
blood-spattered and raucous.
Even at night, I
can hear the fireworks
as they bounce off the
engraved faces. Elvis
wishes he were back
in time. My president has
a handle that lacks vision. In
the doorway I felt the brush
passed of a hand and two mice
racing the hands up and down:
these many aisles wavering
in sawdust. It’s grainy
even when you’ve gone
over a dozen times and still
there are no songs you
remember hearing.

The titles to these poems come from labels on a discarded card catalogue that I found while wandering around the basement at the University of Iowa’s Main Library in June of 2008. There were several cabinets that were being prepared to go to surplus, and while normally I paid no attention to them, the fact that this one cabinet still had labels drew my eye.

While there is probably no way of knowing exactly what the catalog’s function was, a librarian’s best guess is that they were used for a custom filmstrip collection. What the words and numbers are in relation to has been lost. The filmstrip, though, is that archaic bit of grade school technology that required the teacher to assign a student to turn a knob when the supplemental audio urged her to do so, usually through the use of an annoying beep that caused the inattentive turner to startle and flip the knob quickly but always too late.

My goal was to create a relationship between these words and in most cases, the numbers. Our minds, through the use of language, create relationships between ideas all the time, and I felt that with such a diverse set of ideas existing in one collection, there was little to do but manufacture that relationship. 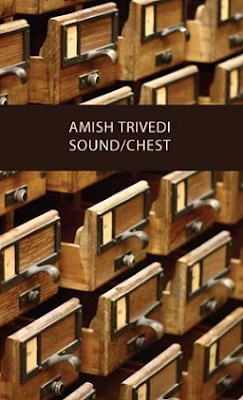 Through the course of sixty-one poems, Trivedi utilizes the card catalogue phrases as bouncing-off points, composing poems that link through a tenuous series of stitches, including tone, structure and the occasional reference to the library. In a forthcoming interview over at Touch the Donkey, he discusses some of the thematic linkages, writing: “So yes, it’s something thematically I want to figure out better but I don’t want to be heavy-handed with the social aspect of it. I want the poems to function as by themselves. It’s like Sound/Chest where not every poem is about being in a library or being in a flood: the poems should have an overall direction but maybe each individual portion can do its own thing and that’s cool.” What becomes less interesting than the relationships between the text and the numbers is the relationship between the binary that exists in each title, and their relationship with the resulting poem, as Trivedi allows the expanse of the archive to enter into his poems, presenting small bits of information and salvage on just about everything. Through the build-up of poems that slowly accumulate into the collection Sound/Chest, one realizes that there is a flood, and there is something kept safe in a drawer, both of which expand, and even multiply, even as they are allowed equal weight. As he writes: “I’ve stolen all the /regrets I know about.”

This is the worst say I know:
I had this memorized before,
so just turn it when—you’re
missing—this finger or that
one—to a lawnmower I—
heard it like that I—no
go back to the one before
the jelly—you’re the one who
spilled the paste—you’re the
one who flushed the
piece of her hair band
and shat on the edge of the—
problem I have is with
her Father—you’re missing
the beeps and we’re
out of people with—
fingers.