Stuart Ross, A Hamburger in a Gallery

This is a political poem.
Shortly I will allude
to some political things.
Not yet, though.
First: a one-winged bat
is dead on my sidewalk.
Then: the lake is crispy today.
Also: the man in the wizard gown
drove by in a Honda.
Now for the political part.
Right after I get some Triscuits.
I like them with soy cheese
and avocado. Everything
is political. “Even that piece
of chewed gum on the ground
with pebbles stuck in it?” Yes,
even that piece of chewed gum.
“So when you were saying
you were going to allude to
something political, that
was a trick, you were already
doing it.” Eat the rich. 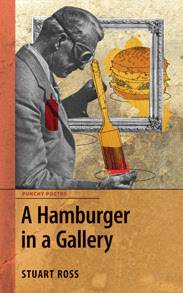 Cobourg, Ontario writer, editor, publisher and blogger Stuart Ross has been enormously productive, with chapbooks produced by numerous presses including Room 3O2 Books, The Front Press, Apt. 9 Press, Silver Birch Press, Pink Dog Press and his own Proper Tales Press (launched 36 years ago), as well as three that were released last year: Nice Haircut, Fiddlehead (Puddles of Sky Press), A Pretty Good Year (Nose in Book Publishing) and In In My Dream (BookThug). The author of more than fifteen books of fiction, poetry and essays, he’s already published two more this spring: Further Confessions of a Small Press Racketeer (Vancouver BC: Anvil Press, 2015) and A Hamburger in a Gallery (Montreal QC: DC Books, 2015). A Hamburger in a Gallery , listed as his “ninth [trade] collection of poems” (a full Stuart Ross bibliography would be interesting to see, someday), is a collection of more than one hundred pages of shorter lyrics and lyric sequences, and even include a small handful of his ongoing ‘one-line’ poems (he is also, among other things, editor/publisher of Peter O’Toole, a journal of one-line poems) that explore elements of the mundane, personal and immediate. Ross’ poetics shift from the surreal to the straightforward, from the concrete to the downright meditative and philosophical, as well as through a strange humour, self-aware and even ironic sadness, and sense of deep loss that permeate much of the collection. “I stagger in my living room,” he writes, to open the poem “IN A FOREST OF WHISPERS,” “wedged between the piano keys / You could go cryogenic / outside your own borders [.]” Some of his political references through the collection also provide interesting counterpoints and connections back throughout the length and breadth of his work, from the anthology he co-edited with Stephen Brockwell, Rogue Stimulus: The Stephen Harper Holiday Anthology for a Prorogued Parliament (Toronto ON: Mansfield Press, 2010), his infamous poem quoting Prime Minister of Canada, Jean Chretien, “A Minor Altercation,” included in his book The Inspiration Cha-Cha (Toronto ON: ECW Press, 1996), to references in earlier poems on wars in El Salvador. As he writes to open the poem “POEM DURING A TALK BY CARLA HARRYMAN”: “We are not happy / until we are almost / noise. To make noise, / the Viet Nam war / is focused on / improvisation, mingled / with kind notes / and protective armour.”

EARNING MY NOBEL PRIZE FOR LITERATURE

I have invented a new dental floss
that makes you depressed.
It will be a good seller, Dad.

Every time a car goes by my window,
my dog reads another George Eliot novel.
I will buy her a new bookmark.

Let’s move on to the issue of “size.”
The latest issue of Vogue
is bigger than the town I live in.

Mark Laba once lived a block away
and I thought that was far.
Now he lives in Vancouver.

I worry that the dog is bored.
I train her to ride a tricycle
and invent a dental floss for dogs.

Have I won
the Nobel Prize
for Literature yet?

At the end of the collection is a forty-page interview conducted with Ross by DC Books poetry editor Jason Camlot, who deliberately composed a series of “stupid questions” that Ross was meant to answer seriously. It’s a strange, and rather lengthy, read, but occasionally provides some interesting insight into Ross’ work and method. Part of the interview includes:

JC: Can you control your poems?
SR: I can control the words and where the lines break, but I can’t control how someone reads it.
JC: Can you control how you read it?
SR: No, sometimes I write a poem and I look at it a lot later and suddenly I see a lot of things I didn’t think were there before. So I don’t think I control it.
JC: How much control do you have?
SR: Of my poems?
JC: Okay.
SR: I choose the words, the lines, the sentences, the breaks. But the poem has its own life. That sounds cliché, but when you write the poem it might have some effect on you and others, and a year later it might have a completely different effect on you and different people. So, I would say I don’t have a lot of control over my poems.