A FACT CUTS ITSELF IN TWO on the landing below the Book of Dreams. Becomes part flowering muscle, half a piece standing in for the Queen. But what of the magistrate, up in arms & waving from the margins where there is endless commerce & an amaranth on the sill? & the window itself? Its hypotheses & electronics? The white wires will stand for science, lines in the author’s poker face taken on faith. Betraying the historical underpinnings, a pin pulled outside of Alexandria. (“THE LAUGHING ALPHABET”) 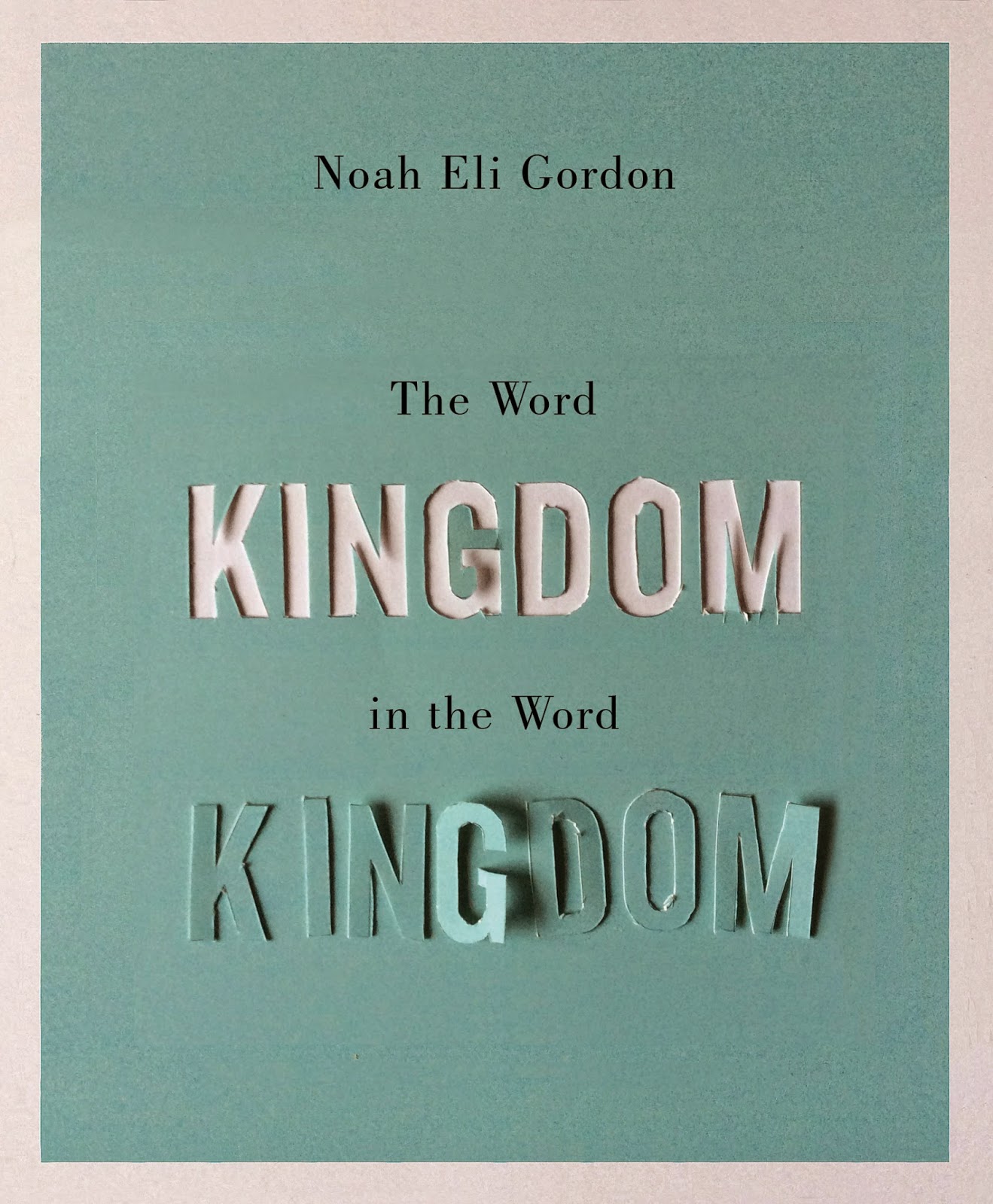 Colorado poet, editor and publisher Noah Eli Gordon’s ninth poetry collection is The Word Kingdom in the Word Kingdom (Brooklyn NY: Brooklyn Arts Press, 2015), a collection, as his notes at the end acknowledge, “composed and revised variously between 2000 and 2013.” Given the amount he’s published over the past decade—including Figures for a Darkroom Voice (with Joshua Marie Wilkinson; Tarpaulin Sky, 2007), A Fiddle Pulled from the Throat of a Sparrow (New Issues, 2007), Novel Pictorial Noise (Harper Perennial, 2007), The Source (Futurepoem Books, 2011) and The Year of the Rooster (Ahsahta Press, 2013), as well as the work-in-progress “The Problem”—it’s curious to interact with a collection of his that include some of the first writing of his that I really connected with, discovered via his chapbook Acoustic Experience (Pavement Saw Press, 2008). Gordon appears to work on multiple projects concurrently, which means that some of the work in the current collection might even pre-date a couple of his entire already-published poetry books. Going through the poems that make up The Word Kingdom in the Word Kingdom, and being aware of so much of his other poetry books have been constructed as book-length projects, this collection almost appears as a collection of stray poems, composed over an extended period as comparatively stand-alone pieces that simply accumulated. The linkages between the poems are there, both in tone and structure, even amid the variety of prose poems, short sequences and tight lyrics. Jack Spicer referred to such disconnected or stand-alone pieces as “one night stands,” and Gordon, now, has a collection of such, akin to Toronto poet and BookThug publisher Jay MillAr’s Other Poems (Nightwood Editions/blewointment, 2010), or Vancouver poet George Bowering’s book of magazine verse, In The Flesh (McClelland & Stewart, 1974), which itself riffed off Spicer’ own “Book of Magazine Verse” from The Collected Books of Jack Spicer (Black Sparrow Press, 1975). In his “Afterword” to the collection, Gordon writes:

This is where the poem begins: the Word Kingdom. When I was about twenty, I remember sitting in my room one night, annoyed with something my housemates were up to, and a bit bored with whatever my other friends were doing. It was one of those evening[s] where you just feel aimless, off-balance, agitated. There was something gnawing at me, but I didn’t know what. Then, out of nowhere, a procession of sirens passed by my house. I mean there were fire trucks, police cars, a few ambulances, lots and lots of noise—sudden, alarming noise; then, nothing. It was dead silent for maybe a second or two before the sirens picked up again. This time they seemed to come from every direction, as though they were surrounding the house. But the pitch was off, all wobbly, a weird vibrato, like electronics trying to run on nearly dead batteries. The sound wasn’t coming from the sirens at all. It was an animal sound. It was every dog in the neighborhood at once attempting to imitate the noise. It was the word kingdom. None of them could do it quite right, but damn were they going for it. It felt simultaneously sad and triumphant. It was the exact moment I decided to be a writer. I’m not writing the noise of the sirens, nor am I writing the noise of the dogs. I hope my poems take root in the silence after the two have sounded: mimetic chatter and babble paradoxically from intellection to imagination. The word kingdom in the Word Kingdom.

The collection reads as though Gordon, over the years, has been utilizing short lyrics as a way to sketch out a series of commentaries on contemporary poetry, and this is simply the accumulation of pieces that could easily have been written as short essays. These are notes on form, structure and subject, playing off a level of cultural expectation in poetry, with the occasional playful jab or exploration at elements of his contemporary field, as a number of his titles suggest, such as “A THEORY OF THE NOVEL,” “FOR EXPRESSION,” “QUESTIONS FOR FURTHER STUDY,” “AGAINST ERASURE,” “ARS POETICA,” “ANOTHER COMMENT ON THE TEXT” or the three poems titled “BEST AMERICAN EXPERIMENTAL POETRY.” I find it curious that Gordon has chosen to explore ideas of poetry through the form of the poem (much in the way that Stephen Brockwell and Peter Norman once collaborated in a conversation on the form of the sonnet through the form of the sonnet, or Mark Truscott’s short prose pieces on poetic brevity). His is a call to action, attention and an engagement with form over fashion, such as in the poem “EIGHT MEDITATIONS ON ENORMITY, PETRIFACTION, AND WORK,” that includes: “But wasn’t there much left to learn from the old ways? / Hadn’t we heard a literal train of thought approaching from / the past?” In a field of poetic discourse that is too often far too unpoetic and staid, Gordon’s notes on form are a welcome relief.

Concise articulation wasn’t what we’d wanted, exactly.
I’m not so sure the line matters. I’m not so sure
the line matters. You don’t just get on a motorcycle and become
a kind of historical category. First, they considered founding
a unified artistic school with a coherent program. Them, the sun
again disappeared over hilltops. Was this the extension of power
by an expansionist idea about the world being purely internalized?
Think: childhood but with the irony, an unattainable condition
in which we collectively float. It takes at least as much scrutiny
as standing on one shore and looking at another. Instead, we spend
a lot of tie staring at ink stains. Call it disregard for whatever
one proposes as the latest craze of substantive adherence
and simplistic acquiescence to wallpaper wallpaper wallpaper.
Look imaginatively at a pineapple and disappear. Look imaginatively
at a pineapple and disappear. The poem isn’t interested in helping you.