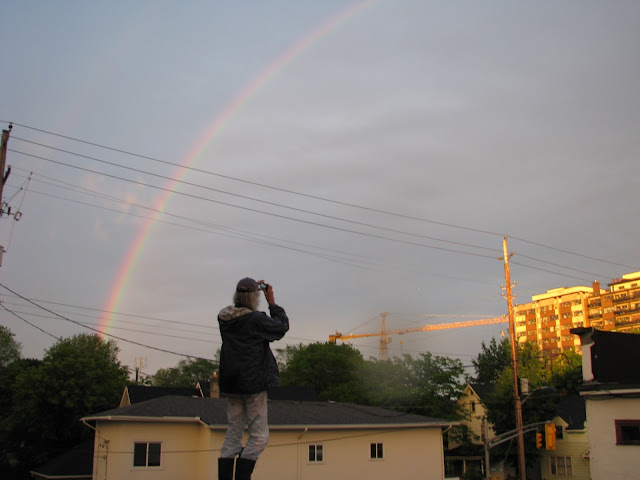 [jwcurry taking photos of the rainbow (which quickly became a double rainbow) over Hintonberg during a break in the pre-fair reading on Friday] Another small press fair has come and gone; can you believe we’ve been doing this for more than two decades now? Here is a small sampling of some of the items I managed to pick up as part of the festivities:

Kingston ON: The twenty-two poems that make up the chapbook check engine. rhinoceros. tungsten. (Puddles of Sky Press, 2015) continues Michael e. Casteels’ exploration of surrealist prose, lyric narrative and unusual image combinations, such as in his poems “MY MOTHER, THE FLY,” “A SPECIAL STUDY OF THE MOOSE” and “TOTALLY COMPULSIVE BEHAVIOUR.”

THE ROBOT RIDES A BUS

While crossing the street, a robot is hit by a bus. Small part of the robot roll down a hill, frayed wires spark, lights flash. The bus driver kneels beside the robot and cries, “If I had been a surgeon you might have been repaired. If I were a priest you’d be blessed.” The robot attempts to raise an arm but there is only the grinding of gears, the leaking of oil. The robot tries to speak but its voice is garbled and growing faint. Its many lights flicker and dim as silence envelops the scene. A robot lies in the street. A crowd is gathered. The driver, still on his knees, cradles the robot’s dented head. The crowd closes in and hoists the robot to its shoulders. In a short procession they enter the bus. The driver wipes his eyes with a heavy sleeve, and follows. The door closes. The bus starts, lurches into gear, and continues down the rolling hills, towards a lake that is always in the distance.

What really strikes in this small collection are his short prose pieces, existing as both prose poem and incredibly dense short story, writing out a compactness that says everything the story requires in an incredibly small space. It’s curious to see the subtle, ongoing strains of Stuart Ross’ influence float in, around and through Casteels’ writing, something that lives just under the skin of poems that show an increasing curiosity and wit, as well as an increased sharpness and clarity. With a dozen or more chapbooks under his belt so far, Casteels is a writer worth paying attention to. Is a first trade collection that far away, perhaps?

It’s dark inside my inner ear. I light a torch to find my way, scorpions scuttling around my feet. The low, slow howling of wind—the kind that precedes a storm, or in this case a train—scares my hiccups right out of me. If it were my train I’d be the one shovelling coal, hauling thousands of turnips through the night.

Ottawa ON: I’ve been increasingly impressed with the work of Ottawa poet Marilyn Irwin, and the launch of her fifth chapbook, the blue, blue there (Ottawa ON: Apt. 9 Press, 2015), provided the opportunity to be reminded of just how much she’s been improving between publications.

Irwin’s poems [see my recent Jacket2 interview with her on such here] explore a series of moments both large and small in a compact space, pinpointing a level of minutiae that is so often lost or overlooked, as well as a space one can only describe as increasingly local. Her work invites comparisons (obvious or otherwise) to similar works by Nelson Ball, Cameron Anstee and Mark Truscott, among others, and the poems in the blue, blue here are quiet and sharp, insistently present and remarkably calm. Hers are poems that enter the body through the skin.

I’ve decided to split myself in two. into. two fish inextricably linked by fishing line. Möbius strip of soggy contracts, abstinence. if. gill gape. tension binds intrinsic; this is how waves are made. scream ekes in the confines of padded, cubicle walls. padded cubicle walls. not padded. walls. through. note the difference.