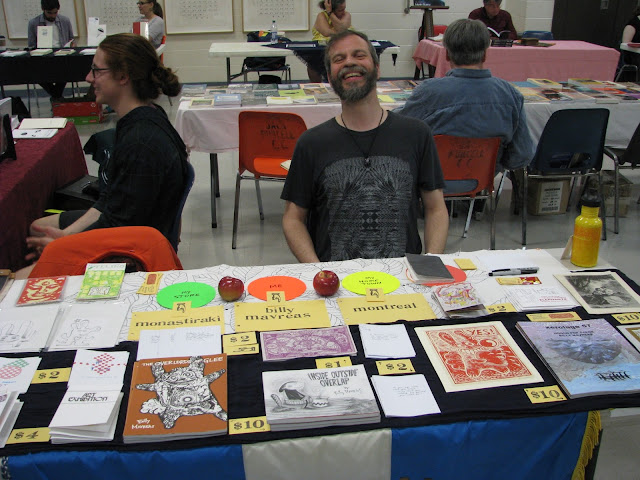 My first report on our small press fair lives here, in case you missed it. Here are a couple more items I managed to pick up over the weekend. Are you jealous yet?

Kingston ON: It took a while for me to pick up a copy, but I finally collected Phil Hall’s limited-edition letterpress sequence, X (Thee Hellbox Press, 2013), a meditative breath-take constructed out of fragments, pauses and a steady, staggered cadence, much as any regular or irregular reader would come to expect from Hall. There is always such delight that comes from reading a new poem by Hall, watching his lines and language bounce and gyrate across patterns and the page, reveling in unusual sounds, shocks and digressions, even has he explores a particular series of dark moments from without and within. As he writes on the first page: “arcs   letters   curls of let / wait wit   wait   a song // grows a nail   from a moo— [.]”

Hall’s poem is beautifully designed and printed by Hugh Barclay in a numbered edition of 106 copies, with artwork throughout by Michèle LaRose and signed by all three (mine is #87). This is the 47th book produced by Barclays’ Thee Hellbox Press. 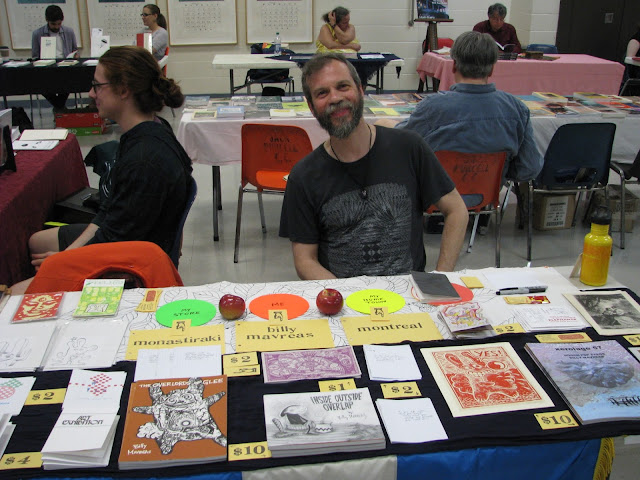 LaFarge WI: It was good to see Montreal’s Billy Mavreas [pictured] make his first ever appearance at our Ottawa fair, especially with publications such as his HOOCH POP TYPOS (Xexoxial editions, 2013), published as “xerolage 57,” a collection of concrete poems/visual images. As Mavreas writes at the back of the small collection:

With exception of 3 pieces, these works saw their beginning as images found via random internet image searches. An image, representing the search ‘document’, for example, would be downloaded, colour removed, high contrast black and white implemented and then filter, copy, paste, crop, repeat until finished. The 3 remaining pieces saw their start on the photocopy machines’ glass and then were brought in for alteration.

This publication, whose title is an anagram of the three words: Photo, Copy & Shop, is a welcome real world manifestation of these digital impulses.

Part of what I’ve always found curious about Mavreas’ work is the fact that he appears to have come into concrete and visual poetry via his work as a visual artist, as opposed to from a more traditional text-based writing practice. Working very much in the “dirty concrete” realm of concrete/visual poetry, his bio informs that: “His foray into concrete poetry and asemic writing started early via a love for mysterious symbols, rocknroll lettering and SF&F. Xerox manipulations and mail-art sealed the deal in the late 1980s as he entered and participated in the network as EHEL. His art practice is based on accumulation and accretion, consisting of various personal collections, made and found, that resonate with him on an aesthetic and spiritual level.” As part of an interview forthcoming at Touch the Donkey, he writes:

Many artists I’ve seen who explore visual poetry and comics tend to stay closer to the realm of abstract or experimental comics. In my case my comics have been experimental and I still make abstract comic work but I’ve been tending towards more direct narrative, straight up comic work so to speak, which is a great challenge, whereas my poetry tends way more towards abstraction, conceptual writing and visual poetics. My poetry that isn’t visual is usually rock lyrics, bumper stickers, band names and other stuff that remains more or less private, unpublished or juvenile. 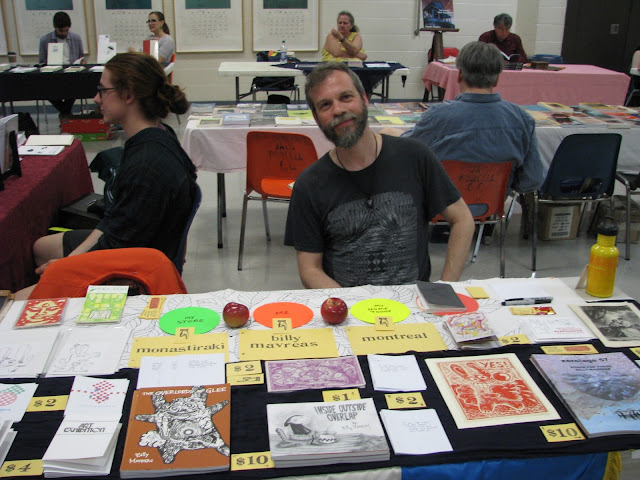