All Roy Miki’s collected poetry and critical writing swirls around one historical maelstrom, but without sinking into it, the general terms of which Giorgio Agamben pessimistically diagnosed as “the new biopolitical nomos [law, custom] of the planet” (176): the concentration camp. Miki lived through one specific form of its apparatus as a Canadian child, his family forcibly removed from Haney, B.C. to Ste. Agathe, Manitoba during the Second World War, the repercussions of which, due to displacement and financial loss, internment, and coerced racialized identity as Japanese Canadians, instigated a context and reality of social trauma for tens of thousands of people. Today, the optimistic legal outcome and renown of his social justice and cultural activism remain of precedent-setting significance for all, and in particular for communities still extricating themselves from Peacekeeping Canada’s sordid domestic history of conflating race with citizenship and democracy with unacknowledged racism. (Louis Cabri, “Floward”) 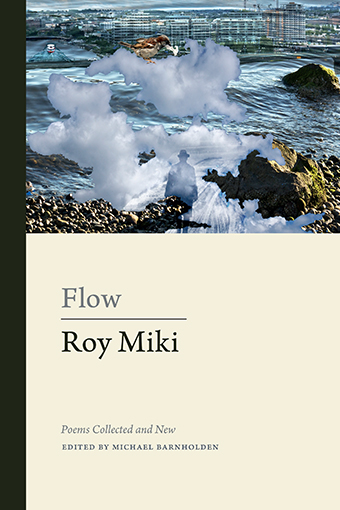 Miki’s is a poetry that might have emerged through an interest in studying literature, but developed as an indirect means to articulate and engage with some of his other literary and cultural works, including his lengthy battle for redress from the Canadian government for Japanese Canadians. It becomes fascinating to see how Miki’s poetry, then, exists in parallel, or even in response to his other works, existing entirely in tandem with his critical and cultural works. In the introduction to his lengthy interview at the end of the collection, “Inter View,” editor Michael Barnholden speaks to what he calls the “multiplicity” of Miki’s work:

Since then I have come to see that multiplicity is the key to all of Roy’s work: there’s a lot going on and Roy always wants to get it right. He’s also a public intellectual through his writing, editing, publishing, and teaching. A quick look at his bibliography suggests a seemingly impossible breadth and depth. Sure, there is the poetry, but there is also the scholarly work on William Carlos Williams, bpNichol, Roy Kiyooka, and George Bowering, a couple of volumes on groundbreaking literary criticism, activist archival, and political work, even a children’s book written with his wife, Slavia Miki. And to those accomplishments we must add editor of Line magazine, later merging with West Coast Review to become West Coast Line, and publisher of a chapbook series, pomflit, with Irene Niechoda. And of course there is his long and storied career as a teacher. A list of students he has influenced, who have gone on to accomplish much with his help and guidance, would be lengthy. I consider myself lucky to have been among that company. Oh yes, and when he retired from teaching full-time, he taught himself digital collage technique.

I quite like that the collection ends with an interview with Miki, a focus on his own words on his work that I appreciate, providing multiple insights and entrances into his writing and thinking:

M: Those early poems in saving face are connected to scholarship because they have an archival component. You are looking at an archival document, your parent’s internment ID card, and the poem begins to compose in ten parts. Once you find that method of composition, it seems to me that your scholarly pursuits lead to your poetic pursuits. They inform your poetic pursuits in many ways.
R: Yes, I’ve tried not to separate the two activities. Poetry as research and research for poetry have been mutual concerns. An obvious connection can be seen in the various poems I’ve written using found language from my archival research. Sometimes I’ve simply restructured some found text in poetic lines, as for instance, “higher learning,” albeit with the addition of a title. Other times I’ve inserted found texts in a poem.

What becomes clear very quickly, as any reader of Miki’s already knows, his is a poetry of syntax and politics, and one that engages with collage, overlap and collision, writing out short phrases, images and sketches intended to interact with and against each other. The perception of a single image is forced to shift in even the most subtle ways through the interaction of what might follow. Since his retirement from teaching, this collage-element has simply become more overt with his work in digital collage, something he has incorporated into his poetry, and are included as part of the collection. His work had long been grounded in image, even incorporating photographs from his personal archive in early works, but, over the years, the blend has become more complex, overt and far more subtle. Despite all of this engagement and multiplicity, there is something wonderfully understated about Miki’s writing, something that, unfortunately, has possibly caused his poetry fly under the radar of a wider Canadian readership, even against the fact that his Surrender won the Governor General’s Award for Poetry. And yet, Miki’s poems are, in their own way, a forceful, consistent calm against a series of raging storms, and very much worth engaging, and sinking slowly into. “without reading,” he writes, in the poem “KIYOOKA,” “there is // no body[.]” The poem continues: