I paint this broader picture, or rescaling, of Canadian literature because Fred Wah’s poetry, no matter how localized it is in the particulars of life, landscape, language, and perception, has also always been transnational and globalized; from the confluence of poetics across the Americas to Europe and Asia, to the content of the works themselves, with its configurations of a hybrid identity that fully develops through this volume (which leads to Wah’s groundbreaking book that refigured writing that engaged with the politics of identity – rather than the rather narrowly defined “identity politics” – Diamond Grill [1996]). The great subtlety of the poetry in Scree is in its expansiveness: a movement from a grounded localness that carries a weight in its details of place and in its precision of language, to syntactically compressed narratives that sweet from “my mountains” of British Columbia to “your [Wah’s father] China youth and the images of place for you before you were twenty are imbued with the green around Canton rice fields, humid Hong Kong masses” (“Elite 8,” Waiting for Saskatchewan, 67-68), Scree pulls together the early and unsure Tish poems and thirteen books, Lardeau (1965), Mountain (1967), Among (1972), Tree (1972), Earth (1974), Pictograms from the Interior of B.C. (1975), Loki Is Buried at Smoky Creek (1980), Breathin’ My Name with a Sigh (1981), Owners Manual (1981), Grasp the Sparrow’s Tail (1982), Waiting for Saskatchewan (1985), Rooftops (1988), and So Far (1991) – and it does so in a manner that creates a movement that foregrounds the way in which themes and poetic forms (the relationship of form and content again!) are in dialogue throughout the book. After many readings of the gathered work, Fred and I decided to deviate from a chronology shaped by the book’s publication dates and instead we ordered Scree roughly according to the dates the poems were written with a particular eye to the shifts and development of poetic form. The dialogue between Fred Wah’s earlier works tests the possibilities of a poetics of place, of a syntactic dynamism opened by the North American postwar experiments in form and a push against the Western box of knowledge (a push that is threaded through 1960s counterculture up to the globalization of the early 1990s). The later works in Scree move away from the more open forms of the earlier works and combine Japanese poetic forms with the dense and materialistic use of language in order to approach the narratives of place, diaspora, and belonging that recur throughout the works in Scree. This relationship of the testing of poetic forms and the shifts, developments, and repetitions of themes cohere powerfully in “This Dendrite Map: Father/Mother Haibun” from the Governor General’s Award-winning Waiting for Saskatchewan and sets the ground for Diamond Grill. (Jeff Derksen, “Reader’s Manual: An Introduction to the Poetics and Contexts of Fred Wah’s Early Poetry”) 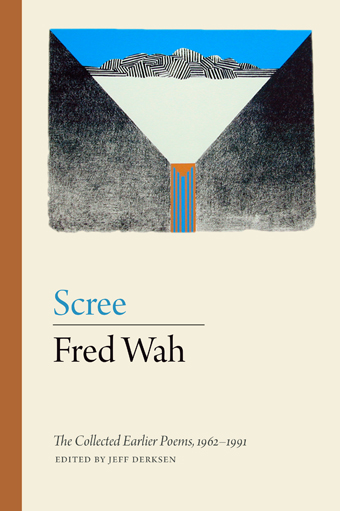 It is a bit overwhelming, joyously so, to think that the six hundred-plus pages of BC poet Fred Wah’s hefty Scree: The Collected Earlier Poems, 1962-1991 (Vancouver BC: Talonbooks, 2015), edited by poet and critic Jeff Derksen, is only a selection from Wah’s first three decades of publishing. The book opens with poems published in Tish, and moves through thirteen books over a thirty year period, ending with a selection of his utaniki from So Far [see the short piece I wrote on So Far for Brick Books last year, here]. Still, the boundary line between what might be seen as “earlier” (which does presume a “later”) is a bit curious, and appears to be one of half-way; 1991 is roughly the half-way point between then and now. Given that at least one of the collections in this list, Waiting for Saskatchewan, has appeared in reissue, it wouldn’t be as an argument of which titles remain “in print” against those that do not.

Talonbooks has long been unique in Canadian publishing for their attention to publishing selecteds by Canadian poets, from the early series of selected paperbacks (eight in all) in 1980 by George Bowering, bill bissett, bpNichol, Daphne Marlatt, Roy Kiyooka, Frank Davey, Phyllis Webb and Wah, to the mid-career overviews of poets Sharon Thesen and Barry McKinnon, to these more recent omnibus collections, including Roy Kiyooka's Pacific Windows, The Collected Books of Artie Gold, Phyllis Webb’s Peacock Blue, and now, Fred Wah’s Scree. Edited by Derksen, with a hefty critical introduction by him as well, the book is gorgeous, and must have been a design nightmare, attempting to keep as close as possible the integrity of the original publications into a single volume. The resulting volume—shift of image, colour and font—is a breathtaking accomplishment that does far more than simply replicate a selection of thirty years of writing and publishing, but work to present some sense of what those early publications might have felt like in their original forms. The book also includes a selected bibliography, taken from the Fred Wah Digital Archive, but one that only goes up to 1991; whereas I understand that I could simply look up what he has produced since, the omission of such information is a curious decision (and one that hasn’t yet caught up to the small mound of reissued books that have appeared over the past decade or so).

Part of what has helped Wah become one of Canada’s most engaging poets has been in his ability to remain engaged in exploring how and why poems are constructed, from the breath of the line-break to the breath of his prose lines, as well as his inquiries into his “bio-text,” and larger questions of place and racial identity. What also becomes very clear through Wah’s Scree is his ongoing engagement with breath, gesture, pause and improvisation (something he discussed earlier last year in an interview posted at Jacket2), from the poem “WHEN,” from Lardeau, that writes “When it is hot / when in the afternoon / tomorrow / last night / today when / to expect / the way / to take / (of / the mind’s meadows / yes),” to the final page, from So Far:

Out of the corner of my eye more rocks. And out an ear I hear a few birds sing their particular song, not solitary: the creeks rush and gurgle down to the valley below. In a corner of my mind is tomorrow’s two-and-a-half-hour hike out to the trailhead and then the long drive home. But nowhere else.