rules were established. i evolved the seemingly arbitrary number of one hundred and elevenpoems out of a close reading of Nelson Ball’s annotations to bpNichol’s konfessions of an elizabethan fan dancer (first published by Bob Cobbing in 1967; later reprinted by Nelson Ball in 1973; and then further reprinted again in an annotated, deluxe edition in 2004 – it may very well be the most known book of typewriter poetry from canada? or is that spot reserved for Steve McCaffery’s carnival panels? it’s a toss up?) my wish was to write out a body of work with proportions epic enough to carry freight and punch above its weight but not so large as to prevent my meeting the challenge i set for myself. so i started hitting the keys, clacking my way out of the project, watching the poems slowly bubble up one at a time, initially the idea was that i would start and then work at some sort of breakneck speed to carry to completion the entire volume in one fell swoop, the way many a mystery novel had been written. this worked well enough at first, but as i wrote deeper and deeper into the book, newer texts continued to come off better than those which had gone before, and i realized with a kind of alarm how little i actually knew about a subject i’d pretended to know so much about for the past two decades. i had only a superficial understanding of the typewriter and of the typewriter poem itself, and, furthermore, no one really had this understanding any longer. the typewriter had been made to evaporate from our culture like a stain of breath upon a mirror. the problem was that patience and concentration were no longer qualities that anyone possessed. yet these were simultaneously what was most required to bring about excellent typewriter poems. so i spent the rest of the summer in a concerted effort teaching myself how to concentrate, how to be patient and how to meditate a poem into being out of nothingness. (“Konfessions of an Expanded Typewriter poet”)

In an incredibly thoughtful and articulate post-script to his new collection of concrete and visual poems Clean Sails (Vancouver BC: New Star Books, 2015), Windsor poet Gustave Morin provides an intriguing overview of his work as a “typewriter poet.” He writes: “i first sat down to a typewriter in an attempt to forge a typewriter poem back in 1990. at the time my head was newly aswim in all things concrete, and the typewriter poem had firmly established itself as a major corridor in this immense but largely ignored idiom.” Via the BookThug blog, Pearl Pirie has already offered her own take on the book:

Excuses. Don’t need no professional quality acrylics to render a clear thought. Given sand, duct tape, or typewriter and the mind which is devoted to expressing, pushes any means to the necessary degree. It is not the tool but the mind behind it. Playful, meticulous, and sober and with more commentary on politics than most verbal poetry dares or cares to do with minimalist “violence as ornament”. Eye-dazzle, yes, but not decorative and pleasant and easy as some poetry, nor arbitrarily shutting the reader out either. 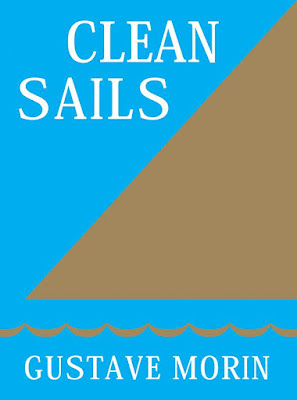 Subtitled “TYPEWRITER POEMS / FROM THE SUN / PARLOUR OF CANADA,” Clean Sails is, as the press release informs, “120 typewriter poems (and an exegisis) representing thousands of hours of typing – five years in the actual writing, after a 20-year private apprenticeship and period of incubation going back to 1990, when his formal experiments with concrete poetry began in earnest.” There is an element of Morin’s focus on working with the typewriter, which some would consider an obsolete tool, that is reminiscent of Calgary poet derek beaulieu’s ongoing letraset explorations in visual and concrete poetry. There is something uniquely compelling in watching just about anyone so deep in such a study, especially one focused on the manual typewriter, a tool that many even within concrete and poetry circles (with a small handful of exceptions) have moved beyond, and Morin’s results are playful, methodical and remarkably fresh. Through Morin’s detailed and complex pieces, he proves that there is still much to explore, even while acknowledging his many influences throughout. In an interview conducted by Mike Borkent, in the most recent issue of The Capilano Review [see my review of such here], Morin discusses his decision to pursue an ongoing work utilizing the typewriter:

Back in 1990 I had the choice to fall with aplomb into what I’m doing now or flop resignedly into a very prosaic learning curve around computers and their limited use. I opted to keep computers out of my work. Almost as a rule, there is no electricity employed in the basic construction of my poetry. Teensy weensy scraps of paper, glue, ink, razorblades, scissors, (manual) typewriters, occasional letraset, spray paint, liquid paper, etc. Everything I make is real. And by that I mean it has an actual referent in the world, a piece of paper somewhere housing all of the various coordinates. (I don’t even want to publish my work on the computer, though this seems a hardline harder and harder to maintain.) I don’t know why, but it seems important to point all of that out. Mainly because people can’t tell: “Oh, you made this on a computer?” they ask. And I’m forced to say “no. No computers in any of it.” And then it becomes a polemic (for them), which it isn’t (for me). These preferences and discriminations have been with me all along. Did I choose wisely? Often, I’m not sure. But that’s a bit of what I’m poised on: the brinksmanship of that severe divide. Born of a generation that was awash in computers, but long before their obnoxious wholesale domestication. Once upon a time, not too long ago, I had the choice of opting out. Anymore, that choice no longer exists. And the planet doesn’t seem to be better for it, in my opinion.