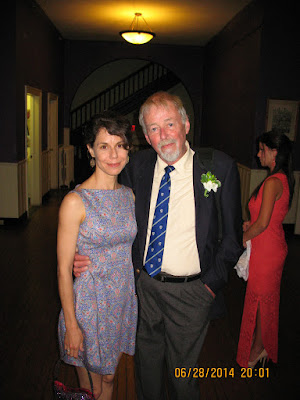 Ray Smith (b. 1941) [photo with his dear friend, Jessica Grenier] is from Mabou, Cape Breton, and largely grew up in Halifax. After graduating from Dalhousie University (BA ‘64) he lived a few years in Toronto, but from 1968 lived in Montreal where he taught English at Dawson College. After the Spring 2007 term, he retired and moved home to Mabou, where he lives in the house his grandfather built.

He has two sons, Nicholas (30) and Alexander (26). Nick, a fine mathematician, is married to Emily and lives in Richmond, VA. Zander is doing an MA in linguistics at the Frei Universetät in Berlin; he is fluent in English, French, German, and Dutch.

“A brilliant stylist” (Ox Comp to Can Lit), Ray nonetheless has no Smith style: each of his seven books is unique. Somewhat over half the work is comic, often hilariously so. Although largely set in Canada with Canadian characters, the books reflect his extensive travel and international perspective. Important sections of his work are set in Iceland, Venice, Edinburgh, Paris, Zurich, and Munich, and other languages appear often.

A dramatic performer, Smith has done over 250 readings of his work in North America and Europe.

He was writer-in-residence at the University of Alberta during the 1986-87 academic year.

A: I’d come to accept that I am not a fast writer. I had only CB and LNT published, and the Jack Bottomly book written but which no one would touch with a barge pole. But when I arrived in Edmonton I was anticipating the imminent appearance of Century in October, so I was excited about that as it seemed to some extent to legitimize my appointment at U of A.

A: I can’t say that I was influenced in my writing by the landscape or by the people I met at U of A.  However, I certainly found the landscape ravishingly beautiful, and the people I met, almost entirely members of the English department, I found vibrant and well above average in intelligence, wit, and attainments. I don’t consciously think about things in this way, but I suspect I sensed that the U of A was very well funded, and thus could afford to hire only the very best.

A: Mainly I got to enjoy a year away from teaching, a real blessing. With Century appearing in October, I had no wish to start a new novel, so I did a long critical article for Metcalf’s anthology Carry on Bumping (ECW, 1988) entitled “A Refusal to Mourn the Death by Bullshit of Literature in the Eighties.” It’s an appalled survey of modern critical theory – semiotics, structuralism, deconstruction, etc. I was also doing perhaps a reading a week from Lethbridge to Fort MacMurray, and caring for son Nick who turned two that winter and indeed first walked without help in the big English Dept office. His mother (my then wife) Anja is a flight attendant who continued working out of Montreal that year and joined us when she could, generally a few days every week or three. I had a number or reliable baby-sitters.

A: It has been 39 years so my memory of such is a bit dim. I do recall that very few if any students came to see me. I doubt they thought me aloof or irrelevant, but were too busy with courses to waste time with me. I sat in on a creative writing seminar or two, but don’t recall any follow-up. My remit also included advice to any non-university writers from Red Deer to the Nunavut border. I was required to read at least, but perhaps only, twenty pages. A few stood out. One was a man who wrote a novel about Alberta; it began before the Rockies were formed and the first human appeared at about page 125. Some I saw in person. One was a radio journalist who told anecdotes about life in private radio. Another was a timid high school girl and her mother. The girl wanted to take a BA, while her mother wanted her to do a BEd so she could get a job. I expect the mother won.

Posted by rob mclennan at 8:31 AM
Labels: interview, Ray Smith, University of Alberta