Sarah Manguso, Ongoingness: The End of a Diary

I didn’t want to lose anything. That was my main problem. I couldn’t face the end of a day without a record of everything that had ever happened.

I wrote about myself so I wouldn’t become paralyzed by rumination—so I could stop thinking about what had happened and be done with it.

More than that, I wrote so I could say I was truly paying attention. Experience in itself wasn’t enough. The diary was my defense against waking up at the end of my life and realizing I’d missed it.

Imagining life without the diary, even one week without it, spurred a panic that I might as well be dead. 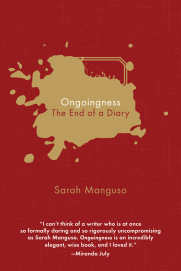 And so opens American writer Sarah Manguso’s new Ongoingness: The End of a Diary (Graywolf Press, 2015). Manguso has long been one of my favourite writers, and her writing is, quite simply, remarkable. I had already been an admirer of her poetry, but her move into non-fiction/memoir has really opened up the possibilities of the form. A short essay-book on memory, Ongoingness: The End of a Diary is built as a slow accumulation of self-contained sections, and begins by describing how she has composed a daily diary for most of her life. She quickly describes the realization that having a child both opened up the impossibility of daily work on her memory-project, and allowed her the permission to not have to record every single moment. As with much of Manguso’s prose, the writing in Ongoingness: The End of a Diary is elegant and incredibly straightforward, and deeply intimate while allowing herself, seemingly, to guard a variety of personal details that would, quite honestly, distract away from the purpose of the essay. Her writing is also extremely difficult to excerpt, and must be seen as an entire, singular whole. She writes:

I still needed to record the present moment before I could enter the next one, but I wanted to know how to inhabit time in a way that wasn’t a character flaw.

Remember the lessons of the past. Imagine the possibilities of the future. And attend to the present, the only part of time that doesn’t require the use of memory.