What morning does is trick you
into thinking someone’s just left
to go to the bathroom, or is drinking
tea at the big table in the living room,
or is simply thinking of you while they
stand in front of a full-length mirror and twerk.
You think someone is there, but they’re gone.
Morning makes you think you can solve problems,
do math, send thoughts, and change
your clothes. Morning is as light and creamy
as an instrument of hypnotism or cuisine. Perhaps
your heart was put in your chest simply to pump sludge
around your body until it hits your brain,
and you stumble around like a dork. 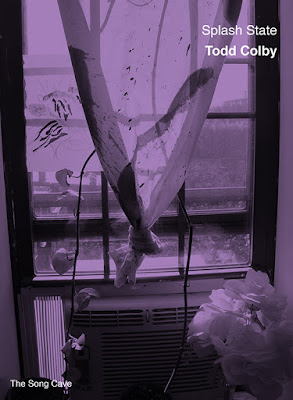 Endorsed, no less, by American poet John Ashbery, is Brooklyn poet Todd Colby’s sixth poetry collection, Splash State (Brooklyn NY: The Song Cave, 2015). Composed as a series of lyric monologues, the poems in Splash State are composed via a relatively straight narrative utilizing a variety of quirks, turns and non-sequiturs that combine into oddly compelling, and occasionally wise, poems. “I miss you like Goddess Dressing,” the poem “My Dream of Everything” opens, “like Swiss Miss Hot Chocolate.” The poems work to unsettle meaning and expectation, forcing a reader’s attention as it leaps between the unexpected, subversive, surreal and even somewhat banal. These are highly crafted poems, each composed with a purpose and meaning that Colby deliberately subverts even as he moves ever closer to meaning. As the poem “Let Us Know You’re Here” opens: “I stuffed my silver spacesuit / full of cashews. I wanted to explain / about how when I’m out there, and physics, / and the food they give me, well, I’m rambling.” Some of these poems might appear hastily written and odd for the sake of odd, but that is very much on purpose; they are anything but.

A ship we all know about is still shipping or floating. The people work on it, or entertain themselves on it, or drink the milk of various animals on it. They have conversations about stuff, and then they listen back to the tapes of what they just talked about; so they’re always catching up with what they just said. They scoot around on the ship and play these little fuck and frolic games on it. I know a lot about it, so if you need to know more about it, please feel free to ask me all about it.