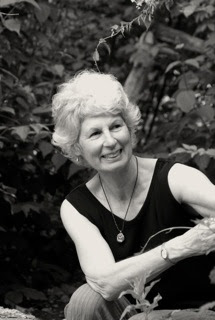 Daphne Marlatt’s many poetry titles include Steveston (2001), The Given (awarded the 2009 Dorothy Livesay Poetry Prize), and Liquidities: Vancouver Poems Then and Now (2013). House of Anansi recently published a new edition of her acclaimed novel Ana Historic, with foreword by Lynn Crosbie. Last year Wilfred Laurier University Press released a selection from 40 years of her work, Rivering: The Poetry of Daphne Marlatt, edited by Susan Knutson. She has taught and served as writer in residence at half a dozen universities, edited oral histories and several small literary journals, written essays, and a contemporary Canadian version of a Japanese Noh play (The Gull) as well as a libretto for a chamber opera, “Shadow Catch.” In 2006 she was appointed to the Order of Canada and in 2012 she was awarded the George Woodcock Lifetime Achievement Award.

She was writer-in-residence at the University of Alberta during the 1985-86 academic year.

A: That residency at U. of A. was my first full academic year residency, not my first residency but the first I could do for that long as my teenage son was by then living with his dad in Seattle. I was living with Betsy Warland in Kitsilano and we were in a sort of hiatus, recovering from the energy expended in organizing the national conference Women and Words, followed by a collective editing of its proceedings, and then organizing the West Word summer school that grew from that conference. The previous year, Longspoon Press in Alberta had published our companion collections of poetry. And incidentally, Touch to my Tongue, my suite of poems for Betsy, had begun on a long drive to Winnipeg for my 1982 fall residency at U. of M. I had also begun editing Tessera with Kathy Mezei, Barbara Godard, and Gail Scott. By 1985, having resumed work on my much-interrupted novel, I was beginning to re-immerse myself in historical (1870s) and period (1950s) Vancouver, so it was a curious time for a move to Edmonton, to a winter so cold the tears froze on my eyelashes just walking from parking lot to front door. I’d learned a bit about the residency from Phyllis Webb, who had been there some 5 years earlier, and I was glad to join a program that had already appointed a number of remarkable women writers, thanks no doubt to Shirley Neuman. The range of writers I worked with in my WIR room was very stimulating, as were the writers brought in for the reading series Doug Barbour (I think it was Doug then) organized. Personally, that time was a sort of watershed year for me. I discovered that I was so anemic I couldn’t walk more than a block or two so I went to see Edmonton’s wonderful Dr. Steven Aung who treated me with acupuncture and iron shots and told me to slow down, meditate. By the time the residency was over, I had enough energy to set off on a reading tour of Australia with Betsy – so the slowing-down didn’t happen right away.

A: Well, trying to recall details from 30 years ago is a bit taxing for this not-so-reliable memory. The internal markers were probably writing the second poem, “character,” for Nicole Brossard to translate in our collaborative transformance project (Nouvelle barre du jour/Writing, 1986) and trying to finish Ana Historic which Coach House published in 1988. Also continuing to learn how to write about writing with both a poet’s approach to language and a feminist sensibility, which I did in a number of articles published that year.

However, there was an external marker too: learning how to work with a diversity of writers and the writing they brought to my little room in the English Department. They came from the University, some from town, some from farms a number of miles outside Edmonton – one I remember, the wife of a strictly observant Mormon – so, sensing what might be useful for someone who wrote outside the limits of my own experience and finding appropriate ways to convey it. That was, for me, always the challenge in such residencies and when some phrase or suggestion “clicked” with that writer so that her work could open in a way that felt right to her, then such a moment also felt like something to celebrate.

A: During that winter in Edmonton, I suddenly understood, when salt tears froze to my eyelashes in the short walk from parking lot to building, that one could die of cold. I’d never seen snow before we immigrated to Canada and snow in North Vancouver was for me a rare rapture. But that winter, my first on the prairies, I understood its threat. I loved the North Saskatchewan river valley in Edmonton, the bridges over it, the trails running along it but the Fraser was still the river I fully responded to.

Having so little energy at the time meant I didn’t go out to as many literary events as I would have liked.  But the literary community there seemed cohesive (more so than in Vancouver), friendly, and active. Doug Barbour and Shirley Neuman were very active in connecting with other writers, both as faculty members in the English Department (and I believe Shirley was busy organizing a new Women’s Studies program then) and on the board of NeWest Press, Shirley also with Longspoon Press which I think she founded. Both were dynamos of energy and enthusiasm, however differently each played out that energy.

Posted by rob mclennan at 8:31 AM
Labels: Daphne Marlatt, interview, University of Alberta