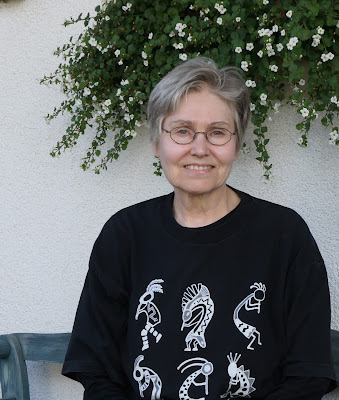 Leona Gom (born 1946) is a Canadian poet and novelist. Born on an isolated farm in northern Alberta, she received her B.Ed. and M.A. from the University of Alberta in Edmonton. She has published six books of poetry and eight novels and has won both the CAAAward for her poetry collection Land of the Peace in 1980 and the Ethel Wilson Fiction Prize for her novel Housebroken in 1986.

Her work has been included in many journals and over fifty anthologies, and five of her books have been translated into other languages. Her novel The Y Chromosome has been optioned for a movie and has been used as a text in both women’s studies and sociology courses in Canada and the U.S. Her latest novel is The Exclusion Principle (Sumach Press, 2009).

The Leona Gom Archive is housed at the University of Calgary.

She was writer-in-residence at the University of Alberta during the 1987-88 academic year.

A: I was at a good place in my writing, though teaching at college left me chronically short of time. The first two novels had done well and gave me the confidence to try one a bit more experimental, and this, The Y Chromosome, was the one I completed during my U of A year. It required some research into genetics, and the university libraries were a great resource which I would not have had at home. I loved my year there. My office was a perfect place to work. And it was a constant reminder of how much I owed U of A for how, in the early 1960’s, it welcomed students like me for whom a university education had been an almost impossible dream.

Q: How did your experience there compare to other residencies you’ve done?

A: My U of A residency was by far the best I have done. But that is in part because it was for a year and the others I had were for shorter periods (6 months, 2 or 3 weeks), and of course then it was much harder to settle into a routine and balance other demands of visiting classes and holding office hours. At U of A I did as much writing as I needed to and also had more than enough time for office hours.

A: I kept regular office hours two or three times a week and accepted manuscripts to read and evaluate, though I learned quickly to put a limit on the number of pages. A surprising number of people were from off-campus, and it was nice to see the program had this outreach. I visited some classrooms, did a few guest lectures, met with a book club or two, judged three or four writing contests, wrote some reference letters, got to know some of Edmonton’s new writers with whom I am still in touch.

A: I was able to start and finish a first draft for my third novel, The Y Chromosome, which became my most popular and well-reviewed novel. This was certainly what I had been hoping to achieve, but I had also been eager to return to U of A and to Alberta, where I was born and grew up and where my writing had been so strongly rooted.

Q: The bulk of writers-in-residence at the University of Alberta have been writers from outside the province. How did it feel as a University of Alberta graduate, to be acknowledged locally through the position? Given you were returning to familiar grounds, were you influenced at all by the landscape, or the writing or writers you interacted with while in Edmonton? What was your sense of the literary community?

A: I was very pleased to have had this opportunity to return to U of A, of course. I grew up on an isolated farm in the north Peace country, and being able to attend U of A in the 1960’s was predictably life-changing.  So, twenty years after I left Alberta looking for work, it was a treat to be invited back for a year. The campus and the English Department were still familiar enough for me to re-meet some of my former professors, fellow students, and writers I had known at the beginning of their careers. During my writer-in-residency I was envious of the writing community that seemed to be flourishing in Edmonton, because where I lived, in a suburb of Vancouver, I had relatively little contact with such a close-knit group. As for being influenced by the landscape, yes, all of my poetry books have a strong Alberta origin, especially the pioneering farm poems. The futurist novel I worked on during my residency was also set both on a northern Alberta farm and at a southern Alberta university, so it was fun to revisit both those parts of my life.

Posted by rob mclennan at 8:31 AM
Labels: interview, Leona Gom, University of Alberta

Lovely, generous woman. A fine writer. Thanks, Leona for your writing.