Routine Is Not a Cradle

Ships seamed the ocean, overused
and sick on consolation
they warmed themselves with harm.

I will lay me down on the table
in the cabin of a boat.

thirst
at my seam.

Write muscle on my legs.

I’m a doll sleeping
on the table.

Mend me with a needle
and hold me where I’m worn. 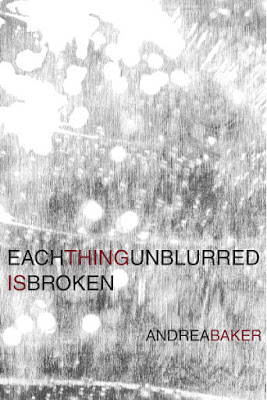 In the interview included in the press release to her new poetry title, Each Thing Unblurred is Broken (Oakland CA: Omnidawn, 2015), New York City poet and arts and antiques appraiser Andrea Baker writes that “My writing practice consists of crafting something out of resonate bits of image and thought. It isn’t linear. I have globs, and the reason to bring them together is to sculpt a frame to hold the globs. And once it’s held, I get to see what shape was made. I can only know the shape by making the shape. And I need to know the shape, so I write.” Referring to the book’s title, she adds: “I can’t even imagine the book without the title. It’s the book’s process, while also being its realization.” The author of the forthcoming Famous Rapes (Water Street Press, 2016), “a paper and packing tape constructed not-quite-graphic-novel about the depiction of sexual assault from Mesopotamia to the present day,” and Like Wind Loves a Window (Slope, 2005), Baker’s Each Thing Unblurred is Broken is a book composed of short lyrics that occasionally feel collaged from smaller fragments (as she suggests in her interview), constructed into seven sections: “Disciples of Another Will,” “Gilda,” “Theology,” “True Poems about the River Go like This,” “Theology,” “Gilda” and “Experience is Nature.” Unlike the remaining sections, the second, fourth and sixth sections are built of short sequences, and the character “Gilda,” a holdover, Baker says in the interview, of her Like Wind Loves a Window, who battles everyone (including herself) against her own erosion (“she’s picking her flesh apart // muttering, ripen small birds to large”). The second of the “Gilda” section-poems include:

A forest of ash in her womb

she bathes
for her length to settle

while a flock of sheep
hold

in the frame
of the door
she is locking

she creates herself
malignant

Baker’s poems are painstakingly precise, exploring the use of fragment, voice, character and allusion, and constructing something very specific out of the scattered parts. Is the clarity that Baker’s poems seek one that causes the breaks, or one that simply reveals it? Possibly either, sometimes neither and occasionally both. The narrator(s) in her poems also push fiercely against a vast array of dissenters, violent impulses and brutality, as she writes in the poem “An Ordinary Evening”: “O! Leather. / I hate and arm // and scream when the thing I planned to kill / someone kills / before / I can.” Further on in the same interview, she writes:

This book is about attempts at realizing vague images from the periphery, which it also enacts.

Posted by rob mclennan at 8:31 AM
Labels: Andrea Baker, Omnidawn