It’s Thanksgiving and you are six years old. Your knee socks are pulled up over your kneecaps. Rusty, your Golden Retriever, is under the table and now and then you drop a piece of turkey on the floor for him. What you’d really like is a Tollhouse cookie or some muskmelon, cut into chunks. You think Rusty’s distended stomach is from eating too much, though in truth, he hardly eats at all. He won’t make it to Christmas and neither will your father. Everyone knows this but you. (“Cancer Arm”)

It might seem odd for a collection of short stories, and a second one at that, would be referred to as a “collected works,” but that is the argument for Denver, Colorado writer Kathy Fish’s Wild Life: Collected Works: From 2003-2018 (First Matter Press, 2018), a collection made up of stories that were published previously in small and far smaller collections. Following her first full-length collection, Together We Can Bury It (The Lit Pub, 2012) [see my review of such here], the stories in Wild Life: Collected Works: From 2003-2018 include pieces from that first collection, as well as from A Particular Feeling of Restlessness: Four Chapbooks of Short Fiction by Four Women (Rose Metal Press, 2008) and Rift, co-authored with Robert Vaughan (Unknown Press, 2015), as well as including a number of previously uncollected stories. There is something interesting about a first collection morphing, in part, into a later, second collection, which does, in fact, make the final result more of a “collected” than a stand-alone title, something Montreal poet Peter Van Toorn did as well, morphing the best parts of his poetry debut, In Guildenstern County (Lasalle QC: Delta Can Press, 1973), into his second and final collection, Mountain Tea (Toronto ON: McClelland and Stewart, 1984), which itself was reissued as Mountain Tea and Other Poems (Montreal QC: Vehicule Press, 2004). Aspart of a very short interview recently posted at Wigleaf, Fish speaks of the current collection:

SS: Your forthcoming book—Wild Life: Collected Works, 2003-2018—will gather over 15 years of stories. Will they be sequenced chronologically? What kind of changes do you see in your writing over that period?

KF: Thanks for asking about it, Sierra! The stories are not in chronological order. They are sequenced more or less thematically and in three separate sections of the book. And although they're gathered from 15 years of writing I was pretty selective. It's still a very slim volume!

I would say that my writing has gotten subjectively better over the years, but that there are still some early stories that I feel really proud of. And those are the ones that made the cut and are included in the collection. I don't think I have the objectivity to really look at my writing as a whole and say how it's changed. 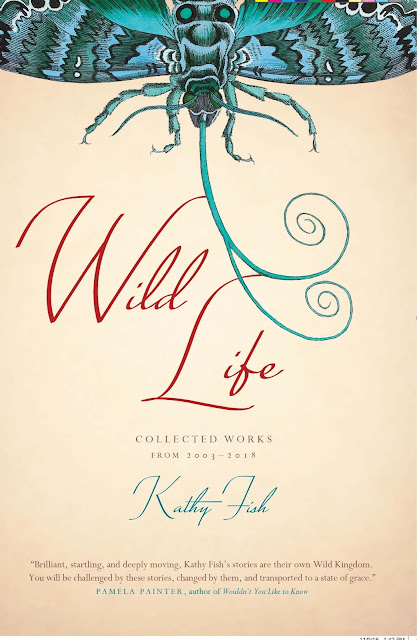 The strength of Fish’s work comes from a combination of insight, structural variety and sheer lyric precision, managing to crawl inside a range of first person points-of-view. Her stories explore a variety of shapes and styles, from the more straightforward to the postcard-esque, and one of the highlights for me is the quintet of short flash fictions grouped towards the end of the collection, “Five Micros”: “Betsy Becomes A Point of Interest,” “Betsy Becomes an Artist,” “Betsy Becomes the Subject of Meetings,” “Betsy Becomes a Pariah” and “Betsy Becomes,” with the equally-short story “Space Man” immediately following, right at the end of the collection, existing as a deceptively-placed coda-that-actually-isn’t (which was a bit confusing on first reading):

His girlfriend’s probably surfing somewhere in California right now. She is an astrophysicist and a veteran and a triathlete, but she’s never been up in space, like he is now, in a failing spacecraft. He knows it’s failing by the way the engine sounds, like a tennis shoe in a dryer, and also, by the way it’s spiraling out of control. Alone and out loud, Space Man employs the imperative: Eject! Eject! And girding himself for the unknown, he presses the button. Untethered, he waves to his ship as it cartwheels through space. As he, himself, cartwheels through space. He squinches his eyes shut. Jane would tell him not to be afraid, that this is an infinite universe and in an infinite universe all things are mathematically possible, even certain. And so he imagines his pretty girl, walking toward him on a boardwalk or even on Pluto or some star, a surfboard under her arm, saying, See Space Man? See?