We drink because the sun never sets or
because it never rises.
To find love, distorted by the empty bottle’s lens.
To hush the heart.
To soothe unwritten stories.
We drink the wounds of our parents
and of their parents
and theirs.
We drink to dull the throb of an abscessed tooth.
To stop our hands from shaking.
Because it’s happy hour.
We drink without even having to think about it,
because it feels good
to lose control,
feels like regaining it.
We drink to see the sky shift above us and
feel the earth wheel beneath our feet.
We drink our youth until it’s dry and then
we drink to all the ends.
Our wins and losses—
they taste the same.
To you who would judge us, and you who would join us
and you who have already gone. 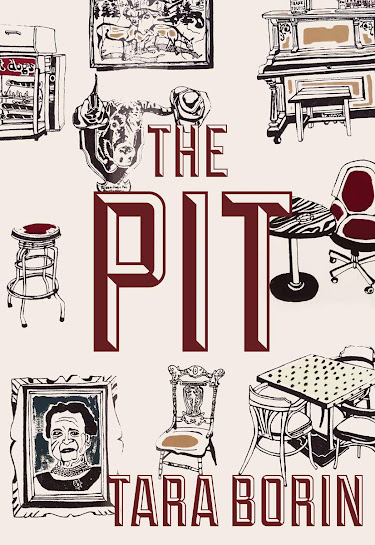 Dawson City, Yukon-based poet Tara Borin’s full-length poetry debut is The Pit (Gibsons BC: Nightwood Editions, 2021), a collection exploring the stories and setting of a local bar in “small-town, subarctic” space. Borin writes of “The Pit,” the oldest bar in the Yukon, run and patronized by locals and part of Dawson City’s Westminster Hotel. Borin’s The Pit stands in solidarity, one might say, with American poet Lea Graham’s From the Hotel Vernon (Co. Clare, Ireland: Salmon Poetry, 2019) [see my review of such here], a collection that wrote similar stories and mythologies around Worcester, Massachusetts’ Hotel Vernon, or even poems from the late Ottawa poet Patrick White’s elegy to the late artist, Benjamin Chee Chee, through The Benjamin Chee Chee Elegies (Burnstown ON: General Store Publishing House, 1992), a collection that wrote poems of Chee Chee, among other locales, at the tavern in Ottawa’s own Gilmour Hotel (a building that sat, formerly, at the north-east corner of the intersection and Bank Street at Gilmour). White’s poems also wrote of the shadows of addiction, something Borin explores repeatedly, such as the poem “DEAREST,” that ends: “I want to take him / home, feed him / anything other / than whisky and beer // but for now / that’s the only medicine / we know.” One could mention, also, Toronto poet Michael Holmes’ suite of prose poems to individual hotels, 21 Hotels (above/ground press, 1998), a collection reprinted in Groundswell: the best of above/ground press, 1993-2003 (Fredericton, NB: Broken Jaw Press, 2003), a collection that focused more on the image of hotels as sites for romantic liasons, both above board and below. And the, of course, there’s Al Purdy’s infamous “At the Quinte Hotel.” In The Pit, Borin writes the characters and experiences within what a hotel and associated tavern would hold in such a remote community, a combination of meeting point and last resort rolled into one; a point for community and communal events. “Here is where we find / the shortest distance / to each other:,” Borin writes, as part of the poem “DESIRE PATHS,” “bar top, schnaps sticky, / plywood dance floor / that feels like it could give / at any moment, / the house band a jukebox / onstage.” To introduce the collection:

The Westminster Hotel in Dawson City, Yukon, known locally as the Pit, has been in operation since the early 1900s. the Pit is the Yukon’s oldest and longest running bar and hotel, with sloping floors, shared bathrooms upstairs, and some of the most interesting characters you could ever hope to meet. Over the years, it’s inspired artwork in many different mediums (including gingerbread) and I hope it will continue to do so for years to come.

This book is for everyone who has found home at the Pit, for better and for worse.

The Pit is composed as a quintet of portrait-sections—“BEER PARLOUR,” “ROOMS FOR RENT,” “THE REGULARS,” “THE HARD STUFF” and “LAST CALL”—composing portraits of an array of characters in and around the space of the pub and hotel, whether short term or lifers, and everyone in between. As Borin writes as part of the poem “PORTRAIT OF THE RETIRED BARMAID”: “Snaps off the radio, her team // about to lose, / blows kisses to her cockatiel, / crest bobbing in his cage, // to the photos of her grandbabies / crowding the walls. // She slips into her old bomber jacket / with the bar’s faded pink logo / on the back.” Borin relays tales that could exist in any era, exploring a timelessness to such spaces, whether the 1960s, 1990s or more contemporary, writing tales of love and lost opportunities, sleazy attempts and comraderies, bar fights and addiction. As Borin’s narrator to the poem “HEARTBREAK HOTEL” asks: “How many heartbreaks / has this room held?” The collection might be well-populated, but examines predominantly solitary paths and solitary acts, dark stretches of addiction, loss and dead-end narratives, although all composed with a clear love for the space and its history, and of the characters collected within. One hopes the establishment is wise enough to provide copies of this book for sale in their gift nook. “You’ll gather our dust,” Borin writes, to end the poem “THE WALL,” writing:

in the buttery late-morning sun,
in the hush and glow of winter,

and every so often,
we’ll raise a glass,
speak your name,
share your story
so you’ll not
be forgotten
in time.