LETTER FROM A REAL TOWN: I

to the alien
tongues that ballooned
in speech but pruned
in the mouth
at the sight of tubs of lard
and pickled vegetables.

home. It leaves me
spitting up
on a dry mound
of gravel;

not quite
stiff as a grave,
but almost. 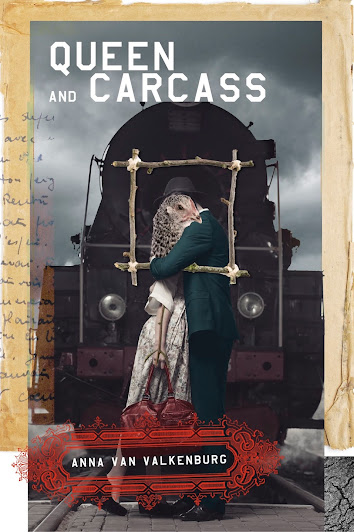 Anna Van Valkenburg’s full-length poetry debut is Queen and Carcass (Vancouver BC: Anvil Press, 2021), published as part of Stuart Ross’ imprint, A Feed Dog Book. Born in Konin, Poland and currently residing in Mississauga, Ontario, Van Valkenburg works an assemblage of surreal tales and retold myths, twisting together the real and fabled, from Slavic folklore to her own engagements and observations. “I’m the bone in the soup,” she writes, to close the poem “LITTLE RED IN LOVE,” “the dog’s dark feet / after rain; what remains / when the second letter of the alphabet / bites the first while waiting its turn, / and the mother throws a scowl / like How could you ever think / you could talk to a wolf / and get away with it?” She works through unexpected corners of her own childhood library of references, from Grimm’s fairytales and Snow White to Baba Yaga. “A town is a tin of children / in an ocean.” she tells us, as part of “THE IMAGINARY TOWN OF GRIMM.” Further on in the same piece, she writes: “An ocean is an island. That’s a choice.”

What is curious, also, are her adaptations and responses to works by writers including Valzyna Mort, Venus Khoury-Ghata, Ruth Stone, Bertolt Brecht and Adam Zagajewski, presenting her own shift and stretches across others’ canvas-boards. One could suggest the entire collection is built of poems composed from external jumping-off points, from artwork to writing to folklore, as Van Valkenburg breathes new perspectives out of and beyond already-familiar moments. “What’s in a carnival,” she asks, to end the poem “BRUEGEL’S LENT SPEAKS TO CARNIVAL,” responding to the 1559 painting by Pieter Bruegel the Elder, “The Fight Between Carnival and Lent,” “if not a prelude / to death? You forgot where it came from, / but they haven’t, and when they remind you // about the Creator, you will find / your hands in the dustpan, you will / teach them what it means to / force life to crawl out from its steel mother.” She works a curious blend of wistful storytelling and brutal truths, surreal takes with terrifying action, akin to fables themselves, writing dark tales of origins and forgotten lore, hidden just below the surface. Old ideas are hard to kill, after all, and sit below the skin of much of our forgotten truths, long-held beliefs and unacknowledged fears. “A library / in a language / no one can read.” she writes, to close the short poem “CULTURE.” Van Valkenburg writes of what is possible and what is impossible, and what should be equally approached with wonder, and fear. Or the end of the poem “BINOCULARS,” that reads:

I wanted to cool off in the shower,
and found a cockroach on my towel.
Aunt Basia washed it down the sink with scalding water
and stunned, I wondered, will it come back
up? It won’t, it won’t, she said,
only people do that.