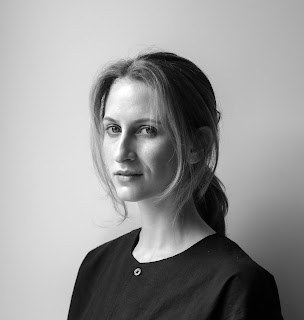 Zoë Hitzig is the author of Mezzanine (Ecco, 2020). Her poems have appeared in The New Yorker, Lana Turner, Harper's, Paris Review, London Review of Books and elsewhere. Currently pursuing a PhD in economics at Harvard, she lives in Somerville, Massachusetts.

1 - How did your first book change your life? How does your most recent work compare to your previous? How does it feel different?
My first book has improved my posture. Chin up. Shoulders back. I can look people in the eye now and say “I’m a poet.”

2 - How did you come to poetry first, as opposed to, say, fiction or non-fiction?
I’m bored by plot and narrative. I find a lot of fiction and non-fiction uncomfortably didactic. So I have a fear that if I were to write narratives, I’d be dragging a stubborn reader around on a leash as if on a guided tour through some kind of dreadful museum of my own inventions. I’d rather turn on the light in a Room of Requirement and invite a reader to explore it with me. That’s poetry.

3 - How long does it take to start any particular writing project? Does your writing initially come quickly, or is it a slow process? Do first drafts appear looking close to their final shape, or does your work come out of copious notes?
Some of my best poems came out in a sneeze. Those are gifts. But most of the time I write and revise, obsessively, usually late at night, over many months. Some poems absorb other poems, like hungry amoebae. Others are concatenations of failed ideas that actually succeed when strung together. Others grow and grow and grow over many months only to be cut down to a few lines in a single stroke, like Nasdaq during the dotcom bubble.

4 - Where does a poem usually begin for you? Are you an author of short pieces that end up combining into a larger project, or are you working on a "book" from the very beginning?
A poem usually begins with an image or phrase. But there have been a few deliberately conceived projects. For example, Mezzanine contains a few poems from a project entirely centered on objects used as evidence in wrongful convictions. Also, the initial draft of Mezzanine contained a bevy of poems from a project called Fragments from the Imagined Epic––most of them were cut from the final manuscript. Those poems started as dreams. I dreamt about an epic poem about famous warplanes in history. Then I dreamt about an epic poem about the secretive military operations that led to the development of famous warplanes in history. Then, I dreamt about an epic about the Island of Yap in Micronesia. In all of these cases, I didn’t want to write the epic because I didn't feel qualified, and felt that the epic already existed somewhere out there. So I wrote down some fragments. From the imagined epics.

5 - Are public readings part of or counter to your creative process? Are you the sort of writer who enjoys doing readings?
I love attending readings. I love being surrounded by poetry people, people who are willing to walk into a room of strangers emotionally naked, having checked their cloak of cynicism at the door. I don’t know what I think about giving readings. I’m in a strange position where I’ve given more readings in the zoomscapes than in person––my debut book tour was scheduled for the inauspicious summer of 2020.

7 – What do you see the current role of the writer being in larger culture? Does s/he even have one? What do you think the role of the writer should be?
This question reminds me of a quote from Renata Adler’s Speedboat: “That 'writers write' is meant to be self-evident. People like to say it. I find it is hardly ever true. Writers rant. Writers phone. Writers sleep. I have met very few writers who write at all.”

8 - Do you find the process of working with an outside editor difficult or essential (or both)?
My most important editors are my friends. They are essential.

9 - What is the best piece of advice you've heard (not necessarily given to you directly)?
The 10th rule in “10 Rules for Students and Teachers” by Sister Corita Kent (popularized by John Cage): “We are breaking all of the rules. Even our own rules. And how do we do that? By leaving plenty of room for X quantities.”

10 - How easy has it been for you to move between genres (poetry to critical prose)? What do you see as the appeal?
Different kinds of writing require different kinds of coherence. My favorite thing about writing prose is that it’s much easier for me to cut corners, and just get it done. Poetry doesn’t let me take shortcuts.

11 - What kind of writing routine do you tend to keep, or do you even have one? How does a typical day (for you) begin?
… “routine”?  I’m a nightmare in the morning. I’m at my best in the evenings. So I try to structure my day to give the evening to my current priorities and leave the morning for my current non-priorities. But even that sham routine is hard for me to stick to.

12 - When your writing gets stalled, where do you turn or return for (for lack of a better word) inspiration?
I rarely get stalled––I’m lucky when I manage to find time to write. And then when I find that time, especially lately, I’m overwhelmed by how many things I want to work on.

13 - What fragrance reminds you of home?
Dog pee and bagels & lox.

14 - David W. McFadden once said that books come from books, but are there any other forms that influence your work, whether nature, music, science or visual art?
I often try to read about new discoveries in mathematics. I rarely understand the discoveries––there are several scrims of abstraction between me and the research frontier in, say, algebraic topology––but just trying to grasp these discoveries serves a reminder to be ambitious with poetry. Mathematicians create entire worlds and logical systems with just a few symbols on a page. Poets have access to a much wider vocabulary, we should aim to build worlds and logics that are as rich and vivid as our toolkit allows.

15 - What other writers or writings are important for your work, or simply your life outside of your work?
There are too many to name! Zbigniew Herbert is probably the poet who was most steadily at my side during the making of Mezzanine. Many of my closest friends are writers––I cannot overstate the importance of their work in my life.

16 - What would you like to do that you haven't yet done?
I would like to write many more books of poetry and the lyrics to a mediocre pop song.

17 - If you could pick any other occupation to attempt, what would it be? Or, alternately, what do you think you would have ended up doing had you not been a writer?
I would have loved to be an astronaut. When I feel like things are going poorly in my work I look at job openings on the International Space Station. I’m not qualified.

18 - What made you write, as opposed to doing something else?
Unlike most other things, writing is best done alone. And I like being alone.

19 - What was the last great book you read? What was the last great film?
I have been working my way through an anthology of 20th century Hungarian poets published by Bloodaxe and edited by George Szirtes and George Gömöri. It’s astonishing. I’ve also been dipping in and out of a new selection of Wanda Coleman’s poems, Wicked Enchantment. She’s a genius. I watch Tarkovsky’s Mirror when the immediate future is looking bleak––I’ve watched it a lot lately.

20 - What are you currently working on?
I’m writing a long poem, which will probably end up being the backbone of the second book of poems. It is about the aftermath of a mysterious apocalyptic event. I am also writing a doctoral dissertation in microeconomic theory, which I try bring up only when it’s time to end the conversation.