the plot so far 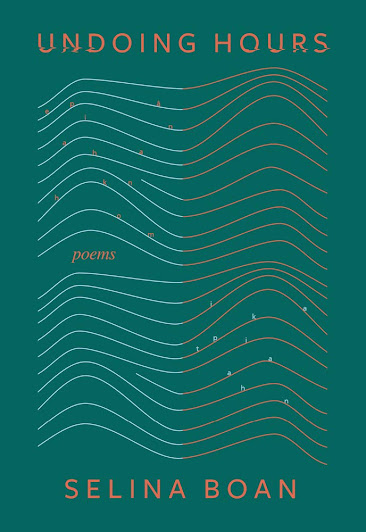 Vancouver-based poet and editor Selina Boan’s full-length debut is Undoing Hours (Gibsons BC: Nightwood Editions, 2021), a collection of lyrics on the intimate, the small and the immediate, writing on the “ways we undo, inherit, reclaim and (re)learn. Having grown up disconnected from her father’s family and community, Boan turns to language as one way to challenge the impact of assimilation politics and colonization on her own being and on the landscape she inhabits.” Writing in a blend of prose poems and traditional lyrics, often within the same poems, Boan’s phrases and sentences are exploratory, working to cover the ground of what she knows and remembers, attempting to work her way into what she wishes to discover and connect into, and just how much she might not realize she has already absorbed. As she writes to open the poem “my mother’s oracle card said”: “the answer is simple. take your mess, / bless it and start over.” There is a rawness to these poems; a vulnerability, writing carefully and openly, as best as possible, to reap whatever benefit might be possible. “i’ll admit,” she writes, as part of the poem “email drafts to nohtâwiy,” “i’ve been afraid to write. so here is my deflection, for / everyone to read.”

As part of an interview conducted around the National Magazine Awards, posted January 2018, Boan discusses the manuscript, which was still very much a work-in-progress: “In my work, I keep returning to and circling ideas around identity, around settler responsibility, around womanhood, and language learning.”