Amorak Huey, Dad Jokes From Late in the Patriarchy

He moves through dark woods, checking traps & splitting logs. The work of keeping a family alive against another long winter. The cruelty needed to survive & no more; the particular gracelessness of a thin man with a large beard. A caught fox screams. Or a rabbit. Because blood needs blood. Because a man has a duty. My father moves, then moves again. America is fond of its rootless men. I walk beside. I carry a bow & arrow. I do not know how to shoot. He will not ask for help. He teaches me the names of blackbirds, the songs of trees. How to peel back bark & tap the sugar beneath. I imagine such sweetness, a cold wind. We stand & press on in the deepening snow. 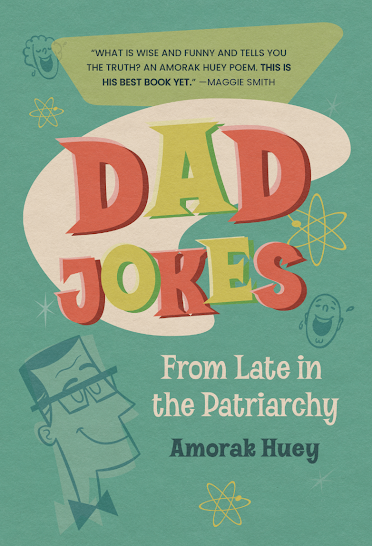 The fourth full-length poetry title by Michigan poet Amorak Huey is Dad Jokes From Late in the Patriarchy (Knoxville TN: Sundress Publications, 2021), a collection of first-person lyric narratives or monologues that explore notions of fatherhood, childhood and masculinity. Huey works through personal history and pop culture writing notions of television and movie fathers from the 1960s and 70s to his own father, and then to his own sense of fatherhood, exploring expectation, cultural presentation and the confusions that can exist within the collisions between. As he writes to close the poem “To the Dads at Buffalo Wild Wings Watching the / Tigers Game on a Monday Afternoon in April,” “On our separate drives home / we will chew gum / to cleanse our breath; / we will forget to pick up / the dry cleaning. / We lose track of the score, / blame the bullpen, / over-tip the servers, / we expect a kind / of sympathy we have not / earned. This is what it looks like / to have inherited the earth.” Through reading these poems, I think back to cultural depictions of the North American father as hapless, distant and incapable of accessing emotions, even to my own irritations at the more-recent Eddie Murphy film Daddy Day Care (2003); the limitations to how fathers are depicted, an idea that far too many latch onto as how one is supposed to act, and refusing to move beyond those boundaries.

Huey writes on fatherhood and boyhood, and the cultural weight so often put upon everyone, in terms of performing gender, from parents to media to classmates, falling exactly into the pitfalls of such limitations. “I cannot believe how stupid I am. I cannot believe,” he writes, to close the poem “Looking at Men,” “I’m more than halfway through with this life / & still molded out of ninth-grade humiliations. / I do not dare to admit weakness. I cannot / tell the truth about want. I am not / this body. I am not this sex. I am not / strong enough to be anything else.”

I find it interesting the ways in which Huey writes through such histories, including notions of nostalgia, something he discusses as part of an interview conducted by Frances Donovan and posted at Garden of Words on April 21, 2020. Discussing his third collection, Boom Box (Sundress Publications, 2019), Huey responds:

Nostalgia has always been one of the driving forces of my writing, as I assume it probably is for many people. And I’ve definitely always been interested in using the language of pop culture — whether it’s movies, music, literature, television, sports, whatever — in my poetry. My first collection has a lot of that in it. At some point, I realized that I had been mining this territory (high school, hair metal) a lot, and that’s when I assembled this group of poems into Boom Box. I tend to work in poems, not in projects, which causes problems for me when it’s time to shape what I’ve written into a book, so the threads and links between these poems are something that I discovered after I written them.

Huey steers clear of toxicity, but leans into a masculinity that defines as distant, sports-minded and friendly enough, those fathers who might favour the “dad joke,” but be unable to hold conversation beyond the weather, work or statistics. The closest he comes is through the poem “FMK,” that opens: “You can leave me & I will not kill you. / That this needs to be said is insane / but I am a man, & this is the world.” Huey attempts to shift, and even open, the narrative of what is possible for men, and for fathers; of what is possible in the ways in which we treat each other, and simply exist. “I have so much to live up to.” he writes, as part of “The Seventh Anniversary is Salt & I Do Not Know/ the Gift for That,” later on, ending the poem: “I am probably still not myself— / one of my sons, or both, or some / version of myself I’ve invented / from television characters / & game show hosts. I am so tired / & still I have nothing to show / for all the hours of my life. / We are miles inland but the air / is dense with saltwater, our / tongues slick with brine.”