The night I heard Trixie Mattel tell a rape joke
my rapist was outed on Twitter
& how do you follow that act.

Trixie says: I miss the days
when drag queens could be mean,
like if you left a show early, a queen
could just heckle you, something like
I hope you get raped.
& the whole room erupts. (“OUTINGS”) 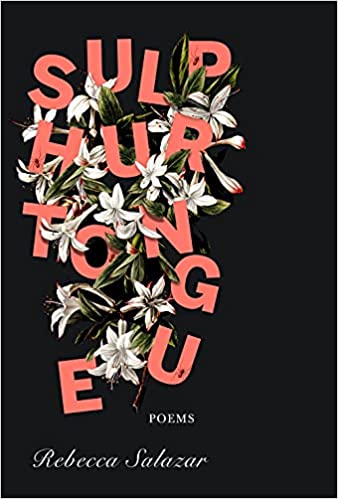 Canadian poet and editor Rebecca Salazar’s long awaited debut is sulphurtongue (Toronto ON: McClelland and Stewart, 2021), a collection of curt, narrative lyrics that punch and push, displaying a lyric heft that shows itself through the density of her lines and the stories she chooses to tell. “I can’t knock fucking,” she writes, to open the poem “i. Je vous salue Marie,” the first poem in the three-part “VIRGINS,” “as a Catholic—as concept, I mean? My body is matter / for others. When he first wheedles, / can good girls reeeeally say no, / what he means is, can I stick it / up that schoolgirl uniform, / erotic polyester sack, ill-fitting / except where it matters.” Her poems have dark undertone, populated by geography, dead bodies, sexual violence and homophobia. “daddy when you say you can’t imagine / what two girls could do in bed,” she writes, to open “DADDY ISSUES,” “i know you mean what is the sex / without the p-in-v and i cannot / help feeling sorry for my mother [.]”

Writing dark explorations of gender and queerness, illness and trauma, homophones and synaesthesia, Salazar narrates on and around trauma, and the possibilities of moving beyond trauma in poems that haven’t managed to get there yet, but examine the ongoingness of leaving such trauma behind. The poems that make up sulphertongue give the sense that Salazar is feeling her way through a variety of forms and structures, although the stronger pieces emerge from a pared-down language, such as the three-part prose poem “A DEATH PRECEDED BY THREE AUGURIES,” the first of which reads: “In your last week, when they say you might stop eating, you eat / twenty-seven watermelons whole. The brothers ogle: / pink juice parsing the lines of your face and depositing / carbuncles, sugar gems down your cracked lips and chin, / like the starched stars that web across summer fruit rinds.” Other poems, such as the sequence “COUNTDOWN,” display a comparative looseness, allowing the rhythms and spacings a bit more bounce along the lyric. “Mother, when you sprout me,” she writes, “your first, / you trace where the next stones will fall.” Really, the poems that really strike are the handful of ghazals that make up the third, and penultimate, section. “You are oversized,” she writes, to close the poem “LOVEY-DOVEY,” “rose-tinted glasses. / I ache only to love everything.” These, I would say, are poems tight enough that any bird, to paraphrase Don McKay, might trust to light upon.

Nab a snatch of romance as you pass: her bouquet
of wagging pistils, her elastic, tooth-marked garter.

Overheard: “Pussycat Dolls played at my high school!”
Overheard: “It wasn’t pleasure, it was routine.”

Posted by rob mclennan at 8:31 AM
Labels: McClelland and Stewart, Rebecca Salazar