There’s a hole in the wall, but for this to be the case, the wall had to exist before the hole – as hearing. Hearing occurs at the beginning – rowing at the wall. But (again) rowing is ahead of the wall. And so on. I want to say it (rowing hearing wall) is ‘saved for the beginning,’ but that would be a future beginning and thus not correspond to what I intuit as ‘bliss,’ which is real incipience, of an entirely new thing, something unanticipated. In the realm of hearing, anticipation does, of course, occur – there is a ‘waiting to hear,’ for example, of a report which is to be given to a person in doubt. But at the moment of actually hearing it, whether the report is ‘good’ or ‘bad,’ the hearing itself, as hearing, occurs in a moment of absolute freedom, utter deracination, floating – ‘rowing wall.’ 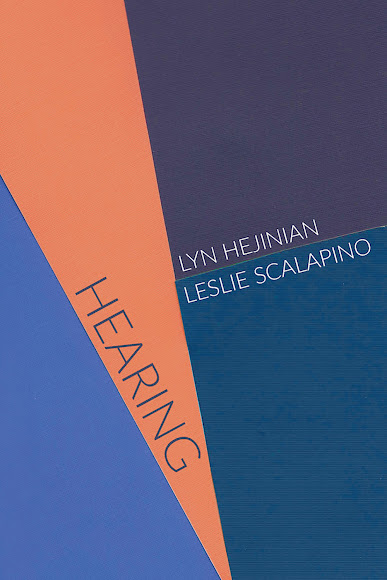 The second in a planned but unrealized quintuplet of poetry titles is Lyn Hejinian and the late Leslie Scalapino’s (1947-2010) poetry collaboration, Hearing (Litmus Press, 2021). Following the collaborative Sight (Washington DC: Edge Books, 1999), this current volume had aimed to be part of a series of volumes the two poets had hoped to complete, with each volume centred around another of the senses. Hearing includes an introduction by Hejinian, and afterwards by both Judith Goldman and Michael Cross. It was poet, editor and critic Cross [see my review of his recently-published chapbook-length interview with Scalapino here] who originally discovered and salvaged the manuscript from Scalapino’s archive at the University of California San Diego, subsequently working through and comparing the literary archives of both poets to determine what might be the “final” version of the collection, allowing the collection to shift from a potential footnote into finished, published form.

Given this is one of the final, if not the final, possible volume of new work by the late beloved Bay Area poet Leslie Scalapino, seeing three pieces included that discuss the work within seems both a gift and a rarity. As Buffalo, New York poet and critic Judith Goldman writes as part of her critical afterword, “Hearing Hearing”: “As title and work, Hearing invites us to think of hearing as the most capacious rubric for all our encounters with sound (whether by turns more or less conscious, overcoded, embodied), and as a stripped-down, minor term opposed to its more attentive partner “listening”—hearing as sound catching us prior to cognizance, sound as ground versus figure. Indeed, Hearing asks us to consider the many ways this distinction is embedded in our culture: hearing is involuntary, listening is intentional and voluntary; hearing registers ambient sound, listening sonic events; hearing identifies sound as index, listening is hermeneutic, discerning meaning, vouloir-dire; hearing involves affect, listening concepts.”

As Hejinian writes in her introduction: “Leslie used the term ‘continual conceptual rebellion’ to characterize what she called ‘wrecking your mind.’ I think that the latter phrase was something that Leslie’s friend the poet Philip Whalen spoke of aspiring to in his writing. He was, apparently, speaking not of Leslie’s mind but of the mind of his readers and, more important, of his own. I have written about this elsewhere and won’t belabor the idea here. My point is that the notion of ‘continual conceptual rebellion’ (a notion that became something of a north star for me) and the practice of ‘outrunning’ ideologies (including one’s own)—i.e. ‘wrecking your mind’—was vey much implicit in the ways that Leslie and I responded to each other’s additions to Hearing (and to Sight before it).”

The brief time, which is one’ s own lifetime, and the expanded moment of the falconer tramping through the red-rust fields – is in the middle for a long time of someone else’s ‘experience’ within one’s own very brief time (of being alive at all) – both – in which everything is heard, such as birds, separately from when it is being seen. While there? So the falconer is heard walking but since it's a memory that it occurred, one’s hearing is separate from seeing the place. Even in the falcon’s gliding’s long present-time. One’s long moment in the middle gives one the sense of hearing and seeing as if together – that’s why it’s so long. The gliding’s separate from oneself as if it’s a middle by being a motion that’s silent. But it isn’ t really silent, then. getting old – memory of hearing – that’s the only time there.

Theirs is a fascinating kind of call-and-response through the poems in Hearing, each short single-stanza lyric burst including author initials, so one doesn’t lose track of who composed which, from two poets deeply engaged with language, listening and experimentation. The crediting of each individual author is something I find interesting, suggesting the collection less a collaboration-per-se than a conversation in poetic form. This is a lyric through which each poet is responding to the other, akin to what Canadian poets and married couple Kim Maltman and Roo Borson did in their own conversation through lyric, the poetry title The Transparence of November / Snow (Kingston ON: Quarry Press, 1985). In Hearing, there is something lovely about a collection that exists as such a conversation, especially between two highly accomplished poets who happen to also be close friends, as though we are being allowed to listen in on, or even overhear, a conversation that might otherwise have been privately spoken. As Michael Cross’ afterword, “Ruminations on the Provenance of a (Nearly) Lost Collaboration” ends:

From our conversations, there is no question that Leslie wanted to see this manuscript in print and that she was proud of her collaborative work with Hejinian (a writer and friend she greatly admired). Had she lived, the two collaborators might have found occasion to continue and would have, at the very least, revised the project together in person; however, given the circumstances, this publication captures this collaboration at its aphelion, the denouement of one of its possible afterlives. In order to allay our loss, I tend to imagine some placatory parallel universe, some peaceable pocket of time in which Leslie dodged the terrible pancreatic cancer that took her life: in this version of reality, perhaps readers will enjoy the privilege of witnessing these poets ruminate on all five senses; for our part, however, in which we mourn the loss of one of our true masters, sight and sound must suffice.