My son, too young, toddles to the two-
button remote: one to move the T-rex
forward, one to shake its skull and summon up
its patent-pending roar. He roars himself,
defiant, then presses button two
and knows, or seems to know, the noise
arises from his throat and fingers, nowhere else,
so isn’t shocked when it arrives
but once the sound has journeyed
thoroughly inside, wide-eyed
he steps back once or twice
where buffer-loved and terror-blind
he lurches his fear forward one more time
and jabs and jabs the jagged jaws alive. 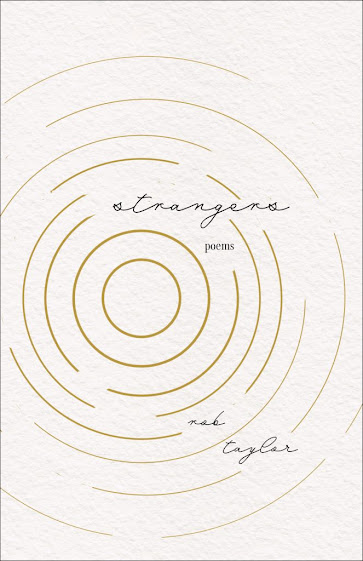 Vancouver poet Rob Taylor’s latest is Strangers (Windsor ON: Biblioasis, 2021), a book that self-describes as “Mapping the poet’s life from age three until his son’s third year [.]” As he writes in the poem “What Wisdom’s in Wisdom / Recorded?”: “Our son’s a torture. He won’t rest. / We ask him what a wave says and too fast / his crash falters back to the shell of its birth. // Somewhere a deer in the clearing / seeks a human eye. / I haven’t slept well in over a year.” Just you wait, I’m sure, Taylor’s current-self might say to his then-self. In Strangers, Taylor’s lyrics present themselves as roughly sketched-out meditations in carved forms, providing a sense of both immediacy and craft, suggesting a great deal of work went into accomplishing such ease. “When I rediscovered you / we were both prodigals’ fathers / grieving our sons,” he writes, to close out “Love, fidelity, etc.,” “though it was my hand, of course, / reached out in welcome, / my mouth that rushed the story to my wife. // Yes, you arrived with my marriage. / You’ll go at the end, off to some necklace or pouch // or you’ll linger years in the earth / until all you encircle is earth // and a scavenger prospects you up, / as I did, from the muck. / It wasn’t much. I was in the field. / I knelt. My hands were bare.”

Taylor is a storyteller, and Strangers is a book of shifts, and attempting to understand those shifts from the inside; what they represent, what they bring up, what they might suggest of where these shifts might lead. “We can hardly hint at you,” he writes, to open “Ultrasound,” “so tomorrow we’ll send / the restless Doppler out / and hope to find inside / an awareness of our senses / cannot fathom this night, / like your skull peeling back / to grey matter—your life / and the death inside it, / squirming from the camera.” The poems exude grief and joy, enthusiasm and fear; at times, simultaneously, as though an emotional well has found new depths. When one first begins to have children, parallels present themselves quickly, offering opportunities to reevaluate one’s own childhood, often for the first time, and in new and unexpected ways. And yet, this is a book of multiple transitions, repeatedly asking how one might get there from here, and wondering how one might survive. “I have come / from visiting / my brother,” he writes, as part of “Transatlantic,” “disease piled / snug on him / like cargo / in a transatlantic / hold.” I also very much appreciate the suite of ten poems underneath the “At Roblin Lake” title/banner, also, openly composed (or at least begun, certainly) during his time at the infamous residency at the Al Purdy A-Frame: “And yes of course / I thought of Purdy’s piled blood / and my father’s ashes, both / back in Vancouver— / the blood now some novel / atomic arrangement, some dirt / or flower; the ashes in their urn / in my mother’s closet, twenty-two years / awaiting transformation.” (“Untitled”).

Posted by rob mclennan at 8:31 AM
Labels: Biblioasis, Rob Taylor