Mermaid, myth, bloom of breast and carpenter: always, Helen, you drown, lose your shiny peel of memory, mark frame and frame by incision. You drown and I carve slabs of wax. You fast before men who will have you in this house, men peering over their glasses of beautiful, beautiful.

I write from the belly of the I, the breaking of the fan. I read and need it to fold me. the only name for this is palimpsest, to go over the tangle again and again.

In dreams I carry women on my back. 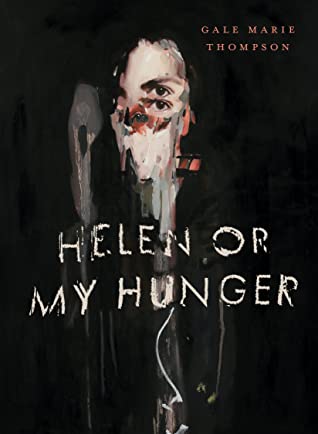 North Georgia poet and editor Gale Marie Thompson’s second full-length poetry title, following Soldier On (North Adams MA: Tupelo Press, 2015), is Helen Or My Hunger (Portland OR: YesYes Books, 2020), a lyric study of language and beauty, writing through the threads of multiple and mythical Helens, from H.D. to Homer. “Mistaking wandering / for upwards,” she writes, as part of the opening section, “Rehearsing in advance / this disappearance [.]” Thompson digs into Helen, rendering her both real and mythological, finding the two poles of her possibility and composing between them. As she writes: “How do I decipher my own name / in its largeness?”

Helen Or My Hunger is structured in six sections, six suites, of untitled lyrics and prose, sweeps of sentences and line-breaks that join together into a single body. “What we know about Helen is her sex,” Thompson writes, as part of the opening of the second section, “her little form. A body of nouns. / Irrepressible. She has unraveled to be yellow-haired, white-armed; the / machine of Helen always was. What we know about the machine of Helen / is being cited and cited and what kind of warm stone do I hold now?” Thompson re-tells and twists the story of Helen of Troy, engages with H.D.’s reclamation of Helen, and all the Helens around, in-between and outside the boundaries, allowing the shift between knowing an unknowing to shimmer, collude and ride out in a lyric sweep, a suite of moments that become both clearer and more hidden. In “Where Our Memories Settle: An Interview with Gale Marie Thompson,” an interview conducted by Lindsay Tigue for New Orleans Review around Soldier On, Thompson discusses Helen or My Hunger, then still a work-in-progress:

Right now I’m finishing up a manuscript called Helen or My Hunger and it includes a lot of my thoughts on these memory texts—thinking about how we remember, who we remember, how those memories get replayed, and how that replaying affects our living experience. My book began as a conversation with H.D.’s Helen in Egypt, a feminist epic that attempts to re-see and rewrite the myth of Helen of Troy—“Hated Helen,” as she calls her. H.D.’s book adds onto Stesichorus’s theory that Helen never was in Troy (to be the catalyst for the Trojan War), but was in Egypt the whole time—that instead an eidolon, or phantom, took her place in Troy.

Unlike Helen in Egypt, my book is writing not as Helen but rather to Helen—knowing that in fact there really is no Helen, that I’m writing to a myth of a myth, an echo. I’m writing to that Eidolon. I’m also using this to think about the feminine long poem, myth-making and storytelling, and I think a lot about memory. I talk about wax tablets a lot.

Thompson’s poems group and gather into a narrative thread as both suite and study, citing multiple aspects of Helen or even multiple Helens. “To write a sentence is exhausting. I hold it in.” she writes, as part of the first section. Might there be echoes here of that old Kids in the Hall sequence, “Thirty Helens Agree”? Whether they agree or not, there was always more than one Helen. “Now I am expected to sing,” she writes, to close out the first section, “This story is Greek / I should be bouncing my voice / I should be between / two or three rooms, my oaken oars / half-filled with sand / I should be stiffening / with a terrible closeness / What I remember in place of / The unpicturable / I lean in to it [.]”

In class I tell my students that we must define our terms, that we must use precision in our language, or else it doesn’t reach another person. In truth, one of the most telling signs that my depression is returning is that I become both bored and distrustful of poetry, of words in general. It seems so manipulative, I think, steering words around just to get other people to feel things. I am unaffected by a poet’s decision to put one word in front of another word; this is just a trick.

I have seen what the flag of green language can do, am angry at my own gullibility. I find myself inside of the knowledge that language is power and that I am unpracticed in both power and its resistance. I am surviving, but in order to do so I have detached myself from the needs of the world and even of my own body, and now I am afraid I have no way to access it.

I am surviving but cannot find the shape of my own urgencies.

What is it to depend on memory but give my own so little value? To codify but delete the code? Woolf writes, It is not a new cry, it is a very old cry.