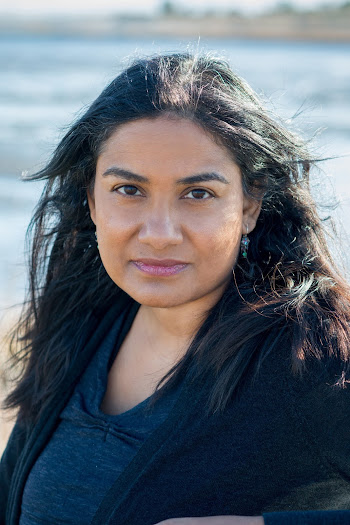 Anita Felicelli is the author of CHIMERICA: A NOVEL and the story story collection LOVE SONGS FOR A LOST CONTINENT. CHIMERICA appeared on The Millions’ Most Anticipated: The Great Second Half of 2019 Book Preview, Fiction Advocate’s What to Read in September, and Ms. Magazine’s Hidden Gems of 2019. It was an Alta Fiction Pick for Winter 2020. LOVE SONGS won the 2016 Mary Roberts Rinehart Award.

Anita’s work has been nominated for Pushcart Prizes, won Greater Bay Area Journalism awards, placed as a finalist in several Glimmer Train contests, and received a Puffin Foundation grant. She graduated from UC Berkeley and UC Berkeley School of Law. She grew up in the San Francisco Bay Area, where she lives with her spouse and three children.

1 - How did your first book change your life? How does your most recent work compare to your previous? How does it feel different?
I wrote Chimerica before I wrote most of the stories in Love Songs for a Lost Continent. They are very different books. Love Songs is a postcolonial short story collection about memory, love, and loss. Many of the stories ask who can reinvent themselves and what the limits of that are. Chimerica is a postmodern novel, a surrealist legal thriller, that experiments with found texts and is a little provocative, mostly because of the point-of-view character. I think that observing how readers received Love Songs, a more understated and formally conventional text, made me acutely conscious of the potential pitfalls of writing about another culture. Greater consciousness is not a bad thing, but it's changed how I approach certain problems in my current work-in-progress. Chimerica is a far bolder and more audacious text by design— I didn't know how it would be received when I wrote it back in 2010. I wrote it a little bit more freely than anything I've written since.

2 - How did you come to fiction first, as opposed to, say, poetry or nonfiction?
I've been writing all three my whole life, though I saw myself as a fiction writer first. I came to fiction with the greatest dedication because I read more of it than anything else and all the time. It got to the point that my father worried about my excessiveness and instituted a rule that for every fiction book I checked out from the library, I had to also check out a nonfiction book. I had a high propensity for make-believe and stories as a child. I used to play games about imaginary lands and make up stories with my closest friends—no other endeavor has felt so natural to me.

3 - How long does it take to start any particular writing project? Does your writing initially come quickly, or is it a slow process? Do first drafts appear looking close to their final shape, or does your work come out of copious notes?
My work comes out of notes made over years and my first drafts are often very different from the final shape. A first draft typically comes very quickly because I often think about a story for a long time before writing it down. I'm thinking about stories while cooking, washing dishes, or doing other organizational or administrative tasks. However, every project is different and has its own needs and I try to honor those, whatever they are.

4 - Where does a work of prose usually begin for you? Are you an author of short pieces that end up combining into a larger project, or are you working on a "book" from the very beginning?
I start working on fiction when I become obsessed with the what-if of a potential real or theoretical conflict. I turn thoughts over and over until they coalesce into a story. Life is very short — I won't write about something if I can't get excited about it. At the point of obsession, I can usually tell whether I'm working with a large, complicated story that would best be served by a novel, or a smaller idea. I'm working —at least purportedly —on a book from the very beginning of my process at this point in my life. That wasn't always true. Chimerica started as a novel— the fourth novel I ever wrote—but I'd written two unpublished and failed different books about similar subjects prior to it, which is why I approached Chimerica knowing it would be a novel. But Love Songs for a Lost Continent includes stories from as far back as 1998 that I never considered might become part of a collection when I wrote them.

5 - Are public readings part of or counter to your creative process? Are you the sort of writer who enjoys doing readings?
I love talking to people about books, mine or other people's, and doing spontaneous Q&As. I don't necessarily like to give readings. I find the performative aspect potentially stressful.

6 - Do you have any theoretical concerns behind your writing? What kinds of questions are you trying to answer with your work? What do you even think the current questions are?
I do have theoretical concerns behind my work —my education was very theory-driven and I can't really leave it behind when I write — but those concerns vary dramatically from project to project. I don't consciously make decisions about what to be interested in. If I were to try to pull away from all of my projects and take a birds-eye view, I'd say that I'm repeatedly preoccupied by ambition, outcasts, nonconformists, social division, and how society's structure reinforces itself among ordinary people. The particular questions and themes of each book are different, though. Love Songs asks, for example, to what extent people are constrained by their identities and memories, and what happens when they try to reinvent themselves by crossing boundaries? My two current projects have themes of time, memory, love and mortality.

8 - Do you find the process of working with an outside editor difficult or essential (or both)?
It's essential to have an editor. Editors are a godsend—it's seriously amazing that they want to spend time on someone else's work of imagination. They do so much to improve and sharpen stories and novels.

9 - What is the best piece of advice you've heard (not necessarily given to you directly)?
I received some advice from Chris Abani years ago and I return to it again and again. He told me to take the long view of my writing career. When you take the long view, no one book is "it" and so you can always keep going with your work, even if you receive harsh criticism, no support, rejection, or come to believe you failed in a particular project.

10 - How easy has it been for you to move between genres (novel to short story to critical prose)? What do you see as the appeal?
I follow my interests at all times, whether I'm writing or reading. It's easy and natural to move between genres — I don't force anything when I write under my own name. There are sufficiently restrictive constraints on me in my ghostwriting for work and as a parent — and previously, as a litigator—that I can't spend what time is left over on things that aren't interesting to me. I think different types of stories call for different genres and voices. With enough practice, you have a fairly good idea of whether you have a novel, short story, or nonfiction on your hands.

11 - What kind of writing routine do you tend to keep, or do you even have one? How does a typical day (for you) begin?
In the past, I've written in the morning before the kids got up, or after they went to sleep. During the pandemic, my time is a bit of a mess. I'm snatching time here and there wherever I can, but mostly after my kids go to sleep or when they're playing peacefully or in the midst of screen time and it seems like I'm not going to have to mediate a quarrel.

12 - When your writing gets stalled, where do you turn or return for (for lack of a better word) inspiration?
I turn to art or music or other books on a regular basis. But far more often, I need to settle down, not get inspired. My mind is almost always in a state of excitement about something  — I'm intense and have far too many ideas at once. Baking or listening obsessively to certain albums helps relax me enough to get back to work in a more focused way. I think my imagination works better when I divert my focus to something other than the writing problem at hand, if that makes sense.

13 - What fragrance reminds you of home?
Spices like asafoetida, curry leaves, cinnamon, and cloves.

14 - David W. McFadden once said that books come from books, but are there any other forms that influence your work, whether nature, music, science or visual art?
Music and visual art strongly influence my work. I'm eclectic in my tastes, but I'm always looking at what musicians or artists are doing in terms of pattern or technique that I could somehow transform for use in my own work. For instance, I'm fascinated by cross-genre blending and sampling in hip-hop, and I think a lot about how similar effects might be achieved by blending genres in fiction. I'm also fascinated by symbolist and surrealist paintings, installations and found art, and I've borrowed techniques from those, too.

15 - What other writers or writings are important for your work, or simply your life outside of your work?
I read very widely so there are many, many writers who are important to my work for different (and sometimes competing) reasons. Some of these writers, just off the top of my head, are Elena Ferrante, Kelly Link, Helen Oyeyemi, Adolfo Bioy Casares, Gabriel Garcia Marquez, Arundhati Roy, Jonathan Lethem, Toni Morrison, Danzy Senna, Percival Everett, and Yoko Ogawa.

16 - What would you like to do that you haven't yet done?
I want to raise my small children to be kind, resourceful, and capable adults. I also hope to travel to Antarctica and Easter Island and I want to see the Northern Lights before I die.

17 - If you could pick any other occupation to attempt, what would it be? Or, alternately, what do you think you would have ended up doing had you not been a writer?
I've been a ghostwriter to support my fiction for ten years. I was a litigator for eight years before that. Before that, I had several different jobs —secretary, graphic designer, data entry worker, live-in nanny, and babysitter. The only thing I've done consistently in all that time was write fiction.

18 - What made you write, as opposed to doing something else?
It seems to surprise people, but I never really wanted to do anything else in a serious way. I studied law because it came easily to me and I thought I might make a social difference with regards to human rights or civil rights. I didn't get how difficult it is to get properly paid for this type of work in our society. And when I gave up on making a career out of social justice concerns, I underestimated how time-consuming and taxing it is to be a litigator. When I was young, I had an ambitious idea that I could do it all — write fiction, make a living as a lawyer, help change society, and also have children. I've had three of those, but not more than two at the same time.

20 - What are you currently working on?
I'm revising a novel and intermittently writing surreal short stories that revolve around the theme of time.