Soft Zipper, a fragmented anti-memoir which organizes a lifetime of vignettes and recollections around a resolutely objective, rather than subjective point of view, borrows a structure, and subtitles—Objects, Food, Rooms—from American modernist Gertrude Stein’s 1914 volume Tender Buttons. What Stein discovered in writing her prose poems (also while on holiday, but in Spain), was that space is a synthetic perception. We compose it retrospectively with glimpses, borrowings, visual and musical rhymes and puns, and the staccato movement of our attention. In Tender Buttons the domestic detritus assembled by early Cubists in their still life collages finds its way across into her prose poems, and becomes there a plastic field of syntactic experiment, “the rhythm of the visible world” as she later explained. Where Stein’s ear is playfully abstract, or at least abstracting, George’s sound sense is vernacular, keyed to the plain pleasures of familiar speech. William Carlos Williams, rather than Eric Satie, would be a sonic predecessor. Prose is a domestic production her. His spaces too are often fabricated and flesh out in accordance with the homely pleasure of touch. (Lisa Robertson, “Introduction: Button Kosmos”) 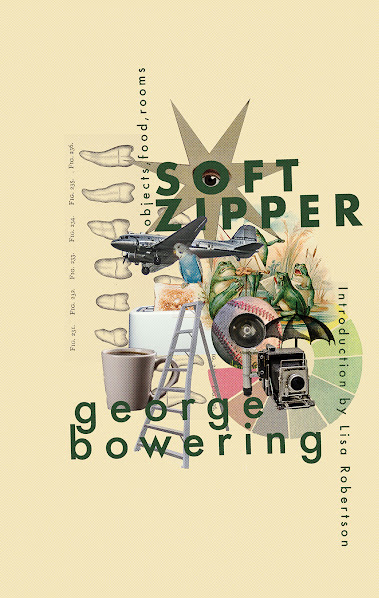 With more than one hundred trade books to his name, there isn’t much ground Vancouver writer George Bowering hasn’t already tread, so I’d been curious to read through the short prose recollections of his Soft Zipper (Vancouver BC: New Star Books, 2021). Soft Zipper works through, as Lisa Robertson explains in her introduction, a structural echo from Gertrude Stein, but one that could also be an echo of, say, the late London, Ontario artist Greg Curnoe’s own 1961 artwork, “Drawer full of stuff.” Bowering writes underneath individual subject-titles in three sections, from “TWO BOWLS” and “THE BONE” to “PICKY EATERS” and “WAITING ROOM.” There are elements, also, of his Autobiology (Vancouver BC: Georgia Straight Writing Supplement, 1972), composing similar memoir recollections through short blocks of prose, although without the structure of objects, food or rooms. It reminds, also, of Kingston writer Diane Schoemperlen, who composed her debut novel, In the Language of Love (1994), in one hundred chapters, each of which was titled and prompted by one of the one hundred words in the Standard Word Association Test. bpNichol began his novella, Still, which won the 3-day novel writing competition for 1983, by describing the objects in the room around him. For Nichol and Schoemperlen, these processes were used as jumping-off points for fiction. For Bowering, it is a curious way to produce a memoir, and an intriguing way to prompt memory, allowing that narrative leap from a word or a phrase to spark where that section might go. And, given the fifty years between compositions, it does exist as an interesting counterpoint to the pieces in Autobiology [reprinted as part of this recent selected]: how he writes his recollections of growing up in the Okanagan. Bowering is, of course, famous for having employed numerous writing strategies, or “baffles,” throughout the length and breadth of his work; structures determined before the first word is written, as a way of allowing the work to be a collaboration of sorts, between where his attention strays and the direction the writing itself suggests. As he writes to open the piece “OBJECTS,” one of the first in the collection: “Charles Olson announced that it might be a good plan to regard oneself as an object among objects, and in that way have a chance to share the secrets that objects know. To me that suggests not holding oneself as subject with the material about one and in one’s poetry as objects, subject to one’s gaze. Not to see something, compare it with something, and describe the independence out of it. Make the external internal and the internal external? Why? Why not let things do their own doings, not yours?”

Since I don’t remember when, or rather since thirty-eight years ago my writing room has had two big pictures on the wall, Charles Olson the subject of one, Percy Bysshe Shelley of the other. They are two big writer figures for me, and seem to have no association with one another, but consider this: it was in Shelley’s early long poem Queen Mab that I encountered the term “human universe,” which is the title of one of Olson’s most famous essays. I just now re-noticed that the Olson photo, which I acquired about forty-eight years ago, has a poem on one corner, and is a publication by Samuel and Ann Charters. Olson is seen standing with the Atlantic Ocean behind him, almost the same ocean in which Shelley drowned with a book by John Keats in his pocket. The portrait of Shelley bears a line from his early “Song” (1821) “Rarely, rarely comest thou, Spirit of delight.” I bought it one day in 1980, when I went to visit the room in which John Keats died. I suppose most people visit this room when they first come to Rome. It is next to the Spanish Steps, after all. If you haven’t been there, look for it at Keats Shelley Memorial House, Piazza di Spagna, 26. You should not look to see any of Keats’s personal effects where he perished of the dread consumption made worse by monstrously stupid medical treatment. The Italian authorities, acting according to standard fear of plague, burned the poet’s clothing and furniture, tore up the flooring, removed the windows, scraped the wallpaper away, and replaced everything. You may visit this room, but not the things this room was made of.