Sarah Burgoyne, Because the Sun

Because the Sun takes inspiration from a decade-long fascination with a scene in Albert Camus’s L’étranger – the one in which his main character Meursault, ‘press[ed]’ by the blinding sun, shoots a man on the beach. I wanted to take up the relentless heat of the sun and its potential for transference – in this case, from atmosphere to human interaction, from Meursault’s murder of the unnamed ‘Arab’ to the example of gendered violence committed against the victim’s sister (also unnamed), and finally the micro-aggressions against Meursault’s girlfriend Marie. I saw a parallel here between atmosphere and violence in the 1991 film Thelma & Louise – what is it that moves Louise to pull the trigger on Thelma’s assailant after Thelma is safe? In both cases, the sun is a material symbol of pain, an affective backlog we’re slung under, pushing us through desert after desert, where we become deadly.

I gave voice to the speaker of Because the Sun, in part, by weaving excerpts from Camus’s extensive notebooks (scoured for every instance in which he refers to the sun), with the surreal lyric of automatic writing, scientific descriptions of heat and heat stroke, and film dictations. Because the Sun’s pastiche of personal and ‘objective’ (often scientific) voices strives to embody both stylistic and formal ‘relentlessness’ by teasing out discursive tonalities that blend and merge into each other, generating a blinding effect, like looking into the sun. (“NOTES”) 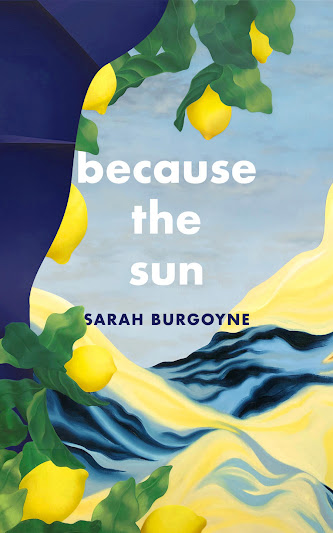 Montreal poet Sarah Burgoyne’s latest poetry title is Because the Sun (Toronto ON: Coach House Books, 2021), a book composed as a quartet of lyric and prose sections: “one, the sun,” “two, the sky,” “three, women” and “four, flowers.” The author of a handful of chapbooks both solo and collaborative, this is Burgoyne’s second trade poetry title, after the award-winning Saint Twin (Toronto ON: Mansfield Press, 2016). As she describes through the notes at the end of Because the Sun, Burgoyne writes the facets of the sun from Camus, and the point at which Camus’ novel and the film Thelma and Louise (1991) meet. “here is the closed room,” she writes, as part of the poem “WHAT WAS / ENFANCE,” in the first section, a poem that cities itself as “after Rimbaud,” “behind the chrysanthemums, the / dead little room and its mat of astroturf, the whole sky is / luminous (in the room), and the great obstacle is what has / already taken place.” An earlier version of that section, also, was first revealed as her “statement” to introduce her work as part of her participation in the “Spotlight series,” posted March 21, 2017. As part of a richly fascinating interview, “Sarah Burgoyne In Conversation With Vi Khi Nao,” posted April 13, 2021 at luna luna, the two discuss the implications of the sun, and Camus, as Vi Khi Nao asks:

The content of this book’s unraveling is structured/outlined by a quote you pulled from Camus: ‘I count. I say: one, the sea; two, the sky (ah, how beautiful it is); three women; four, flowers (ah, how happy I am).’ Can you share with us the intentions behind the omission of the content in parentheses?  Are beauty and happiness not a part of Camus’ sun? Did you want them implied?

SB: These are great questions, first of all. And I want to say that “solarly-accusatory” is an excellent description of the title. It’s actually the reason Meursault gives in l’Etranger during his trial for having shot the man on the beach: “c’était à cause du soleil.” Not the most convincing excuse… but every time the sun is at that low angle and burning right into my eyes I think of that scene. As for the beauty and happiness—yes—I believe they are very much part of Camus’ sun. The reason I scoured his notebooks was because I knew he must be obsessed with the sun, and even though it isn’t always written about in conjunction with beauty and happiness, (at one point he talks about ‘the real climate of tragedy’ being not the night but ‘the heat on the quays’), one doesn’t usually obsess over something unless one is somewhat in love with it…

The third section is a length of extended prose on the right side with an equally-placed hole excised on every face page, setting that text outside the boundaries of an exploration of Thelma and Louise, reminiscent of George Bowering working a similar excision of text in one of the stories in his short story collection, The Rain Barrel (Vancouver BC: Talonbooks, 1994). In Burgoyne’s text, it is as though there is a hole shot through it, whether sun or bullet-hole, that same hole running through and left behind at the end of the section. Burgoyne has previously done some stunning work with the prose poem form, especially the extended or serial prose poem, so it is fascinating to see her explore more conceptual frameworks through this latest collection. “a work of art is / a confession,” she writes, as part of the final section. The conceptual framework of Because the Sun works from Camus and Thelma and Louise, examining an array of sentences on and around the sun, but also explores the very nature of art-making, and the relationships language and art have with each other, artwork has with other artworks, and relationships those works might have with the audience/reader, including the narrator/creator of this particular work. One can create and even hide behind artwork, but it does not erase the creator; it does not provide a place from which to be completely invisible. “the tops / of buildings get a / little colder with all / the damning / evidence in our / hands we’re afraid / of punishment / we’re glad this / went nowhere” (“JACKPOT,” “four, flowers”).

correction: i am my own convection     overwrought
in yellow     i dress in the light
at the bottom of the pool i
ferry light along
here
i am in it (“THE SUN’S CITIZENS ARE SOLAR NOTES”)