Poetry—any poetry—is always political and subversive because it uses language, our foremost technological tool, against its powers of mastery and control. In poetry, language discovers its eros. In poetry, language is always a singer as well as a thinker, a lover as well as an engineer. Language delights in its own being as though it were an otter or a raven and not just the vice president in charge of making sense. (“Why Poetry?”) 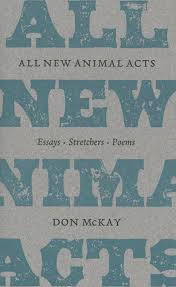 I’ve long appreciated the slow lyric across which Canadian poet (residing in St. John’s, Newfoundland) Don McKay contemplates, something I’m reminded of through his recent All New Animal Acts: Essays, Stretchers, Poems (Kentville NS: Gaspereau Press, 2020). Over the years, and across multiple books of poetry, essays and thinking, McKay has developed a meditative way of approaching and considering the physical world, which for him includes the written word, specifically poetry, as physical to his considerations as pebbles along a shore, the development of the Laurentian Plateau or an outcrop of trees. As he writes in the opening piece, “The Path Between Bewilderment & Wonder: Contemplating Lichens,” “Another way to put this: lichens are naturally occurring koans, puzzles placed in our path to shift our paradigms of thinking and help us into fresh spaces in the contemplation of life forms, natural systems, language, and ultimately the organ we are contemplating them with.”

Across six essay sections, two of which are broken up, further, into pairs, McKay contemplates the works of Joanne Page and Margaret Avison, linguistic study, the grotesque, geological time, confronting grief and the clarity of the lyric. What I appreciate about this collection is that, occasionally, McKay responds via a poem over the exposition of prose, and occasionally poems are included here to illustrate his thinking. Through both forms (and what are “stretchers,” exactly?), his meditations and lyric concerns remain, moving from birds to geology to geologic time, but through what prose might offer, as though his best thinking form has expanded from the seemingly almost-exclusive realm of the lyric poem and further into prose.

When a person considers all the indexical and iconic messages being sent and received at every instant in the natural world, she/he/they risks being overwhelmed. How many communications within my endocrine, circulatory, digestive, immune, and neurological systems are going on as I inscribe these symbolic glyphs in my notebook? Last week I ventured to address my blessèd immune system, iconically, through my doctor and her hypodermic needle, presenting it with a small sample of this year’s flu virus, which I hope it will see fit to recognize when it arrives in greater numbers and, if it is all possible (“I realize you have a very busy schedule and many pressing obligations”) disable. Could it be that we embrace, endorse, and live by symbolic language not only out of our hubris as the symbolic language not only out of our hubris as the symbolic animal, but also as a defense against infinitosis—the disabling cognitive overload that could occur if we truly registered the iconic and indexical messages swirling around and within us? (“[     ] OR ICONOSTALGIA”)