Women Relax (And Be Yourselves)

I recently picked up Salt Lake City, Utah writer Ashley Farmer’s poetry title, The Women (Civil Coping Mechanisms, 2016), a book that emerged out of a very specific set of prompts, as she writes in her opening “Author’s Note”:

I started The Women in 2011 when I began Googling various women-related phrases: “happy women,” “sad women,” “women say,” and so on. Knowing that my online habits, browser history, and geographical location would all shape my results, I wondered what might show up. The searches returned fragments that ran the gamut of media types and texts: advertisements, news headlines, celebrity gossip, feminist websites, beauty tips, and relationship advice all filled my screen. Also among the results: anti-women screeds, men’s rights activists’ propaganda, misogynistic ramblings, and tired tropes about women’s lives. Using the first seven pages of search results as raw material, I sought to collage and reconfigure what I found. While this project began with a concept, it is not conceptual. Instead, I found value in not simply copying-and-pasting these findings but in actively chopping up, stitching together, and writing through the texts. Through this process, the Google results that might have simply washed over me in the past acquired new meaning. 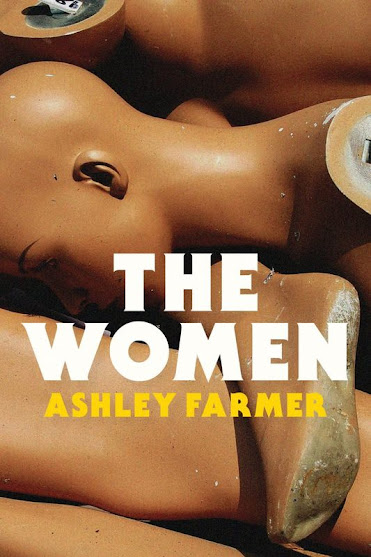 Even without knowing that Ashley Farmer is predominantly the author of works of prose—including the forthcoming essay collection Dear Damage (Sarabande Books, 2022), the chapbook Farm Town (Rust Belt Bindery, 2012), the short story collection Beside Myself (PANK/Tiny Hardcore Press, 2014) and the novella The Farmacist (Jellyfish Highway Press, Inc., 2015)—the pieces in The Women might suggest that. This isn’t a swipe or a complaint, but an acknowledgment that her poems are constructed very much out of sentences, allowing one to build upon another, and allowing that accumulation, or even that collision, to inform each piece’s short narrative. Sometimes the narrative is a collage of ideas around a particular phrase or thought, and other times, the narrative is more straightforward, allowing one foot to step directly in front of another, towards a conclusion.

The poems included here are constructed via selecting threads and phrases from Google searches. Through her searches, Farmer collects sequences of threads and interweaves those searches into poems that each sit beneath titles that one might suspect were lifted from her original search phrase, but for the acknowledgments that include that certain “of these pieces previously appeared, sometimes in slightly different forms, under slightly different titles.” It would suggest that the searches, however they were conducted, utilized an array of phrases and sentences, sorting the barrage into bins, and from each of those bins, crafting each poem from those materials. The Women plays with elements of exploring and documenting how women are seen, depicted and discussed, pulling at a variety of depictions of cultural space, worked neither as flarf nor conceptual, but shaped into poems that write of domestic labour, violence, home, love, fear, strength and community, body image, health, leadership, marriage, weathering storms and notions of being bad or inherent goodness.

Her poems include shades of the works of Cindy Sherman and Francesca Stern Woodman, in that all three determined their gaze on and around the form and cultural ideas surrounding women, from the abstract, the absolute and the absurd to concurrently acknowledge and document as well as strip away those layers of overlaid determinations by a male-dominated culture; all three of these artists, in their own way, allowing the women they were viewing and/or discussing, their subjects, to determine the shape of their gaze, but also shaping that final result. “See two young women harvesting hope in Marion County, / 1944,” Farmer writes, in the poem “Women Land,” “cultivating new pathways to the boardroom.”

Sometimes one wonders if our nation is a public strip club. A mother and daughter who run a brothel for truckers fight back when the mafia tries to take over their operation. Men’s fragrances smell like excuses for getting home late. You will not stop women.