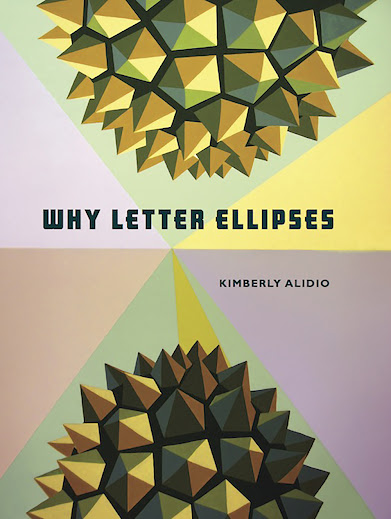 I’m working through my copy of Arizona (currently relocating to New York State) poet Kimberly Alidio’s second 2020 title, Why Letter Ellipses (Chicago Il: selva oscura press, 2020), following : once teeth bones coral : (Brooklyn NY: Belladonna*, 2020) [see my review of such here] and her full-length debut, after projects the resound (Black Radish Press, 2016). As with her prior collection, Alidio’s is a lyric less broken than stitched, structured as a kind of collage-lyric, or coat of many colours. “stitch,” she writes, in the opening poem, “I saw seams / sparrows / fontanel / peonies / a mother wants to know                          neither of ours / speak from granite / optimist                     I have to get / poisoned by rock               you can’t / come with me I don’t want to / suffocate” (“stitch”). The book is organized in four sections—the shorter pieces that make up “ARCHIVE IS TOUSLED,” the longer sequence “DEAR ARCHON,” the poem-trio in “THINGHOOD CIRCULATION” and the final poem-section, “CODA.” The poems of Why Letter Ellipses examine the differences between people and language, and erasures through colonialism, writing and forcing her way into acknowledgment. As she writes as part of the poem “dearest, I’m writing from inside this place to you / who are in a totally different place,” “Geography after all is a modernist romance, a language for how / We diverged from one another. Writing is the fragment of a relation / Made possible by archival preservation and document’s promise. // You and I are here to unsettle.” Hers is a lyric informed by history and driven to, as she says, unsettle. Her poems are expansive, far-reaching and multiple, forming a pastiche of energy, language and sound. She writes the archive, and from the archive, as her extensive bibliography endnotes suggest, weaving in thoughts and phrases from writers such as John Dryden, Gerald Manley Hopkins, Stacy Szymaszek, Alice Notley, Amiri Baraka, Bernadette Mayer, Fred Moten and Edith Moses, as well as references from Filipino Pioneer and Filipino Student Bulletin. The poems exist as both a pulling apart and a gathering together. “Fragments her body into,” she writes, as part of the extended poem “a girl knows geopolitical strategy,” “someone historical      existence / All actions [.]”

In an article posted on the Poetry Foundation website last fall, “My Native Language Is Noise,” Alidio writes on the boundaries, secrets and possibilities of language, growing up in a household of three languages—English, Tagalog and Pangasinan—two of which she was never taught. “Why does Language Poetry soothe me? Because this is what I know: languages exceed our conception of them. They are more than complex forms of cultural activity, more than the material of poem-making, and more than their communicable and informational functions.” The first in her extended family born in the United States, and the first one of same raised monolingually, I’m fascinated with the way she describes absorbing and experiencing language. She writes of colonialism, immigration and assimilation, and how it inadvertently led her to a different kind of awareness:

I developed an ear for emotional prosody: variations in tone, pitch, volume, speed, and pauses. I became sensitized to proprioception, or the language of body positioning, gaze, gesture, muscular tension, and facial expression. The phatic patterns of vocal tics and flourishes came to me undifferentiated from word phonemes. I listened for honorifics that mirrored and performed a place in hierarchies. I wanted to catch someone forgetting to use one and then course-correcting. I wondered because I had no idea how one would learn to use an honorific in a way that did not seem like an extra limb.

The openly unstable and half-imagined sense-making of languages has created space and autonomy in my perception, interpretation, and affiliations. Into adulthood, I feel at home among people speaking any language I do not. While excluded in multiple ways from meaning-making, I am excused from obligations to pay attention and participate in any normative, culturally-specific ways. When people speak their own language around you, they neither police what they want you to hear nor enlist you into their particular rationalities. You are both apart from and a part of what’s going on. It’s an experience of intimate abstraction to be included through forms of sonic and somatic environments, the non-lexical elements of togetherness.

In Why Letter Ellipses, Alidio writes a documentary-collage poem, one that works to reconcile the different facets and factors of her own experiences and interactions around culture, language and history. As she writes to open the final poem-section:

Docupoetry? I was a historian first.
Or second.
Never at the same time

maybe a few years of overlap
maybe just at the moment?

which has something to do with form

the aesthetic experience of reading and writing the historical study

the argumentative and over-cautiously cited narrative

within the closed circle
of historiography