Khashayar Mohammadi, Me, You, Then Snow

Close your eyes. Picture your ego and draw.

Close your eyes. Picture my heart and draw.

Each pebble cast into encircling lakes.
Each ripple unfolds into you. (“Moes’ Skin”) 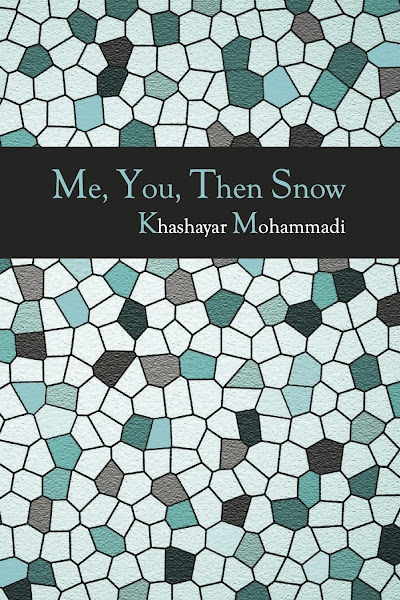 Me, You, Then Snow is organized into five sections, the first two of which are constructed as self-contained suites/sequences: “Moes’ Skin,” “Dear Kestrel,” “Salon,” “In Loving Memory of Midnight” and “Homohymns.” I do find it odd any book that doesn’t include a proper acknowledgements, not referencing but for a single publishing credit, especially knowing that the first two sections were originally published as chapbooks: Moe’s Skin (Windsor ON: ZED PRESS, 2018) and Dear Kestrel (Toronto ON: knife│fork│book, 2019) [see my review of such here]. An acknowledgements is, quite literally, about acknowledging those journals and other publications that offered support, and can often provide certain readers a context. The sole reference included is editor and publisher of the second title, Kirby, thanked for the sake of producing Dear Kestrel. A writer, translator and photographer, Mohammadi is the author of three poetry chapbooks, including the more recent Solitude is an Acrobatic Act (above/ground press, 2020), as well as the translator of Saeed Tavanaee Marvi’s chapbook-length THE OCEANDWELLER (above/ground press, 2021), as well as currently working on a full length poetry collaboration with the Toronto poet Terese Mason Pierre.

As part of a 2019 interview on the Invisible Publishing site, Shazia Hafiz Ramji asked Mohammadi about the chapbook Dear Kestrel:

Shazia Hafiz Ramji: How did you arrive at the title of your chapbook, Dear Kestrel?

Khashayar Mohammadi: A few years ago, during a very rough time in my life, I started writing small prose-poems addressed to my dear friend Ke, whom this book is dedicated to. I started every piece with “Dear Kestrel,” and after a while I found this epistolary format both intimate and endearing. I also enjoyed the ambiguity of “kestrel,” the lack of age, gender, etc. allowed each reader to imagine a different person, so I kept writing poems in this format in the years to come, when they weren’t even addressed to Ke herself. None of these poems in this chapbook directly address Ke, it’s just a format that started with her, the primordial Kestrel!

The difference of Moe’s Skin to “Moes’ Skin” is a curious one, reminiscent of the difference between Leonard Cohen’s fifth studio album, Death of a Ladies’ Man (released November 13, 1977) and his subsequent poetry title, Death of a Lady’s Man (published September 27, 1979). The difference between these is rather clear, from the plural to the singular, but Mohammadi’s shift is less so. What is the difference? And yet, whether writing poems to “Moe,” epistolary poems to “Kestrel” or poems responding to film, the poems in Me, You, Then Snow accumulate into a collection of response poems, placing the narrator in the world in relation to those around them. In poems such as “Canada Day 2019,” “Greg’s goodbye party” and “Pastoral,” Mohammadi centres the narrative “I” in relation to other people and experiences with travel, love, desire and media, all of which reaches out as a way to explore inward. Poems that seek connection, safety and love. The title moves, ripples, outward from “Me” to “You” and then the abstract-beyond, “Then Snow,” all of which seems to sum up perfectly the perspective here, although with a looking outward in part to better comprehend the self, and the narrator’s relationship with any and all else. “I hone my desire to feel more in tune with my past,” he writes, as part of “No pockets ghazal,” “unibrow beauty         hairy arms beauty [.]” Or the poem “Anemone,” that opens: “When I speak of the body, I speak / of its ability / to reconnect and repair [.]” Further on in the same short poem, writing:

The lake is a body without organs.
I am an organ without a body.
My body is a schism between selves.
Each self is a homeland to the body.
So I lay down on the waterfront
to reconnect, extend limbs as an offering
of nautical community housing
and float weightless: an anemone