Brooklyn, New York poet, editor and publisher Brenda Iijima’s latest is the full-length Bionic Communality (New York NY: Roof Books, 2021), an expansive book-length poem composed out of lengthy, layered lyric stretches and fragments. Bionic Communality is a book of movement, of water; a book of action, crisis and reaction. As she writes as part of her “AFTERWORD,” “Although this text resembles poetry it is an expression of changeable forms. The work necessitated undoing the stricture of genres of language and relation to embrace raw impulses and facts of body and presence of many means and modes.” Her “AFTERWORD” begins:

This text is a choreographic account of somatic involvements in my hometown of North Adams, Massachusetts between 2010 to 2015, with after-effects that continued to be written in until 2020.

Emergent forms of movement I’ll call dance were performed unannounced in civic spaces, in the forest, on waste dumps, in cemeteries, in people’s yards, and around town for spontaneous audiences that came upon my body articulating in zones and transitional spaces. Experimental data absorbed and operative in 360 degrees generated language. When performing, I wore one of three distinct outfits: a men’s XXL black tee shirt with an image of a wolf on the front face, a red silk office dress or a green sateen ballgown. The garments affected the way I was able to perform and elicited a range of divergent responses from onlookers.

During my childhood, in the 1970’s, there was a spate of murders of young women, several of their deaths remain unsolved. The violence the women endured, and the underlying genocidal history of this place (and nation) have merged and resonate. The violence clings as a second skin for those who encounter this space.

The grief of those undermentioned, and or occluded histories are part of my orientation in the world. It became palpable that the town’s residents struggle with grief, consciously and unconsciously. The traumas of the past communicate and relate directly with the traumas of the present. 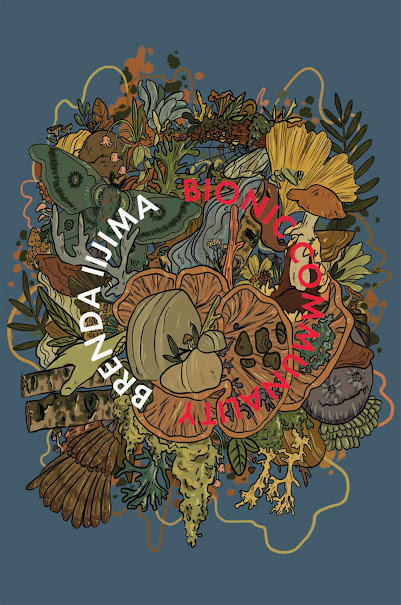 The structures of Bionic Communality are reminiscent of certain phrase-accumulation pieces of some of the loosely-affiliated assemblage of Kootenay School of Writing poets, whether Colin Smith, Dorothy Trujullo Lusk, Louis Cabri or Jeff Derksen, linked through the ways in which each allow the accumulations themselves to provide potential meaning and context. One offers the assemblage, with the final structures to piece together through the many and multiple collisions, collections and contusions. “dirt, my mother tongue,” Iijima writes, offering both the tangible and the experiential. Later on, “in a tiny white house where I was raised / under the velvet light of the horizon / working for a pittance / of relief [.]”

Hers is a lyric of movement, dance and constant motion. “lodged into the stream of the poem,” she writes, towards the end of the volume, “infiltrate tongue to fist assay / communication through external device / confluence of meanings rush headlong / body rounded out like a boulder [.]” It is curious to consider this work, as well, against such as the chapbook-length multidisciplinary poetry-dance work Grapple (above/ground press, 2016) by Chicago poet Carrie Olivia Adams, namesake of Samuel Adams, the American founding father who originally provided Iijima’s hometown of North Adams its name. Whereas Adams’ movement is collaborative and named, Iijima’s is singular, yet legion, existing simultaneously across a number of threads and considerations. Speaking on a previous project with Andy Fitch for the Los Angeles Review of Books Blog, posted October 6, 2017, Iijima spoke to a similar simultaneousness, responding that “As human animals we are always inside language and ecology as all-encompassing spheres of participatory reality. The experience of thinking and feeling through crisis and conundrum (and bonding in necessity is crucial), the exigencies of our times are overwhelming.” Iijima writes the overwhelmingness along with the communal nature of how we not only interrelate, but require for survival; she offers both the excess and that excess shaped into a form with which to direct our thinking.