I dream of you & a tree
that flourishes serpentine
a labyrinth up through packed earth
through clay & quartz & mica, through surfacesoil
the trunk tapers, splits into Ys
that further divide, forking limbs of limbs
a bird on each, flashes of magpies
darting chickadees, a perching predatory eagle
pelicans & storks & herons & kingfishers & cranes
leaves & twigs, barely visible
a tree with feathers talon beaks
you, a hummingbird, delicate & light-boned
in torpor, fractional heart rate
central among the wings of the tree 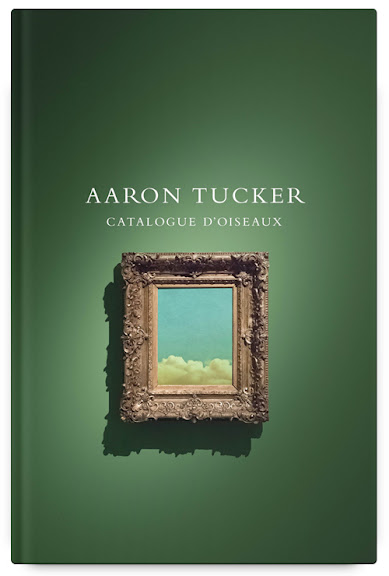 I’d been curious to see the full-length poem that makes up the continued, ongoing present of the lyric of Toronto poet Aaron Tucker’s third full-length poetry title, Catalogue D’oiseaux (Toronto ON: Book*hug, 2021). Catalogue D’oiseaux is a single book-length poem composed in birdsong, writing, as the back cover offers: “a year in the life of a couple separated by distance, carefully documenting time spent together and apart. When reunited, they embark on travels across the globe—from Toronto to Berlin, Porto to the Yukon.” “I in Toronto amid the chills off Lake Ontario,” he writes, early on in the poem, “comforted only by those long flights to you / when I looked out the window at the clouds & the bent horizon / the sun rising above it & the ocean below [.]” The intimacy and the narrative expositions are a shift from the structural concerns of his first two, far more constraint-based, poetry titles: Irresponsible Mediums: The Chess Games of Marcel Duchamp (Bookthug Press, 2017) and punchlines (Toronto ON: Mansfield Press, 2015). In an interview posted January 1, 2018 over at the ottawa poetry newsletter, conducted  by Ian Whistle, Tucker references composing poems that could very much be the opening strains of this collected lyric. As he offers: “I’m writing weird little bird-lyric poems based on some of the travelling I have been doing. I’m not exactly sure what they are, or what they might become, but I’ve enjoyed writing them so far.” Tucker writes on reading, travel, musical composition, writing and long distances, allowing the flourishing of this new relationship, this new connection, to hold as the central basis of the poem’s strength and momentum. There is something interesting in the blend of the intimately personal and the structural that Tucker explores in this singular poem. It is comparable, in a certain way, to the human elements that Canadian poet Christian Bök allowed in the text of his most recent volume, The Xenotext Book 1 (Toronto ON: Coach House Books, 2015) [see my review of such here]. The intimacy allows the structure of Tucker’s Catalogue D’oiseaux it’s heart, propelling the mechanics that allow the machine to live.

you are a jackdaw on our apartment’s windowledge
watching as I write to you while listening to Messiaen’s piece
as performed by his wife, Yvonne Loriod, in collaboration
imagining him composing with her straight back in mind
her fingers spanning, migrating between each bird
the piece is tailored to her body so only she can play it
perfectly
& when she performs it, it is the only music ever written
it seals the couple, the music a bridge between two shores

There is also an interesting tonal element that seems newly introduced to Tucker’s lyric, as though the subject matter provides for a softer, more serious meditation, and one I would have read as perhaps by Ottawa poet Stephen Brockwell over the work of Aaron Tucker.

As part of an interview posted at Train : a poetry journal later that same year, Tucker speaks of the collection, then still in manuscript form: “By contrast, the book I’m working on now, tentatively titled Catalogue d’oiseaux after Olivier Messiaen’s solo piano piece of the same name, involved actually writing the poetry part and not just handing it off to my computer co-author. But in much the same ways, I did find myself putting the different parts together: […] it’s a long lyrical poem, stitched together by travel, art, sex, birds, growing older and into love outside your twenties, with all the events of two lives combining.” Later, in the same interview:

You seem to approach poetry collections as projects. How did this process emerge?

That’s funny, yes, I hadn’t thought about it like that. I think part of this stems from my tendency to start with big questions and then work to answer them with some poetic gesture. For Irresponsible Mediums, it was “How can I merge chess and poetry in some way?” For Loss Sets (http://aarontucker.ca/3-d-poems/), an ongoing collaborative project with Jordan Scott, Namir Ahmed and Tiffany Cheung, Jordan actually asked “Could we translate poems into 3D printed sculptures?” These lead to smaller questions, and it’s usually in answering those smaller questions or problems that the actual work gets produced. But I think working backwards from a large, semi-impossible looking question, works best for me.

I think for Catalogue d’oiseaux, the beginning question was “What would a love poem, at this stage of my life, look like?” Looking back, I can see myself asking this because I did want to write something that looked a little more what I used to write, something lyrical, less conceptual and more emotional; I wanted to make a pretty thing, rather than sort out some sort of intellectual concept.