Rob Winger, It Doesn’t Matter What We Meant

We’ve come here, cliffside, to admire
this steel assemblage poised against
tankers sluicing past the Western wharf.
And we’ve come without irony:
those flames, we say, that’s beauty.
From here, every shoreline forge is automatic. (“ESCARPMENT”) 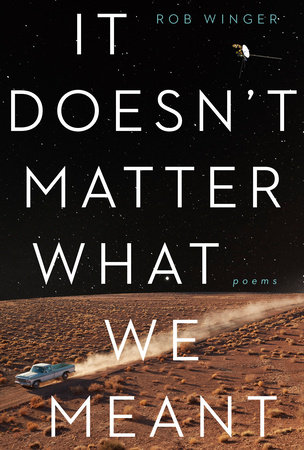 Peterborough, Ontario-area (formerly Ottawa) poet Rob Winger’s fourth full-length collection, following Muybridge’s Horse (Gibson’s Landing BC: Nightwood Editions, 2007) [see my review of such here], The Chimney Stone (Gibsons BC: Nightwood Editions, 2010) [see my review of such here] and Old Hat (2014), is It Doesn’t Matter What We Meant (Toronto ON: McClelland and Stewart, 2021), constructed as an assemblage of poems that explore investigations into unintended consequences and system failures, wrong turns and other large and small disasters. “The crop-dusters,” he writes, as part of the poem “SCHOOL DISTRICT,” “from my father’s youth also meant no harm. They spread promise / across their fields. Their noxious clouds made every sunset sparkle.”

Set in five sections of poems—“STILL STILL,” “ALL BOAT,” “EACH HALF,” “JUST LINE” and “EVERY SPAN”—Winger’s poems reference speed traps, Voyageur 1, chemical infection, nuclear disaster and other consequences through an evocative series of meditative explorations. He leans into the absurd, to better offset an earnestness; to better present his arguments. “When I talk, again, about Voyager I / out there beyond the heliosphere,” he writes, to open the poem “A DOZEN MORNING TRANSLATIONS,” “what I really mean is that / none of us recalls the birth canal.” Moving through elements of time, It Doesn’t Matter What We Meant meditates on the immediate present, including how we may have arrived here, and what it might mean for the future, if we are even to have one. His poems hold a selection of moments up to the light, and force us to consider and even re-consider them, if even just for a moment. “These pre-apocalyptic wedding photos,” he writes, to open the poem “A PHOTO OF YOU AT ELEVEN.” The poem ends with: “This photo of you, at eleven, / then. Today’s the day / we took the picture. // Look.” There is something curious about the way Winger examines time, different periods and even the different aspects of storytelling, history and myth. Winger explores different facets of these, not wishing to present a single version or hold the weight of one over another. This is perhaps an extension of considerations he originally explored during the composition of his first collection, Muybridge’s Horse, discussed as part of an interview Alex Boyd conducted with Winger in August 2007:

Even to say “advances” in technology is a biased way to put it, but Muybridge is well known for certain accomplishments. What do you think technology does to our changing perceptions?

This is a lot of what the book tries to address, I hope. Part of what I think it does is create an illusion that the present moment is more complex, more complicated, more advanced, and more progressive than any other previous era in history, a view that is so non-relative and arrogant that it tends to dismiss historical periods as somehow primitive and therefore not as tough or central as our own time. This is a real problem, it seems to me, because it makes people forget historical precedence, and allows for a view of ourselves that is fundamentally arrogant, like a teenager insulting his/her grandparent because they don’t know how to use an iPod, without considering that these folks might have grown up without any of the technologies they’re used to, when war and segregation and violent misogyny were as big if not bigger problems than they are now. I suppose what I’m saying is that our own age has most of the same problems as every other age had; the idea that our perceptions are “changing” all the time, then, seems like a marketing ploy to sell ourselves a new, improved version of how things are. Have you ever heard that Tom Waits tune “Step Right Up”, where he advertises a product that will solve all of your metaphysical and personal troubles, no matter how big or small? Some of that attitude is what our obsession with technology does to our understanding of history, I think.

The second section of the book is made up of a curious array of response-poems, pieces influenced, sparked by or even directly responding to fairy tales, folk tales and more contemporary offerings: “LETTER TO IRON HEINRICH,” after “The Frog King, or Iron Heinrich”; “A SOCIAL HISTORY OF TONE DEAFNESS,” after Adrienne Rich’s “Trying to Talk with a Man”; “LETTER TO A GRANDDAUGHTER,” after “The Story of Grandmother”; “RED TRUCK TREATY,” after “I have been losing roads” from Dionne Brand’s Land to Light On (1997); “DAUGHTER OF THE AIR,” after “The Little Mermaid”; “APPLE POEMS,” after Phyllis Webb’s Naked Poems (1965); “LETTER FROM VASILISA’S HUNGRY GHOST,” after “Vasilisa the Beautiful”; “WHAT THEY SAY,” after Sylvia Plath’s “Lady Lazarus”; and “BLUEBEARD’S LAST WILL,” after “Bluebeard.” I would be interested to hear some of Winger’s thoughts on the process of selecting and responding to these pieces, and how each might have been approached, each one exploring or building upon an aspect of their source. There is much going on in these pieces. “I’m writing, now,” he writes, as part of “LETTER TO IRON HEINRICH,” “to ask for the broken iron / that fell from your heart that morning.” Or this, the penultimate part of the six-part sequence “RED TRUCK TREATY,” that writes:

I didn’t want to have to teach you all this.
It’s not easy. Those statues by my pond
I inherited from my grandmother.
They’re just men holding lanterns,
fishing. They’re part of history is all.
Why can’t you leave well enough the fuck alone?