Meghan Privitello, One God At A Time

A BASIC RESPONSE TO YEARNING

All the seahorses in the world have gathered in your backyard for
suicide. What do you make of this? How did they all forget the
meaning of Hallelujah? When the animals text you to ask for Xanax,
know that God has withheld the most important threads that hold
us together. When he finds corpses, bludgeoned or beloved, he
steals every part of them to build villages. Who will thrive there, in
the shadow of our breathing? Why were we not built to last? God
is as sad as us. He eats as many noodles as he can until he sleeps
because his creations continue to fail: the cake forgets to rise, the
baby, in her sleep, dies. He confesses to himself that creativity is
a curse. He would kill for the world to be a repetition of pebbles.
The seahorses cry over their spines and scales, about how every
curve and arch is evidence of the tiresome weight of the body. This
is how carelessly we were made: when we came home at night we
can’t put ourselves back on our hangers without dying. 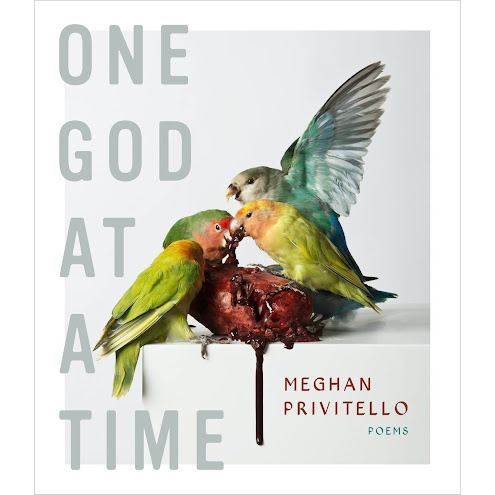 New Jersey poet Meghan Privitello’s second full-length collection, after A New Language for Falling Out of Love (Portland OR: YesYes Books, 2015), is One God At A Time (YesYes Books, 2020), a collection of fiercely powerful lyrics and “gruesome outlines” (including some remarkable abecedarians). Privitello writes on encounters physical and spiritual, writing those three cultural pillars of sex, death and religion, and exploring the physical and metaphysical God as weapon, lover, salvation and destroyer, mangling everything and anything in sight. Privitello’s lyrics are stunningly evocative, twisting and declaring and blushing. “Let’s begin with the tongue,” she writes, to begin the opening poem in the collection, “REVELATIONS,” “the laps it runs around its I wants / until desire is a pudding. / Oklahoma has a handle on itself. / I have an anal complex. / Birds will never remember my face. / A paper crane is lucky / because it will never question / the way it was made.” Her lyrics reverberate, writing a density of thought that hums across each line and line-break. The poem “GOD AS BUTCHER” is just stunning, as she writes: “For God, I spread my legs / until I am inverted. He sees / the mute room of my womb / and chooses to keep me that way: / not good enough to multiply.” In an interview conducted by Kallie Falandays over at American Micro Reviews & Interviews, Privitello responds to questions on her then-newly published debut, A New Language for Falling Out of Love (a book I clearly need to get my hands on), in a way that could just as easily be referring to this current collection:

KF: Many of these pieces seem to explore love and loss and misunderstanding in a raw way. Can you speak a bit about what inspired these poems, what it was like writing them, and what it was like arranging them in a collection?

MP: I often ask myself the same question you are asking me: what made you write these sad sad poems? Contrary to the life of the poems, my life now is extraordinary. I’m loved. I love. I have experienced few losses. I think these poems come from a place of what I could call “the possible now.” I’ve had many moments in my life where I was almost literally driving my car off the road, destroying myself and in turn the people around me. I think many of these poems are written by and from a past self, and show a life of what could-have-been had I not broken out of self-and-other-imposed chokeholds. There’s also a lot in these poems about marriage, which makes it sound pretty bleak, because that is how I always imagined it would be. I swore I would never get married but did. This is a promise to myself I’m so glad I broke. These poems also explore the fears of being married, of being “a wife,” whatever the fuck that means. These poems all came out quickly and almost fully formed. When I was arranging them in the collection, I was trying to find links within the poem, like particular words that carried over from one to the next. I felt that they were all thematically and tonally similar enough that they needed something smaller to hold them together. Thank you, nouns. You are the divine glue.

One God At A Time also includes poems on marriage, although with the gaze shifted to include and encompass conversations on the Almighty. “Rarely have I allowed myself to know a man,” she writes, as part of “YOU DON’T KNOW GOD,” “save for the time I asked a sculpture of Christ / to tongue me his secrets, a slug-shine of truth: / Use me until you are real, he said, and I felt the / vapor of my unknowing rise, rise, rise / while my body hardened into a sweet scab, / exposed to the wound it works to cloak.” There are conversations her poems have with religion and spirituality, writing her explorations of God as physically human, exploring the benefits and drawbacks of such a powerful entity flailing through the attributes as a fully human presence. The poems that make up the suite “EXCERPTS FROM THE ENCYCLOPEDIA OF SEXUAL POSITIONS WITH GOD,” for example, being a case-in-point, such as the poem “THE COMMUNION,” that ends: “As a woman, / you’ve swallowed enough of God’s / currency to have an ocean behind the / teeth, salty enough for any wrongful / bones to float. Watch God bob up and / down in the cold current, his shrinking / cock the first promise of all the things / he was never willing to give you.”