in the terminal there is concealed
carry – but is never what we wish
to hold in secret like a puppy or bird
or the heart of a lover upon which
the road guides us to. And first there
could have been bullets but instead
there is only my hands lathed into
dagger my mouth a wine key, the road
a drunken maiden. And there is no
on-board drinking but there are more
drivers who have seen fights happen to me
than have stopped the journey and so
first there was no way to go. And so
on all fours I sprawled spilling wine mouth
refusing to unpack my voice as it walks
out of my bod. 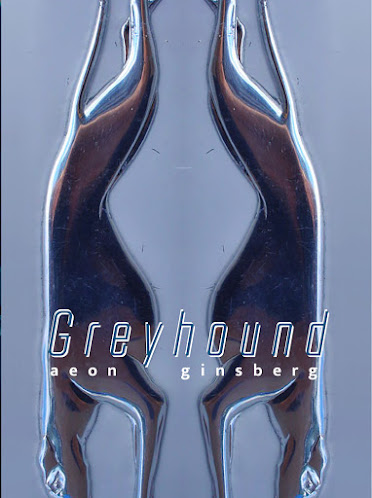 Baltimore, Maryland poet Aeon Ginsberg’s full-length debut, following the chapbooks Until The Cows Come Home (Elation Press, 2016) and Love/Loathe/Lathe (Nostrovia! Press, 2017), is Greyhound (Blacksburg, VA: Noemi Press, 2020), a suite of lyric fragments, becoming and being, and a reach towards finally arriving. “There are only two genders: depressed and correct. / In the poem where I’m a dog,” they write, early on in the collection, “I say I’m a Chesapeake Bay retriever / and everyone says it’s sad because my grandma died / and you want to die too. // In the poem where I leave, no one thinks it’s to somewhere.” Greyhound is a book of leaving, and the journey of in-betweenness, writing out the difficulties of navigating the differences between how one feels and one is seen, and the arbitrary boundaries set by the expectations of others. “I tell another trans person,” they write, “I feel most in my skin / in Greyhound bus terminals. / Neither of us talks / about what it means to only be seen in a liminal way – / to only be seen when we are in movement, between two points. // Let’s talk about what liminal means.” Ginsberg, who also had work included in the recent anthology We Want It All: An Anthology of Radical Trans Poetics, eds. Andrea Abi-Karam and Kay Gabriel (New York NY: Nightboat Books, 2020) [see my review of such here], was interviewed in 2018 for the Metatron Press website, after the manuscript for “Greyhound” was named one of the finalists for the 2018 Metatron Prize for Rising Authors:

What is Greyhound about?
Greyhound is a long form poetic project/memoir-in-verse exploring the intersections of transit (movement) and transition (gender identity/perception/performance) through bus lines, trains, and airplanes; namely though, Greyhound buses. The pieces are titleless because they are all, as a whole, the Greyhound poem I was trying to write.

Could you tell us a bit about the process of writing Greyhound?
I started contemplating writing Greyhound in 2015 when I began realizing my own identity, how I viewed it and the way I performed it, began to meld with various long-distance trips. The previous year I travelled across the continental US for the first time alone and again in 2015 I made the trip to the other coast. I started working on the pieces in an actual way in late 2016 after a three-week performance tour including a 30-hour bus from Salt Lake City to Minneapolis. I kept noticing a link between movement and gender and how the ways I carried my body and the ways my friends and comrades carried themselves would dictate the perception of our identities. After making that connection the rest flowed like a river from me.

Wry and self-aware, Greyhound exists as a single, book-length suite sketched out in fragments, accumulating and articulating on that ongoing journey into being. The poem offers a curious blend of unsettledness, seemingly endless journeying, and, finally optimism. The fragments hold together because the space is a singular one, and the journey is, in the end, a singular one as well, from one end of the poem to the other:

This is the single stall bathroom of road.