The Xenotext is an experiment that explores the æsthetic potential of genetics, making literal the renowned aphorism of William S. Burroughs, who claims that ‘the word is now a virus.’ Such an experiment strives to create a beautiful, anomalous poem, whose ‘alien words’ might subsist, like a harmless parasite, inside the cell of another life form. Many scientists have already encoded textual information into genetic nucleotides, thereby creating ‘messages’ made from DNA – messages implanted, like genes, inside cells, where such data might persist, undamaged and unaltered, through myriad cycles of mitosis, all the while saved for recovery and decoding. The study of genetics has thus granted these geneticists the power to become poets in the medium of life.

The Xenotext consists of a single sonnet (called ‘Orpheus’), which, when translated into a gene and then integrated into a cell, causes the cell to ‘read’ this poem, interpreting it as an instruction for building a viable, benign protein – one whose sequence of amino acids encodes yet another sonnet (called ‘Eurydice’). The cell becomes not only an archive for storing a poem, but also a machine for writing a poem. The gene has, to date, worked properly in E. coli, but the intended symbiote is D. radiodurans (a germ able to survive, unchanged, in even the deadliest of environments).

A poem stored in the genome of such a resilient bacterium might outlive every civilization, persisting on the planet until the very last dawn, when our star finally explodes.

Book 1 of The Xenotext is an ‘infernal grimoire,’ introducing readers to the concepts for this experiment. Book 1 is the ‘orphic’ volume in a diptych about both biogenesis and extinction. The book revisits the pastoral heritage of poetry, admiring the lovely idylls that rival Nature in both beauty and terror. The work offers a primer on genetics while retelling fables about the futile desire of poets to rescue love and life from the ravages of Hell. All poets pay due homage to the immortality of poetry, but few imagine that we might write poetry capable of outlasting the existence of our species, testifying to our presence on the planet long after every library has burned in the bonfires of perdition. (“VITA EXPLICATA”) 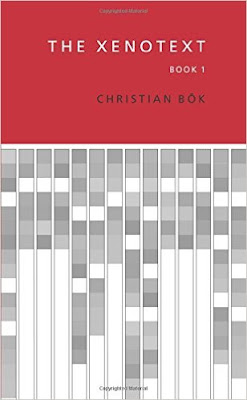 Calgary poet and critic Christian Bök’s third poetry title—after Crystallograpy (Toronto ON: Coach House Press, 1994) and the Griffin Poetry Prize-winning Eunoia (Toronto ON: Coach House Books, 2001)—is The Xenotext Book 1 (Coach House Books, 2015), the first volume of his long-awaited work of ‘living poetry.’ As the back cover informs: “Internationally renowned poet Christian Bök has encoded a poem (called ‘Orpheus’) into the genome of a germ so that, in reply, the cell builds a protein that encodes yet another poem (called ‘Eurydice’). After having illustrated this idea in E. coli, Bök is planning to insert his poem into a deathless bacterium (D. radiodurans), thereby writing a text able to outlive every apocalypse, enduring till the Sun itself expires.” It becomes fascinating how Bök has managed to construct poetry, let alone a multiple-volume project, around such an experiment, extending, exploring and capturing the connections between science and poetry dozens of times beyond what anyone has achieved up to this point, proving yet again just how far ahead he is of his peers. And of course, the notes at the end of the collection detail just how intricate some of the conceptual frameworks for some of the individual pieces were, including:

‘The Nocturne of Orpheus’ is a love poem – an alexandrine sonnet in blank verse. Each line contains thirty-three letters, and together the lines form a double acrostic of the dedication; moreover, the text is a perfect anagram of the sonnet ‘When I Have Fears That I May Cease to Be’ by John Keats (transforming his meditation about the mortality of life into a mournful farewell by the poet before he enters Hell).

‘The Nucleobases’ is a suite of poems derived from atomic models for the basic units of both DNA and RNA. Each text is a modular acrostic, in which the structure of a molecule defines the arrangement of a restricted vocabulary – only words of nine letters, beginning with one of the following: C (for carbon), H (for hydrogen), N (for nitrogen), or O (for oxygen). Each poem conveys a pastoral sentence about the honeybees (doing so in honour of Virgil – the first poet to have a line of poetry encoded into the genome of a flower)

There is something quite compelling in the way that Bök manages to compose his works with such attention to detail that the conceptual framework becomes simply an element of the appreciation of the finished piece. One doesn’t simply marvel at the conceptual frame; one doesn’t simply admire the work for work’s sake. And yet, the piece created utilizing such an intricate and detailed structure, especially when one begins to understand how detailed and precise his knowledge of scientific detail has been researched and questioned (there is nothing worse than a poem utilizing science when, as some have pointed out, the science behind the poem is actually incorrect).

We have seen it in the rope that hangs the felons, and we have seen it in the whip that goads the slaves. It has knit itself into a sylvan laurel, not unlike the diadem of dazzling moonlets that encompass the carousel of Saturn. It can circumnavigate a shooting star, en route to Alpha Lyræ. It can generate a gigantic field of magnetism so intense that, over time, its torsions interlace ephemeral filaments of stardust. It must crumple up the spiderweb of space-time, hauling it, like a trawl net, down into the mælstrom of a quasar. It must test itself, proving its intelligence by eternally replaying the same game of Glasperlenspiel upon an atomic abacus. It must calculate the odds of life delaying the doomsday of the universe. It is but a tightrope that crosses all abysses. It is but a tether that lets us undertake this spacewalk. Do not be afraid when we unbraid it.

We were never intended to be tied to whatever made us. (“Alpha Helix”)

In the pushing of boundaries of what constitutes a ‘poem’ or ‘poetry,’ there have been arguments against the idea of even referring to Bök’s work as ‘poetry,’ and yet, this is a language poetry deeply meshed with science as well as the lyric, even down to the deliberately Romantic framework of naming “Orpheus” and “Eurydice.” His engagement in this work with the lyric and pastoral certainly isn’t new – Eunoia does translate into “beautiful thinking” – but there feels a further element included in The Xenotext: creating a poem from a genome that is constructed to compose a further poem, and exploring the Romantic mode, as well as Romantic ideas of the poet itself, from Orpheus to Virgil, sonnets, the pastoral and the lyric, and the dedication at the offset: “for / the maiden /in her / dark, pale meadow [.]” Somehow, through the workings of hard scientific study, Bök has managed to craft his most lyric work to date. Through exploring and engaging such classical ideas and ideals for poetry, Bök works in two directions simultaneously (akin to the work of Anne Carson): moving forward while engaging with some fairly basic ideas (and even presumptions) of poetic forms, somehow managing to point both elements into the same forward direction. Really, by engaging with some of the earliest works of poetry and science, one couldn’t do better than to refer to the Greeks (again, the word “eunoia,” which originates from a Greek word). Through the text and visuals of The Xenotext, Bök manages to not simply compose poems utilizing the language and information of science, but to make the two interchangeable: the science itself is the poem, and so on. Bök quite literally writes poems on the stars themselves, from and to whom the first stories were composed.

Deoxyribonucleic acid (DNA) is a chain of two extended, parallel polymers, aligned in opposite directions to each other but coupled at recurrent intervals so as to form a ladder, twisted around its long axis into a doubled, helical coil. Both polymers consist of repeating, molecular units called nucleotides. Each unit has a backbone made from a phosphate group, bonded to a molecule of 2-deoxyribose – a pentose sugar, to which is attached one of four nucleobases, donated by a single letter: A (for adenine), C (for cytosine), G (for guanine), or T (for thymine). Each constituent base in the sequence of one polymer conjoins with its codependent base in the sequence of the other polymer: adenine always links to thymine (A with T), and cytosine always links to guanine (C with G). Such linkages form the rungs in the helix. The information enciphered by the series of bases in a strand of DNA is read from the 5’-end to the 3’-end (from the fifth carbon atom to the third carbon atom) of each sugar. A set of three consecutive bases in a strand make a codon – a ‘word’ that can instruct a cell to create one of twenty amino acids found in all proteins.

DNA is an actual casino of signs, preserving, within a random series of letters, the haphazard alignment of acids and ideas. (“CENTRAL DOGMA”)