My body is unremarkable, not at all singular, as I walk up to join these other bodies, and it remains unremarkable, not at all singular, as it walks with others, takes off into the street when others do, usually after someone yells block up block up into a megaphone. Then we walk together and yet unevenly out into the street, darkly clad because the facebook invitation said to wear black, in small groups, some faster, some slower, some holding hands, some on bikes, some with canes, sometimes someone in a wheelchair. There is always a megaphone at the front. And then a second later, someone usually on a bike, off to the side, blocking traffic until we cross the intersection. This person calm, smiling.

I have a tendency to anxiously slow down. I also stay to the side. I am nervous, anxious. I want to keep saying this. I am an anxious body. Shortly after we step out into the street, the white vans, which have been idly waiting nearby, pull out and the motorcycles drive up from behind. Engines then and bright directed lights. (“Brent Crude”) 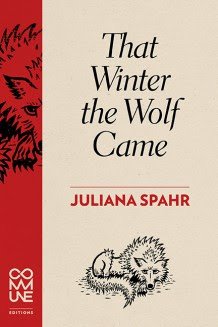 American poet, editor, collaborator and critic Juliana Spahr’s most recent title is That Winter the Wolf Came (Oakland CA: Commune Editions, 2015), a collection that furthers her engagement in social justice, environmental concerns and political anxiety, as well as her use of repetition, chant and unrelenting accumulation. Really, to call Spahr’s poetry books “collections” is a bit of a misnomer: her poetry books are created very much as book-length works, and less a “collection” of scattered pieces that somehow group together, whether deliberately or accidentally, into a theme. That Winter the Wolf Came is a direct result of, and response to (as the inside flap informs), “this era of global struggle.” The blurb continues: “It finds its ferment at the intersection of ecological and economic catastrophe. Its feminist and celebratory energy is fueled by street protests and their shattered windows. Amid oil spills and austerity measures and shore birds and a child holding its mother’s hand and hissing teargas canisters, it reminds us exactly what we must fight to defend with a wild ferocity, and what we’re up against.” Spahr is both author and co-editor/publisher of Commune Editions [see their collaborative “12 or 20 (small press) questions” interview here], a press founded to produce works very much in keeping with the kinds of poetry Spahr writes around global social and environmental issues. Over the past couple of years, I’ve become far more aware of poets across North America working such social and political issues into their works (some of whom have been working in such veins for years), from Canadian poets Stephen Collis and Christine Leclerc to Jordan Abel and Marie AnnHarteBaker, and Shane Rhodes and nikki reimer (among others), as well as Commune Editions Spahr and Joshua Clover [see my review of his recent Commune Editions title here]. It seems a number of the language poets have reclaimed what was once referred to (neither enthusiastically nor complimentary) as “political poetry,” allowing the language to enhance and beautifully articulate what had been done so rarely well, and far-too-often presented as dogmatic.

It was all good and it was all fucked while it lasted. But eventually Non-Revolution and me were over. It was not that one day I woke up and knew it was over. What we had, Non-Revolution and me, was like all relationships, built to last. But unlike many relationships, everything was against us. Yes, we cared for each other. Yes, we learned to tend to each other’s wounds too, to medicate and to bandage. But we suffered from a larger social lack of care or worse a relentless disdain. We were together but we were in it alone at the same time. Except the state was there with us in all sorts of ways. And we suffered from too much of a different sort of care from the state. And we knew history. We knew we would not be together long. (“It’s All Good, / It’s All Fucked”)

In nine extended poems, including prose-poems, Spahr is adept at pulling apart an idea and stretching it across a wide canvas, composing pieces out of a staggering amount of small detail. Hers are incredibly complex, complicated and straightforward poems made of multiple working parts towards a single purpose. One element I’ve always admired about Spahr’s poetry is the way in which she uses the direct statement (akin to Canadian poet Lisa Robertson), pushing the use of accumulation and repetition so relentlessly that the poem reads as a kind of chant, or mantra. Her cadences are hypnotizing, and hold such incredible beauty.