SHE APPEARS IN FULL COLOR, with her then husband, the young Boston poet Joe Dunn, on the jacket of the biography Lewis Ellingham and I published in 1998 (Poet Be Like God: Jack Spicer and the San Francisco Renaissance, Wesleyan University Press). As Carolyn Dunn, she was one of the central figures in a pivotal moment in Spicer’s life, his removal from Berkeley and San Francisco, where he had spent his twenties trying to carry on the dreams of the “Berkeley Renaissance” he had enjoyed in the immediate postwar period with his peers, gay poets Robin Blaser and Robert Duncan. It was a fellowship which, once broken by cold war politics and emerging aesthetic disagreements, could never be totally mended, and it was to New York, and then to Boston, to which Spicer hurled himself in the summer of 1956. New York had its own circle of poets and artists, but Spicer couldn’t or wouldn’t ingratiate himself to Frank O’Hara, John Ashbery, Schuyler, Guest and the rest. But in Boston, where Blaser found him a job at the main branch of the Boston Public Library, he found a camaraderie and alliance with some talented, Black Mountain-inflected poets – among them John Wieners, Steve Jonas and Joe Dunn.

When Lew and I were writing the life of Spicer, it became clear that this Boston year was the hinge in Spicer’s life, and yet who was there to tell us what it was like firsthand? Blaser was generous with his memories, but Jonas was long gone (he died in 1970), while Wieners and Dunn gave only partial accounts of their movements in the group. Spicer fell in love with the 21-year-old Joe Dunn, already a married man when the two met, and eventually persuaded both Dunns to leave Boston with him and seize the moment in a revitalized San Francisco, in late November 1956. Thus Carolyn Dunn was an eyewitness, and probably the only living one, to two defining moments in what was soon to be called The New American Poetry – the so-called “Boston Renaissance” and the world created by Spicer’s “Poetry as Magic” workshop in San Francisco [in] the spring of 1957. I remember saying to Lew, wouldn’t it be great if Carolyn Dunn was alive and we could track her down and meet her? But it was not to be, and our book came out without any direct input from her. (Kevin Killian, “Eyewitness”) 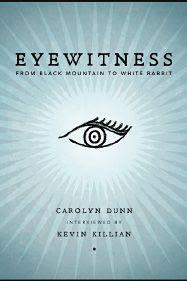 I’ve been intrigued by Eyewitness: From Black Mountain to White Rabbit, Carolyn Dunn interviewed by Kevin Killian (New York NY: Granary Books, 2015), a project that even Killian himself in his introduction describes as a piece of unfinished business from the incredible biography of the poet Jack Spicer (1925-1965) he wrote with Lewis Ellingham, Poet Be Like God: Jack Spicer and the San Francisco Renaissance (Wesleyan University Press, 1998). Fortunately for Killian, and for the interest of attempting to track a period of Spicer’s life that has yet to be fully explored, they were able to talk to Carolyn Dunn, who had reached out to Ellingham after the publication of the Spicer biography. Seemingly constructed out of a single phone conversation, Carolyn Dunn comes off as delightfully charming, highly attentive and feisty, able to describe numerous scenes in generous detail, from her own life and knowledge of Joe Dunn, to Dunn’s White Rabbit, publisher of so many of those early poets (including Spicer and George Stanley, among others), to Jack Spicer specifically and other scenes involving their time at Black Mountain College.

KK. So you and Joe were reunited in Boston, living once more on Beacon Hill, and reconnecting with the Boston poets. And that’s about the time Jack Spicer, defeated by New York, scarred by the New York poets’ indifference, arrived in Boston to make a new start in poetry. Can you remember how it was that you came to meet Jack Spicer?

CD. When we first returned to Boston, Robert Duncan was in town also. He had been teaching at Black Mountain briefly and Joe had studied with him there. So Duncan introduced Joe and me to his old San Francisco buddy, Jack Spicer, and through those two we met their other good friend Robin Blaser, who also was in Boston at that time. Our close pal John Wieners was back there too. Steve Jonas had been in Boston all along, and John and Joe had met him before going to Black Mountain. Duncan soon returned to SF, but the rest of us (except for Blaser) ended up living quite near to each other, in adjoining buildings on Grove Street. All of Beacon Hill was covered with adjoining brick apartment buildings. There was a ritzier side of the hill, which may have been to some degree inhabited by the owners, but our area was all rentals as far as I know. The population there included many students and artists, so it was sort of a bohemian community.
I can see why Jack would have been reinvigorated by hanging out with the Boston poets. They were younger, but every one of them was talented and serious about his work and appreciated all of his most generous help. Jack, in turn, was very patient and […] encouraging. I can’t imagine how the New York poets could mock a man who was so intelligent, well-read, and wickedly witty.

Produced in an edition of three hundred copies, it will be curious to see if the publisher was correct in their assessment of potential interest, or if this interview will be seen in the context it appears to have been created out of: as a direct extension of the work Killian did on Jack Spicer’s biography. One can only hope that there is an interest a bit higher than three hundred. For some time now, Granary Books has worked hard to produce a great number of very attractive, large and short run titles focusing on acknowledging and expanding our knowledge of a variety of literary histories (my first awareness of the press came from their 2001 title, The Angel Hair Anthology, collecting a ‘best of’ Anne Waldman and Lewis Warsh’s legendary and influential 1960s magazine Angel Hair, along with their subsequent small press publishing), and this title shines a curious spotlight on a less-known period of American writing generally, and Jack Spicer specifically. I only wish it might have been longer.